The Midtown site that was to be the Atlanta debut of luxury hotel operator SBE is up for sale. 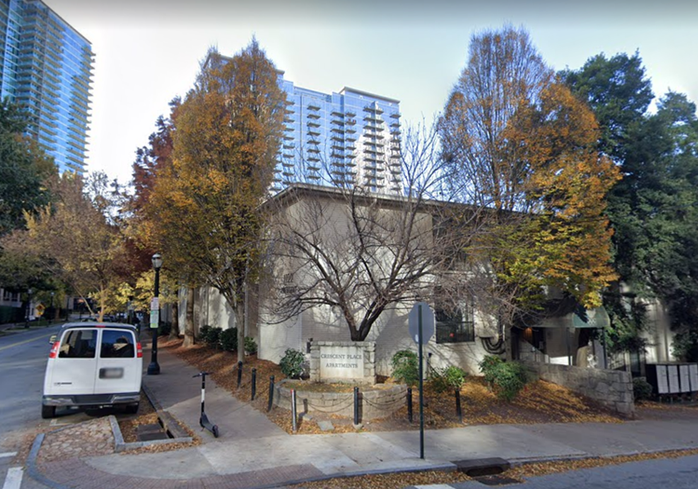 Google Maps
Crescent Place Apartments, whose site is up for sale by Trillist Cos.

Atlanta-based Trillist Cos. planted the for-sale sign at 1122 Crescent Ave, a 0.65-acre site that houses the low-rise Crescent Place Apartments and is the location planned by a Los Angeles-based hotel operator to open Atlanta's first SLS boutique hotel. Cushman & Wakefield has been tapped to market the apartments and property, which is zoned for high-density mixed-use, according to a marketing package obtained by Bisnow.

Officials with Cushman & Wakefield declined to comment other than to say that a deadline for best-and-final offers from investors has not yet been determined. Officials with Trillist did not return numerous messages seeking comment.

“We have a signed [hotel management agreement] and are excited to bring SLS to the Atlanta market,” an SBE spokesperson said in an email to Bisnow. The company declined to comment further.

For now, Trillist appears to be more focused on a site quite literally across the street at the intersection of 13th and Peachtree streets. There, the developer is seeking to develop a 46-story mixed-use tower with 317 apartment units and 10K SF of ground-floor retail. It is to be built upon an eight-story, 450-space parking deck, according to the Midtown Alliance's development review committee.

Trillist and SBE first announced the partnership and SLS Atlanta development in 2016. The 42-story tower was to consist of 213 hotel rooms and suites, 56 condominium units and a variety of restaurant and entertainment establishments, an aspect SBE is known for.

“Currently, there is a dearth of high-quality, fashion-orientated condominium residences in Atlanta. We expect that residents of this great city will welcome the unique design and engaging environment located within SLS Atlanta, which will set a new standard in mixed-use development,” Trillist CEO Scott Leventhal said in a release in 2016.

By the fall of 2016, Trillist added an extra floor to the tower with 10 more condo units, according to records from the Midtown Development Review Committee. Despite the organization's blessings, Trillist never broke ground on the project.

There is little doubt that developers, especially from outside Atlanta, will be yearning for this site. City Realty Advisors founder Tim Holdroyd said he estimates the site could fetch upward of $20M, which would be more than $650 per SF. But developing the site is harder than it seems, Holdroyd said, especially when it comes to parking.

“You can't build an efficient parking deck on that site. It's not long enough or wide enough,” Holdroyd said.

Trillist was planning to develop a 12-story parking deck at the base of the tower. Due to the constrained size of the lot, the deck would be too compressed to be efficient, according to Holdroyd and other experts Bisnow spoke to. That would put costs on the deck at $50K per space or greater, where typical parking decks cost $30K per space.

“Your construction costs are going to be brutal on a small site like that,” Ackerman & Co. Senior Vice President John Speros said. “It's a great site, but it got its challenges because of its size.”

Speros estimates for a hotel to erect at the site, it would need to command between $300 and $400 per night.

“You'll get that during the week sometimes, but not on a consistent basis,” he said.

This is not SBE's only expansion setback. Last year, Peebles Corp. pulled out of a deal to develop an SLS hotel and condominium in Washington, D.C. It announced earlier this month plans for two of its Mondrian-branded hotels in Mexico as well as projects in Seoul, Cannes and Bordeaux.

CORRECTION: FEB. 24, 12:15 P.M. ET: A previous version of the story was written in past tense when speaking of the Crescent Place Apartments. The apartments still exist today.