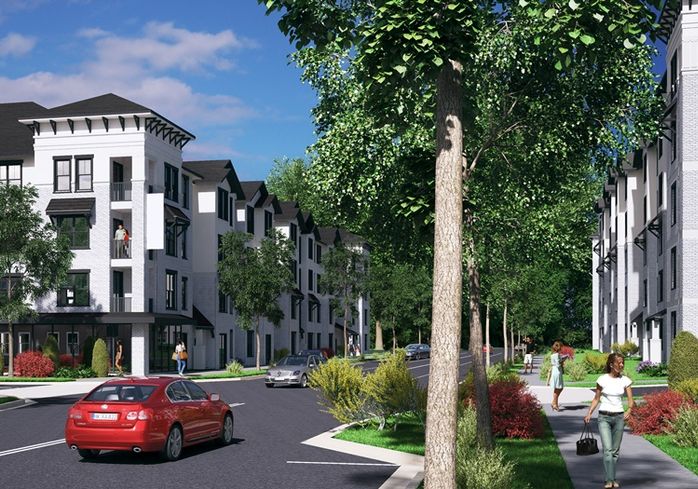 Courtesy: The Prestwick Cos.
Rendering for The Eddy at Riverview Landing apartment project in Smyrna

Kayaks and co-working and apartments, oh my!

Prestwick Cos. is moving forward on The Eddy at Riverview Landing, a 310-unit luxury apartment complex in the planned Riverview Landing mixed-use community in Smyrna. The developer is breaking ground on what is the first phase of the 82-acre Chattahoochee River-fronted project, under the master planning of Ardent Cos.

The Eddy will have an 8K SF commercial building with a restaurant, coffee shop and co-working space, officials said in a release. But the complex will also have direct access to Riverview Landing's park lining the Chattahoochee, complete with a kayak launch, public dock and a community theater.

The apartments will range from one- to three-bedroom units, starting at $1,150/month, according to company information.

The site has long been planned for major development. For roughly a decade, Atlanta-based Jamestown Properties — which developed Ponce City Market — was trying to make the riverfront property work for a major project. But in 2017, Jamestown sold the site to Ardent, which downsized the former developer's project scope, according to the Atlanta Journal Constitution. Some 12 acres of green space is expected to be deeded to the city of Smyrna as a public park.

Delivery of the The Eddy is slated for the spring of 2019.