Amazon Is 'Going Gangbusters' Looking For Distribution Space Around Atlanta

Even after securing more than 4M SF of warehouse and distribution space in Metro Atlanta in recent months, Amazon is on the hunt for more as it struggles to meet demand during the coronavirus pandemic. Unsplash/Bryan Angelo
One of the hundreds of Amazon facilities around the country.

The pandemic has been a big reason for Amazon's rush to grab space going forward: The online retailer's business has expanded quickly as more consumers resort to shopping online during widespread shelter-in-place orders.

“This has strengthened them from a delivery standpoint. It solidifies shopping at home. They're going gangbusters,” a source familiar with Amazon's industrial growth plans in Metro Atlanta told Bisnow. “They're always going to be looking for space, especially now. This [pandemic] has been the accelerant on the fire.”

It was unclear as of press time how many facilities Amazon was seeking beyond its current portfolio in Metro Atlanta, which spans 16 warehouses across more than 8.9M SF, according to Transwestern.

Among the many potential sites in Metro Atlanta, sources told Bisnow Amazon was exploring a former Core5 warehouse facility in Pendergrass, 60 miles north of Downtown Atlanta along Interstate 85.

Core5 sold the empty 1M SF warehouse last year to Property Reserve Inc., a Salt Lake City-based commercial real estate company that represents The Church of Jesus Christ of Latter-day Saints. According to Jackson County tax records, the sale price was a little more than $46M. Core5 developed the building on spec in 2018.

Matthew Simonsen, an asset manager with Property Reserve, didn't deny his firm was in talks with Amazon when reached via email.

“There's no story here. We're not even close to being done with a deal and have nothing in writing,” Simonsen wrote, declining to respond to further questions. Amazon officials didn't respond to inquiries as of press time. 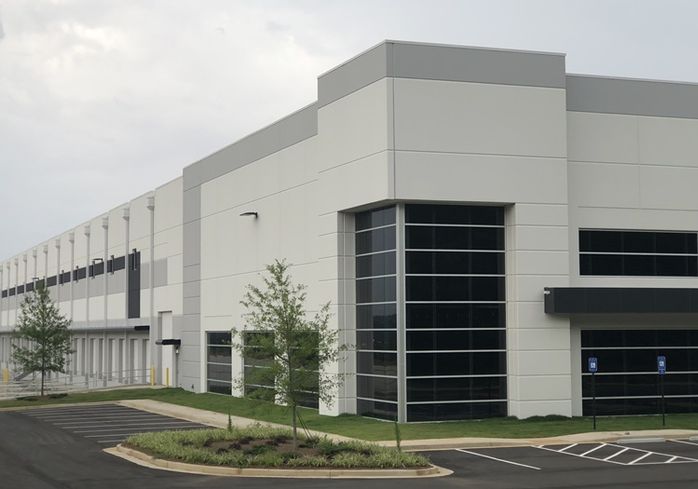 Amazon's activity is helping to buoy some industrial pros' optimism about the sector despite the economic fallout from the pandemic. While most retail is shut down, Amazon and other companies with robust e-commerce platforms delivering essentials are seeing demand surge.

“I will tell you just from talking to colleagues around the country that Amazon, Walmart, Procter & Gamble, Kimberly Clark ... all those companies are just killing it right now,” Newmark Knight Frank Senior Managing Director Dave Watson said. “They're directly tied to paper products and things that are doing well during the virus.”

Industrial hasn't been immune to virus-related slowdowns, however. In the first quarter of this year, tenants absorbed 654K SF of Metro Atlanta's nearly 630M SF warehouse stock, just the second quarter in seven years where absorption tallied under 1M SF in the hot Metro Atlanta industrial market, according to a report by Newmark Knight Frank.

Dermody Properties partner Greg Ryan said the coronavirus's spread in China hit the industrial sector even before it was declared a global pandemic by the World Health Organization on March 11.

“The slowdown in the first quarter was in anticipation for a possible spread that was already going on in China,” Ryan said. “Industrial is expected by everyone to come out on top.”

Aside from Amazon's two leases, Walmart inked a 1M SF lease in Jackson County at Valentine 85 Logistics Center, according to Colliers. Other big deals signed in Q1 included Mondelez Global with 571K SF at Parkway West Commerce Center and Nestlé Purina with 570K SF at 5005 Terminus Drive, according to NKF.

The fact that more consumers, especially those outside the millennial generation, are being pushed to online shopping is keeping many in the industry positive about the prospects for industrial.

By the end of March, the Amazon Prime membership base grew to 118 million consumers, with signs of extra growth during the last two weeks of the month, Consumer Intelligence Research Partners reported, according to TheStreet. Conversion rates from a free Prime trial to paid membership increased to 70% in March as, even as it dwindled in recent years.

“I think industrial is going to come out the best because we have these stay-at-home orders, that has been forcing people who haven't been [online shopping] to do it a lot,” King Industrial Realty President Sim Doughtie said. “It doesn't surprise me that Amazon and Walmart, which are like the biggest at what they do, are expanding.”