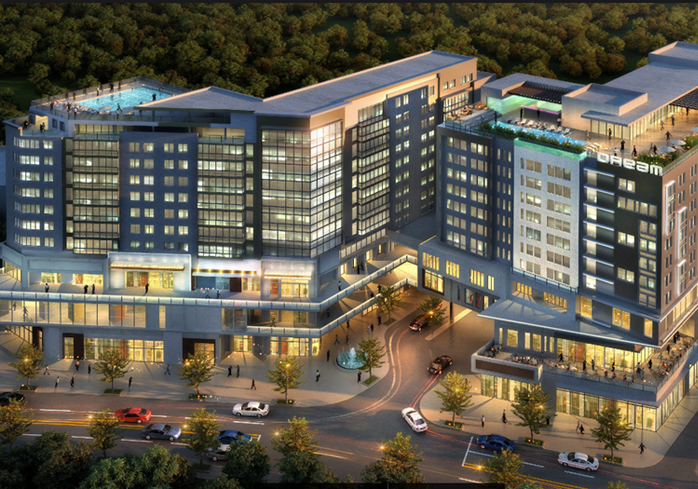 Courtesy: The Dream Hotel Group
Rendering, designed by Cooper Carry, for the planned Dream Hotel in Buckhead off Roswell Road

An upscale lifestyle hotelier with locations in Manhattan, Los Angeles, Bangkok, Miami and Phuket is dreaming of an Atlanta location next.

Dream Hotel Group has inked an agreement with Atlanta-based Cartel Properties to open a new, 200-room hotel in Buckhead. The location will be Dream Hotel's first in Atlanta and will be developed at the current home of a single-story shopping center off Roswell Road, currently home to The Big Ketch Saltwater Grill.

The $100M-plus project will include the hotel as well as a separate building with retail, office and residential space, Cartel Properties partner John Frasier said.

New York-based Dream Hotel operates high-end hotels that aim for surreal and contemporary chic interior designs reflecting the local markets. The Atlanta property, in the Buckhead Village, also will include 90 private residences, a spa and wellness center and five dining and nightlife venues, including a 17K SF rooftop pool bar and lounge, according to the company.

Dream Hotel places an emphasis on dining and nightlife entertainment at its other locations. For Dream, Atlanta represents an opportunity to capitalize upon a similar customer that it sees in New York and Los Angeles: Hollywood.

“Dream Hotel Group was attracted to the Atlanta market and Cartel Properties in large part due to the state’s thriving film industry. The Dream Hotels brand has a solid presence in New York City and Los Angeles. We’re known for our unique narrative and as the brand of choice within the creative community,” Dream Hotel Chief Development Officer David Kuperberg wrote in an email. “We are confident this same relationship will translate to Atlanta’s film and entertainment industries.”

Officials with Cartel and Dream Hotel did not disclose the specifics of financing the project, but Frasier said the project could break ground within 18 months.

“A significant amount of the capital is secured,” Kuperberg said. "We are in active discussions with additional debt and equity partners."