The developer of a much-hyped luxury condo tower in Atlanta has fallen behind on payments to its contractors. 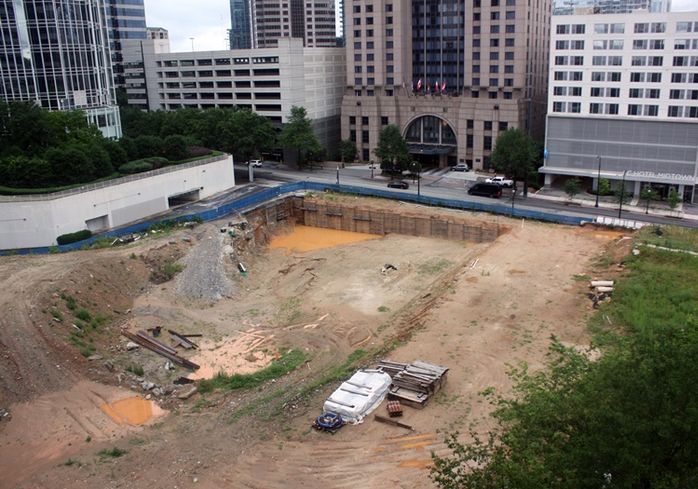 Bisnow
Recent rains pool at the construction site of No2 Opus Place in Midtown Atlanta.

Olympia Heights Management, the developer of the No2 Opus Place condominium tower in Midtown Atlanta, has had liens filed against it by two of its contractors, Yates Construction and DAZ Construction Inc. The companies allege nearly $360K of combined unpaid bills for work on the project, which is a languishing, unfinished hole in the ground at 98 14th St.

In a phone interview this week, OHM Director of Development Roni Avraham said he is aware of the two liens, adding that the company plans to pay both parties once they reopen marketing the condo project, perhaps as soon as next week.

OHM is owned by Shaya Boymelgreen, a developer from New York with a checkered past. His company acquired the site in 2014 and planned to build a three-tower project, highlighted by the tallest residential tower in Atlanta. In the years since, the plans have undergone a series of changes, and OHM is now approved to build a single 53-story tower with 182 condo units and more than 200K SF of office space.

OHM hired Yates last year to perform site work on the property, which has been stuck in pre-development for years. Yates filed a lien against OHM in Fulton County Superior Court May 11 for $299,454 in unpaid work that was due May 9.

“We put the lien on the job just to protect ourselves, but we expect to get paid,” Yates spokesperson Kenny Bush said. “Basically, they are blaming it on the COVID, the pandemic. I think all businesses are having capital investment issues, cash flow issues, everything dealing with their finances. Not just in Atlanta. That's all over the country.”

Yates hired DAZ as a subcontractor to do excavation work at the site six months ago, DAZ owner Daniel Bryson said. DAZ Construction filed a lien April 14 against the developer for $57,754, a bill originally supposed to be paid on Feb. 27, according to the lien document. Bryson said his office staff told him OHM kept delaying its payment to DAZ and finally blamed the pandemic for having to shut down the operation.

“I told them, ‘Well, I hope everything gets worked out, but I got to protect my rights,’” Bryson said.

When asked if he expects OHM will pay his bill, he replied, “I expect to be paid.”

Avraham said OHM plans to make the overdue payments “once we start to work, as soon as possible.” 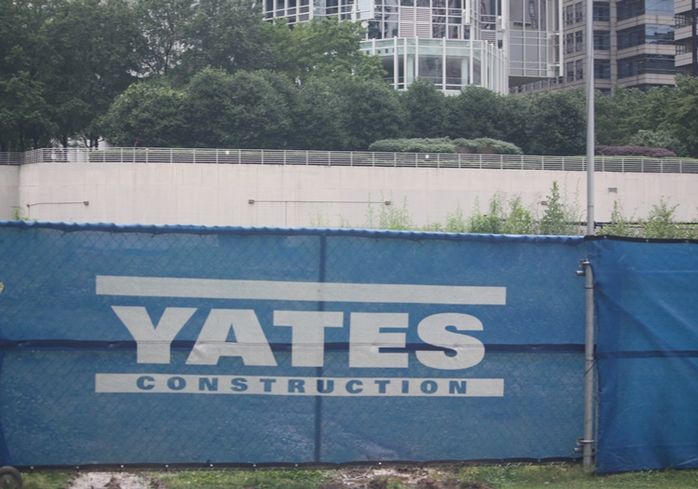 The No2 Opus Place project promises prospective buyers sweeping views of Midtown and Downtown Atlanta and access to a resort-style pool, high-end restaurants, a spa, a wine tasting and storage room, an IMAX theater and 24-hour concierge services.

Liens are a powerful tool that contractors can use to force developers to pay bills for construction work, said Mark Cobb, a veteran Atlanta construction lawyer.

“Liens are remarkable devices,” he said.

A contractor has 90 days from the time work is completed to file a lien against a developer for unpaid work. Once filed, the lien becomes a legal strike on the property: If it sells, the lien ensures that the seller must first pay off its debt before transferring the land title.

After a contractor files a lien, it has one year to either recoup the money owed before the lien expires or it can sue its debtor and foreclose on the property, said Cobb, the founding partner of Cobb Law Group.

While a sign of tension between developer and contractor, liens aren’t a reliable indicator of the financial trouble a project may be facing, Cobb added. With the economy in the tank due to the shock of the pandemic, lien filings are spiking, he said.

“It can mean something's gone sideways. It can also mean slow pay,” he said. “Even if you think you're going to get paid … you still want to file a lien. People want to protect their interests.”

Aside from the liens, OHM has $22M in outstanding debt on the property that has passed its most recently reported maturity date. Last year, OHM refinanced the existing debt on the site with Ardent Cos., and the new loan was scheduled to mature in January. Olympia Heights had the right to extend that maturity date by three months. Officials with Ardent Cos. declined to comment.

“I'm not dealing with that,” Avraham said when asked about the loan. “I don't know.”

In January, OHM tapped Cushman & Wakefield to market over half of the 4-acre Opus Place parcel for an undisclosed price. Avraham told Bisnow this week that the property was still on the market. But the pandemic put the kibosh on those plans, C&W Managing Director Matt Hawkins said.

“It's not currently on the market,” said Hawkins, adding that most of his office’s listings were taken off the market as the pandemic hit. “Did we have offers? Yes.”

Little has changed on the site since 2019. The prime piece of property is surrounded by some of Atlanta’s most prominent towers, including 1180 Peachtree, the Four Seasons, Norfolk Southern’s headquarters and the Proscenium.

When a reporter visited the site Wednesday, it was little more than a dirt hole, largely the same as it was last year when Bisnow investigated the project. Yates’ construction trailer, which had been stationed on the property last year, was no longer on the site.

While two cars were parked outside No2 Opus Place’s $3M sales office, its lights were off. The center is closed due to the pandemic except for pre-scheduled tours, Avraham said. Its door had a sign on it that says, “Unfortunately, due to the corona virus outbreak, we will be open by appointment only for the time being.”

Whether No2 Opus Place will ever rise above the Atlanta skyline depends on if OHM can secure construction financing for the project. Typically, construction lenders want a developer to pre-sell 40% to 50% of the building, with buyers putting down a 10% deposit. OHM has claimed in the past that it has achieved the necessary pre-sales, but it has yet to land financing.

A year ago, Avraham told Bisnow that the developer had pre-sold 70 units. This week, he said 50 units had pre-sold, but he said each buyer has put at least 10% down. It is difficult to verify pre-sales in Georgia. A sale is not typically recorded in local deeds until it is fully consummated. Multiple Atlanta brokers were skeptical of the figures OHM was touting last year.

"I don’t think that project is viable," a broker told Bisnow last year. "Because it just doesn’t seem to go anywhere, and the story changes all the time.”

Avraham acknowledged OHM needs to pre-sell dozens more units before it can land a construction loan. If it does, he believes Yates will come back to build the project, despite the $300K lien the contractor filed against his company.

“It doesn't matter,” he said. “We’re still using Yates. Yates is going to do the construction.”