The owner of a long-planned luxury condominium tower in Midtown Atlanta is trying to sell part of its property as a loan on the project is soon to come due. 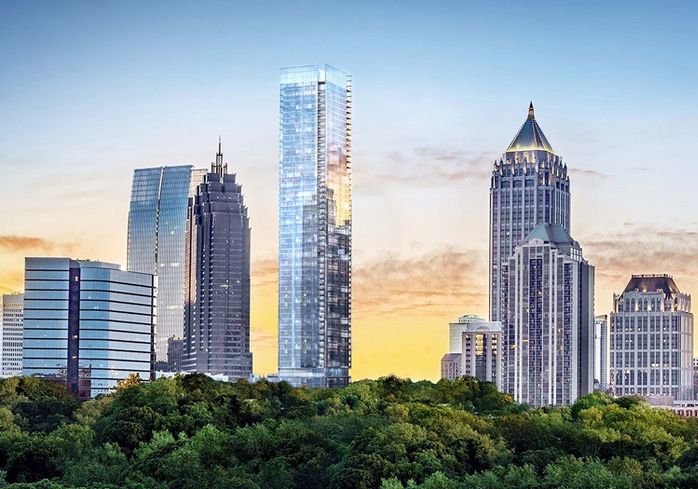 ArX Solutions
Rendering for the proposed No2 Opus Place, designed by Perkins and Will and being developed by Olympia Heights Management.

Olympia Heights Management has tapped Cushman & Wakefield in Atlanta to market over half of its 4-acre parcel at 98 14th St. — formerly known as the Symphony Center site — for an undisclosed price. Cushman & Wakefield confirmed it has been tapped to market part of the property, but officials declined to comment further.

The total site was originally slated for three towers, including a 53-story, 182-unit condominium luxury tower known as No2 Opus Place, which would be the tallest residential tower in Atlanta at 730 feet. The portion of the property being listed for sale is not the parcel that includes No.2 Opus Place, officials said.

The offering would be enough to encompass more than 1M SF of additional office, apartments and retail space, the Atlanta Business Chronicle reported.

As they have in the past, Olympia Heights officials insist they are continuing to pursue the development of a skyline-defining luxury condo building, despite numerous delays and missed deadlines.

Avraham referred Bisnow to Berkshire Hathaway, the brokerage firm selling units in No2 Opus Place, for further comment. Berkshire Hathaway officials didn't return calls before press time. The most recent timeline for the project pegged construction to start last summer with an expected delivery date of 2021.

Olympia Heights' project could give Atlanta one of its first glimpses of luxury and lifestyle typically found in markets like New York, Tokyo, Miami or Los Angeles. Its residents would have sweeping views of Midtown and Downtown Atlanta and access to a resort-style pool, high-end restaurants, a spa, a wine tasting and storage room, an IMAX theater and 24-hour concierge services.

Asking prices in the building range from $600K to $12M, according to Berkshire Hathaway’s website. Prices start around $600 per SF for lower-level units, but will rise to above $1K per SF for the penthouse units.

The prices Olympia Heights is targeting have rarely been achieved in Metro Atlanta, a market where the average first-generation condo unit sells for around half as much per foot. On the higher end, condos have sold for $800 per SF.

Several announced dates for an official groundbreaking have come and gone. No2 Opus Place's website links to press clippings from 2016, 2017 and 2018 announcing the beginning of construction. Throughout the years, trucks have appeared on the site at different points, moving dirt around in an effort to show as if construction is imminent.

The developers continue to refinance the land with short-term loans, and the construction firm working on the site told Bisnow this past summer that there are no plans to go vertical anytime soon. Many in the Atlanta residential real estate community previously expressed skepticism that Olympia Heights would ever build the project.

After purchasing the property at 98 14th St. for $22M in 2014, Olympia Heights has reshaped plans for the project three times. Avraham declined to comment on why the firm decided to sell part of its parcel now, but the firm does have debt on the property coming due shortly.

Olympia Heights secured a loan last year for $22M from Ardent Cos., which matures this month. It has an option to extend the maturity date by three months, according to Fulton County deed records. Officials with Ardent declined to comment.

The loan with Ardent refinanced previous debt with New York-based Terra Capital Partners. Olympia Heights initially borrowed $24.5M in 2017, and in June 2018, Olympia Heights refinanced that loan with Terra, this time for $27.5M, which matured after six months, according to Databank.

Since buying the land and announcing it planned to build the tallest residential building in Atlanta, the New York developer Olympia Heights, Shaya Boymelgreen, was investigated by the attorney general in his home state for fraud and shoddy workmanship on several of his condo developments. He built thousands of luxury apartments in Manhattan and Brooklyn in the 1990s until his business essentially collapsed during the Great Recession.

Three years ago, Boymelgreen agreed to a two-year ban from selling condos in New York and paid some of the buyers back as part of a deal with then-Attorney General Eric Schneiderman.