"We can’t let one branch of government threaten the equality and rule of law in the name of a patchwork Constitution," said Vice President Joe Biden, speaking at Georgetown Law School Thursday about the Supreme Court nomination of DC Circuit Chief Judge Merrick Garland. 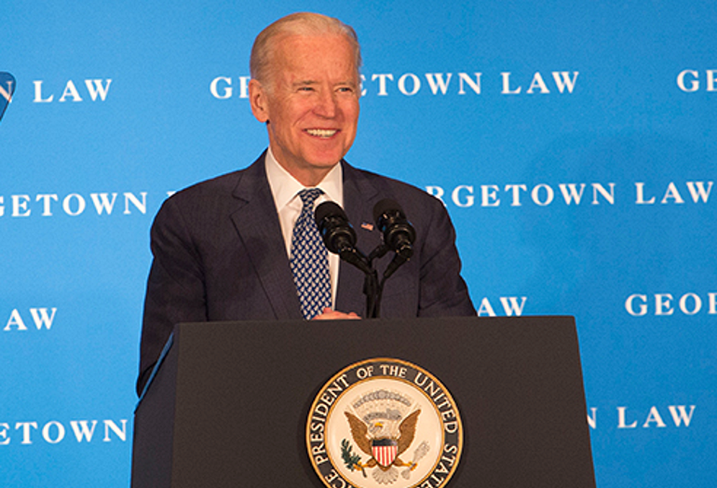 "The longer this high court vacancy remains unfilled, the more serious the problem we will face — a problem compounded by turbulence, confusion and uncertainty about our safety, our security, our liberty, our privacy, the future of our children and our grandchildren," Biden said.

"The Framers designed our system to give one Supreme Court the responsibility of resolving conflicts in the lower courts. If those conflicts are allowed to stand, we end up with a patchwork Constitution inconsistent with equal justice and the rule of law. "

A Supreme Court that splits 4-4 would be unable to establish uniform federal law on important issues that are before the Court today, Biden pointed out, such as race discrimination, separation of church and state, the right to a safe and legal abortion, and police searches.

"Even worse, a patchwork Constitution could deepen the gulf between the haves and have-nots. Under a system of laws, 'national' in name only, the rich, the powerful can use it to their advantage, the geographical differences, and game the system not available to ordinary people."

The Vice President also denied the existence of the "Biden Rule" that GOP members have invoked: "It’s, frankly, ridiculous. There is no Biden Rule. It doesn’t exist."

Half of Biden's 36 years in the US Senate were spent as either the ranking member or chairman of the Senate Judiciary Committee, during which he presided over or helped preside over nine nominees to the Supreme Court—more than anyone else alive today.

The 1992 speech from which the "Biden Rule" came happened as Biden discussed the speculation that a Supreme Court justice might retire so that Bush 41 would be able to nominate a replacement. (Biden then said that Bush shouldn't "name a nominee until after the November election is completed,” and that “the Senate Judiciary Committee should seriously consider not scheduling confirmation hearings on the nomination until after the political campaign season is over.”) The speculated retirement didn't happen.

Biden said he was speaking of the dangers of nominating an extreme candidate without proper Senate consultation, and he made it absolutely clear he'd have gone forward with the confirmation process as chairman if the nominee were chosen with the advice—not just the consent—of the Senate.

The remarks in questions concluded with him saying if the President consults and cooperates with the Senate, or moderates his selections, then his nominees may enjoy his support, as did Justice Kennedy and Justice Souter.

The nomination of Chief Justice Garland was partly due to his reputation as a moderate, said Biden. "The President did not go on and find another Brennan. Merrick Garland intellectually is as capable as any justice, but he has a reputation for moderation. I think that’s the responsibility of the administration in a divided government." Though some of his liberal friends do not agree with him, Biden said, "It's about the government functioning."

Before nominating Chief Justice Garland, the Obama Administration spent "countless hours meeting with and soliciting the views of senators of both parties," said Biden. "We’ve reached out. Who do you want? Who do you think? What type of person should we nominate?" He and the President did their duty, he said. "We sought advice. And we ultimately chose the course of moderation because the government is divided."

Partisan politics shouldn't hinder the work of the Supreme Court, Biden urged. "Dysfunction and partisanship are bad enough on Capitol Hill. But we can’t let the Senate spread that dysfunction to another branch of the government, to the Supreme Court of the United States."