Ginsburg: SCOTUS Is A 'Paler Place' Without Scalia

Yesterday, Justice Ruth Bader Ginsburg memorialized the late Justice Antonin Scalia during the Burton Awards in the Library of Congress. "The Court is a paler place without him," she said. 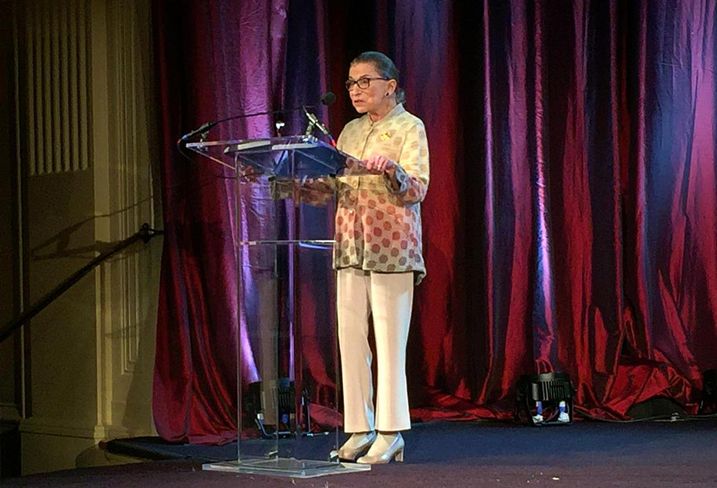 Justice Scalia passed away in February at 79.

Ginsburg referenced their mutual love of opera, quoting from the Scalia/Ginsburg opera, where the Scalia and Ginsburg characters sing, "We are different, we are one." She also quoted from Justice Scalia's preface to the opera, where he wrote the "utter peak of my otherwise uneventful judicial career" was an evening at the British Ambassador's residence where he sang with two tenors from the Washington Opera, which he called "the famous Three Tenors performance."

She said she missed the challenges and laughter he provoked, the roses he brought on her birthday and the chance to appear together in the Washington National Opera. Whenever she received a Scalia dissent, the majority opinion she wrote was much better for it, she said.

Scalia was possessed of a rare talent to make even the most somber judge smile, said Ginsburg. It's not so well known that he was also a discerning shopper, she added, referencing a trip to Akra, India, where they both picked out rugs.

When President Bill Clinton was considering his first SCOTUS nominee, Justice Scalia was asked with whom he'd rather be stranded on a desert island: Larry Tribe or Mario Cuomo? Scalia answered quickly and decisively, Ruth Bader Ginsburg. Within days, Ginsburg said, Clinton had nominated her. 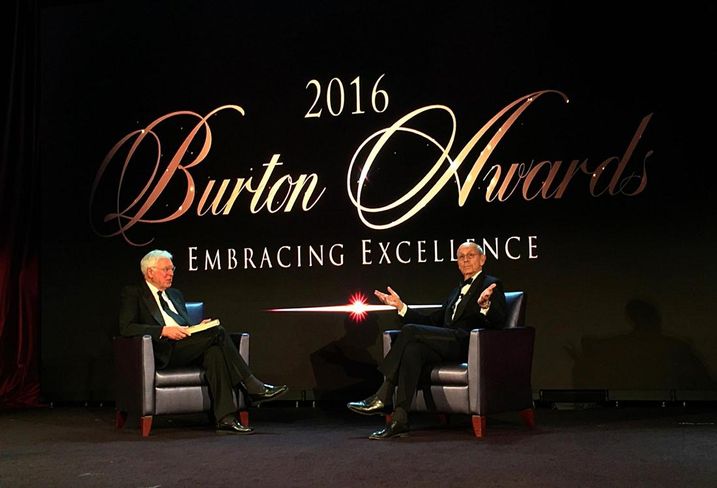 In Justice Stephen Breyer's discussion with emcee Bill Press, Bill referenced a recent quote from NY Times Supreme Court correspondent Adam Liptak (who picked up the evening's "Outstanding Journalist in Law" award), which says the "court is not deadlocked so much as diminished" with eight judges.

Is it? "No," said Justice Breyer. He doesn't feel the Supreme Court should decide everything, he said. Its role is to act as "border patrol" to keep laws from straying outside the frontier created by the Constitution. The Court is unanimous half of the time, he added, and votes 5-4 about 20% of the time. Breyer says he looked up the statistics for a recent year, and of 70 or so cases, Scalia's vote would have changed the outcome of four or five cases.

"We all miss him," said Breyer of Scalia. He was alive and a force, and it was more fun with him, he said, adding it's important to have people who think differently and can express their points of view.

Breyer also discussed his new book, The Court and the World: American Law and the New Global Realities, which received the evening's "Book of the Year in Law" award.

Twenty years ago, only one or two cases out of 70 or 80 required the Court to look abroad, Breyer said; today, it's 15% to 20% of cases. He wrote the book because he wanted to explain why the Court increasingly looks to international courts for some cases, what kind of cases these are and what issues they raise.

Critics of the Supreme Court looking to international courts may be worried about "American values" getting watered down somehow, said Breyer. He feels the best way to preserve American values is to participate in, or at least understand, what's going on beyond our shores. 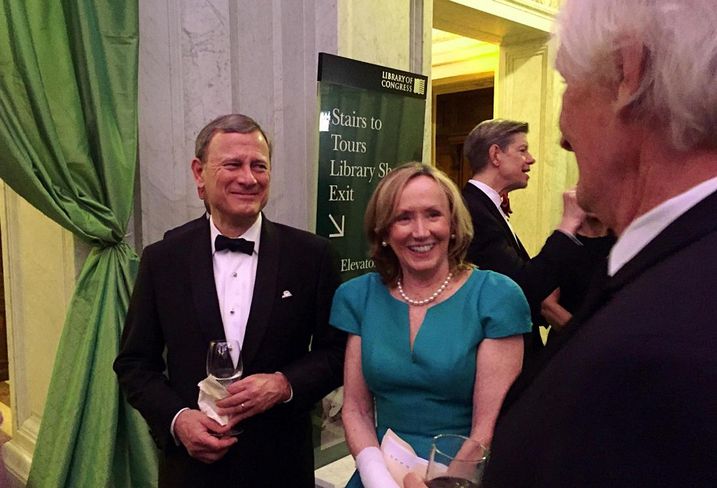 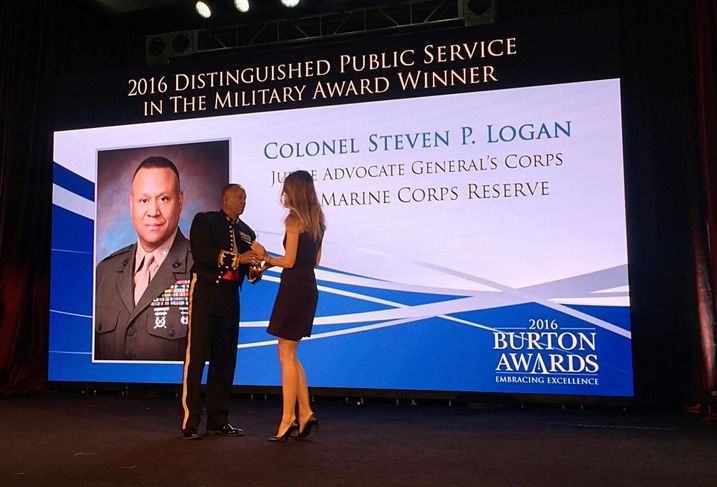 Col. Logan is a US District Judge for the District of Arizona and a former US Magistrate Judge. A Marine Corps colonel, he serves as an appellate judge on the Navy and Marine Corps Court of Criminal Appeals in DC. He's served two tours in Iraq and one in Afghanistan.

Other awards went to legends in law and to lawyers and law students for distinguished writing. 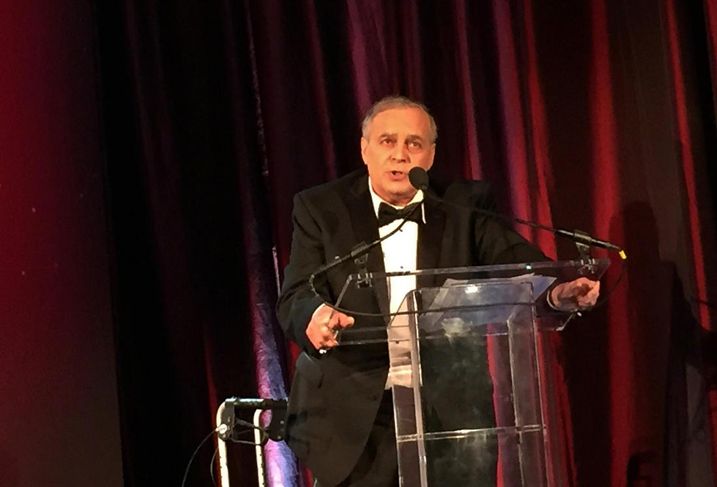 The Burton Awards were founded by William Burton, above, 17 years ago to reward excellence in the legal industry.

More than 400 judges and lawyers attended this year's event in the Library of Congress' Coolidge Auditorium and Great Hall. The awards evening honors legal achievement and excellence in legal writing. 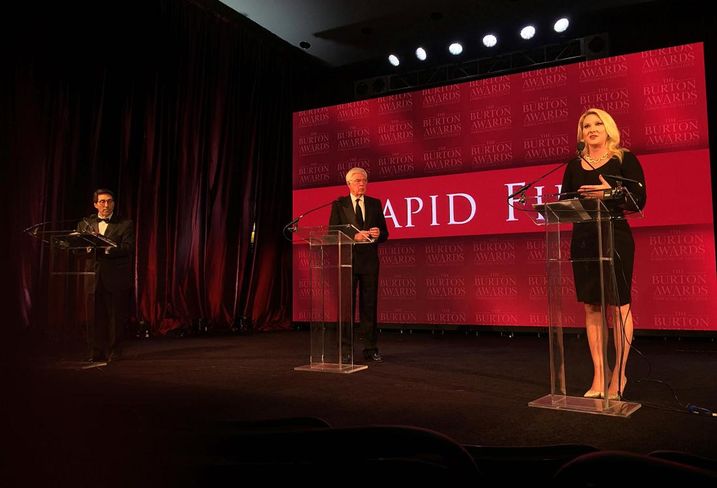 Arguing against the government's position was American Center for Law and Justice chief counsel Jay Sekulow and in favor was Constitutional Accountability Center president Elizabeth Wydra. 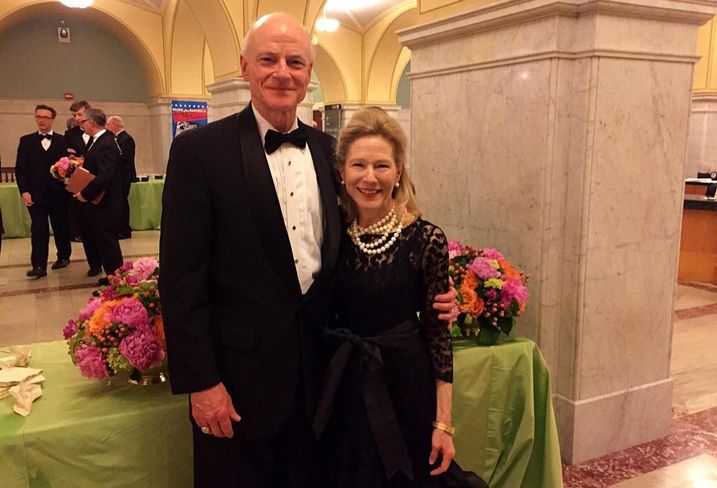 Nelson Mullins partner William Hubbard received the inaugural lifetime award for "Leadership in Law." We snapped him with his wife, Kappy. 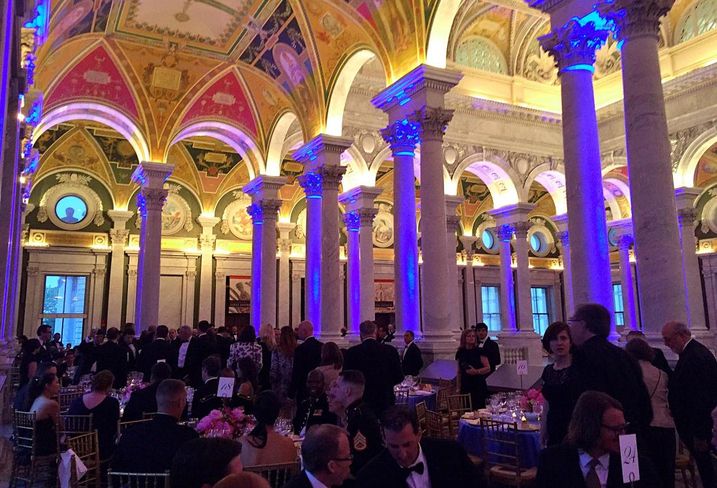 After the awards and a cocktail reception, guests headed upstairs for a three-course dinner and a performance by Broadway star Linda Eder in the beautiful Library of Congress Great Hall.