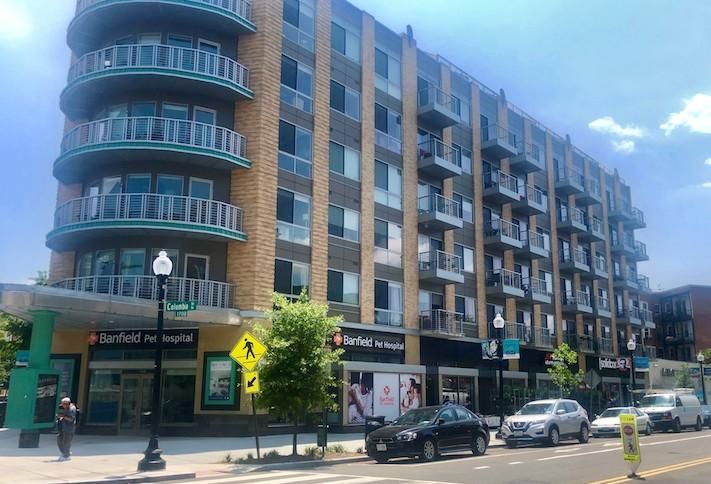 The ground-floor retail space in an Adams Morgan building has just traded hands despite one of its tenants being forced to close over the coronavirus.

Monument Realty sold the 9,160 SF of retail space at 1700 Columbia Road NW to an Ashburn-based private investor for $7.9M in a deal posted Thursday to the D.C. Recorder of Deeds.

A listing on Monument's website said the asking price was $8.6M. The D.C.-based developer and investor acquired the retail space in 2016 for $5.8M, property records show. It then leased the previously vacant, 2,500 SF corner space to the Banfield Pet Hospital.

Monument Realty founder Michael Darby told Bisnow Thursday the lease led him to put the property on the market.

"We had maximized the value by installing the Banfield Pet Hospital entity into the remaining space there, and having done that, we maximized our income and felt the market was buoyant at the time, and we sold it," Darby said. "The timing was very good. We sold it right before the slowdown here at a very competitive number."

The other tenants in the retail space are Ace Hardware and Solidcore. The fitness studio company last week announced it laid off 98% of its workforce because of the coronavirus. Darby said he doesn't know whether it will reopen in the Adams Morgan space.

"That’s not my problem, I sold the building," Darby said. "Hopefully for the new buyer there’s no problems, but the world has problems, so I can’t somehow feel responsible for a problem that didn’t occur during the time I owned it. I don’t have any responsibilities to the buyer for what happened thereafter."

Darby said the deal represents a new strategy Monument is pursuing to buy retail assets with vacancies, add value by leasing them up, then selling them. He said an economic downturn will lead to increasing retail vacancy and more opportunities to buy. He also expects the retail industry to bounce back in the future, giving him the confidence to purchase assets.