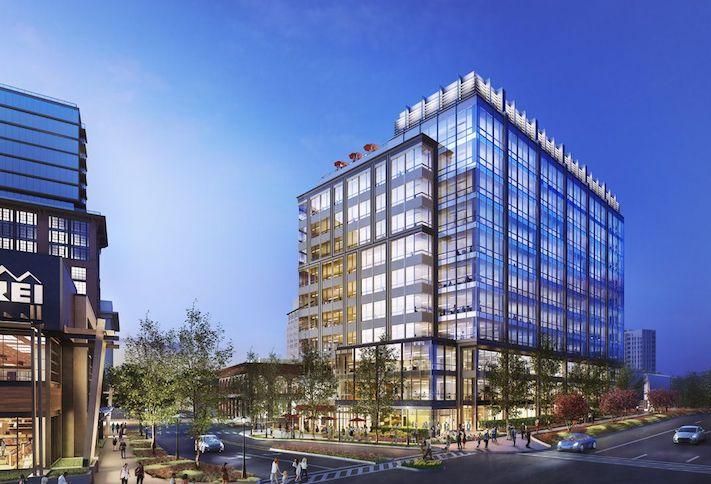 As Federal Realty seeks to attract tenants to its new spec office project in North Bethesda, the company aims to lead by example.

The retail REIT plans to move its headquarters to a 40K SF space in 909 Rose, an office building it is constructing at its Pike & Rose mixed-use development, Federal Realty CEO Don Wood tells Bisnow.

With the move, Federal Realty plans to vacate its office in the Congressional Plaza retail complex at 1626 East Jefferson St. in Rockville. Scheer Partners last week began marketing a 24K SF space in the building for lease, highlighting that it has been Federal Realty's headquarters for the last 25 years. A release from Scheer said the space would be ideal for a community-based healthcare provider, as health systems continue to shift operations away from hospitals.

The 204K SF office building at 909 Rose Ave. is expected to deliver in spring 2020. JLL is leasing the remaining space in the project on behalf of Federal Realty.

The Pike & Rose development has one existing 80K SF office building that is fully leased. It has three additional sites beyond 909 Rose that could each support 250K SF build-to-suit office projects, according to a JLL brochure.

Federal Realty also owns the Bethesda Row mixed-use complex. As the Downtown Bethesda area becomes more congested, Wood said he thinks companies will look for other places to locate in the county, such as Pike & Rose. He said that has proven itself out with retail users over the last few years, and he expects more office tenants will soon follow suit.

"This is a big county," Wood said during a podcast interview with Bisnow at Pike & Rose. "This is an affluent jurisdiction and it can certainly support more than just Bethesda, and so where would that be? Where's the logical place? To us, we're sitting in it."

In a letter to Montgomery County officials last year, Wood threatened to pull employees out of the county because of what he perceived as inadequate support from the local government for major developments like Pike & Rose. The company is establishing an office in Tysons as part of its expansion in Northern Virginia, but the headquarters planned at Pike & Rose appears to signal its continued commitment to Montgomery County.