Suicide Robot: What Really Happened During the D.C. Robot's First (And Last) Day On Patrol

It was the first day on the job for Steve the Robot, the new building security amenity at Georgetown's Washington Harbour development. The first such robot to be introduced in the D.C. region and the second on the East Coast, Steve became a viral sensation in a matter of hours for all the wrong reasons. 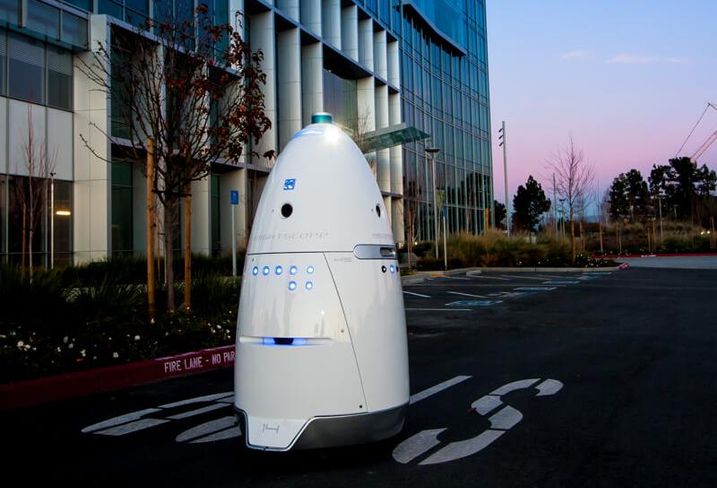 Around 2 p.m., the robot veered off its predetermined path and plunged into the fountain in the center of Washington Harbour. A crowd gathered quickly, and tweets joking about the robot committing suicide rapidly became trending on social media. Workers at the office and retail site created a memorial for Steve, placing flowers on the robot's charging site.

Our D.C. office building got a security robot. It drowned itself.

We were promised flying cars, instead we got suicidal robots. pic.twitter.com/rGLTAWZMjn

Did Steve, model No. 42 of the Knightscope K5 Autonomous Data Machine, have an existential crisis and choose to end his own life? His owner cannot be sure, but the incident is not deterring MRP Realty from implementing the robot and its counterparts at more properties it manages.

“We didn’t sense that he was unhappy beforehand,” MRP Realty Property Management Director Allison Johnson said. “We didn’t get any feedback from him that he didn’t like his job, so it seemed like an accident.”

The property manager and its security partner, Allied Universal, are still reviewing the tape to determine exactly what caused Steve to plunge into the fountain.

Allied has a business relationship with the robot's manufacturer, California-based Knightscope, which has rolled out the machine at several West Coast properties. Its first introduction to the East Coast came in May at Boston's Prudential Center. Allied discussed the idea with MRP, which jumped at the chance to be on the cutting edge of the building security innovation.

"Our feeling was, we don’t fully understand if it's going to be totally successful, but it's where the future is trending to, and we want to be part of that," Johnson said. "So we want to try it." 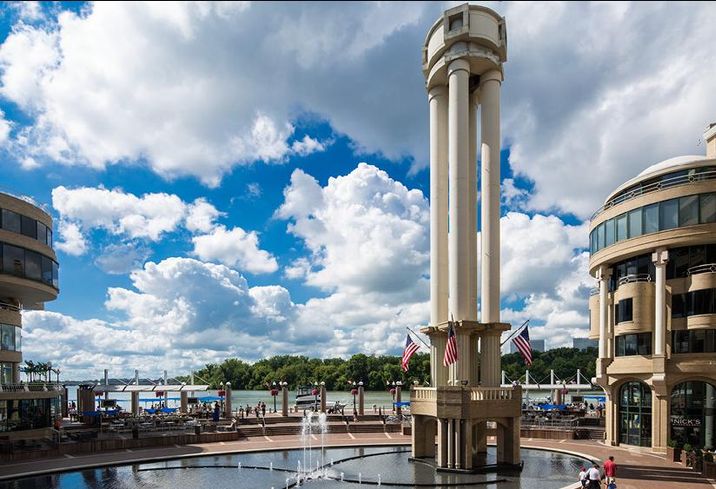 MRP manages more than two dozen properties in the D.C. area. It decided Washington Harbour would be the ideal property to test out the robot because it is a dynamic, public place and happens to be where MRP's headquarters and security command center is located. MRP sold the complex in 2014, but maintained management and leasing duties for the property and has a long-term lease for its office there.

Steve's story began early last week, when the robot was introduced to the property. Knightscope engineers chaperoned Steve around the complex to map out his route, and he sat at his charging station during his down time.

On Friday, MRP's property management and security personnel participated in a training session with the robot. Steve was programmed to travel a predetermined route around the complex, collecting video, images and data during his stroll. The technology includes 360-degree cameras, thermal imaging, human detection, license plate recognition, audio recording, two-way intercom and the ability to broadcast prerecorded audio. 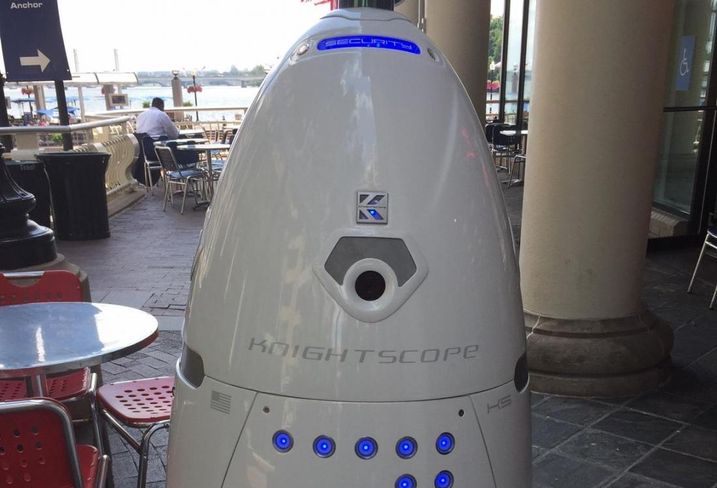 The robot's cameras and recorders are fed into the command center, where security officers can watch live video through the robot's eyes, and they receive alerts if he picks up on any inappropriate activity. The officers would then take it from there. Steve does not have handcuffs, a taser or a gun, so dystopian writers will have to wait before their robot-world-takeover stories come true.

Johnson said she was surprised at how much interest the officers showed during the training session, asking multiple questions each.

“There was a large-scale question about how can it effectively supplement our human team,” Johnson said. “This is a powerful tool. It’s got a lot of things it can do that are different from what a human can do, what it can see and perceive.”

Monday was Steve's first day without his assistants. He began around 8 a.m. MRP had notified its tenants, which include law firm Foley & Lardner and consulting firm GMMB, and Johnson said the reception was positive.

"Everyone was interested and came down to visit him and see him," Johnson said. "People took selfies, it had garnered buzz even before he was patrolling."

The first note of the incident came in at 2:19 p.m. Allied engineers and property management staff from MRP rushed down to the scene to pull the robot out of the fountain. Then the tweets started rolling in.

It's a fun day here at @gmmb. The super high-tech security robot at our office complex has had a mishap. pic.twitter.com/nhRshrJA9w

MRP then spoke with witnesses and all of the parties involved. It has since checked the outdoor security cameras and determined that there was no foul play. Nobody pushed Steve into the water, but something made him veer from the mapped-out route toward the fountain, tumbling down the stairs into the water.

"We don’t know exactly what happened," Johnson said. "Maybe it was a programming error, maybe weather played a role in it."

Knightscope believes Steve can make a comeback after some repairs, Johnson said, but the company has sent a replacement robot to take its place in the meantime.

The incident has not deterred MRP, and Johnson said the firm still hopes to introduce the robot at more properties after another three to six months. She believes the technology will continue to expand and become further integrated with building security in the future.

“We’re glad we’re working the bugs out,” Johnson said. “We’re happy to help go through the hiccups to get a streamlined program. It’s part of trying something new and taking the risk.”