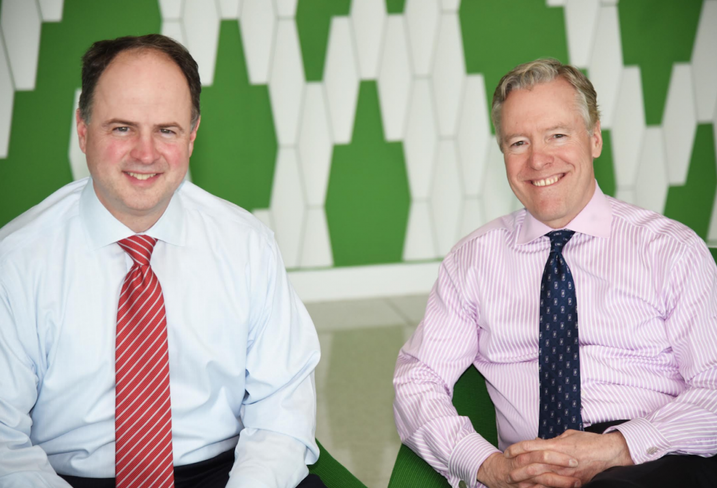 Transwestern executive managing directors Keith Foery (left) and Phil McCarthy (right) have been business partners and best friends for nearly 30 years, and together they have co-led the Mid-Atlantic region office since 2014.

Many are curious to discover the secret to their relationship’s longevity, as it has proven integral to the duo’s success and is rare among those in CRE.

While many executives would shy away from the term “co-leader,” Phil and Keith openly embrace it, and wouldn’t have it any other way.

“We are two minds and one heart,” Phil says. “People accidentally call me Keith all the time, but I consider it a compliment.”

While the two are fiercely passionate about Transwestern and its nearly 350 Mid-Atlantic employees, they never envisioned themselves climbing to their current leadership positions when they began their careers in 1987 as struggling young brokers at CBRE.

Keith had just finished a four-year stint as a surface warfare officer in the Navy, and Phil had just left his first job at a small, regional brokerage firm. They had been working together as junior brokers for a year before deciding to form their partnership.

“When we started, we were both broke, and fairly certain we’d go up in a ball of flames,” Keith says, laughing. “But we knew we’d make good partners because we share the same values.” 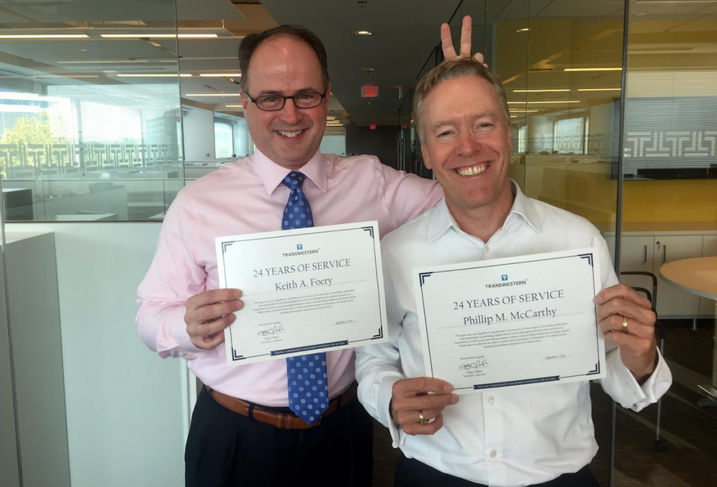 Beyond this, they credit their partnership’s remarkable endurance to several key mentors, who helped instill this set of values in the pair, among them Roger Herst and Carl Pfeiffer, under whom they worked at CBRE.

They also credit Boston Properties senior EVP Ray Ritchey, a client-turned-mentor and a Washington commercial real estate icon known for his generosity, and Carey Winston Co (now Transwestern) co-chairman Brendan McCarthy, another well-known figure in the local industry who passed away in 1997.

“Our mentors taught us that being generous and helping others is the key to succeeding in this industry,” Phil says. “You will be most successful when you lift up those around you.”

Phil acknowledges that it sounds a little cliché, but he firmly believes in the accuracy of the golden rule. Keith warns that egos and money can often impede or dissolve a good partnership. Instead of keeping score deal by deal, Phil and Keith chose to evaluate their partnership based on long-term goals.

When they look back at what they’ve accomplished, it’s evident they carry each other. Phil and Keith recount times when one brought in money while the other didn't, instead sowing the seeds for future success.

After 27 years of partnership and negotiating billions of dollars of transactions, in 2014, the two tackled the biggest challenge of their careers: taking on the role of co-leaders of Transwestern’s Mid-Atlantic region. While assuming the additional responsibility has certainly been a challenge, it has also provided some key advantages.

“We can serve our clients better by seeing how changes in other submarkets are going to affect Montgomery County,” Keith says. “We’re also constantly seeking new perspectives from other business lines, which force us to sharpen our problem-solving skills.”

“One of the simplest but most important questions we ask ourselves to make decisions," Phil says, "is, ‘What’s the ethical thing to do?’”

“We know, without a doubt that if we focus on doing the right thing for our employees and our clients every day, we will be successful, and we really want to see our team succeed because these aren’t just 350 employees; they represent 350 families.”

Phil is known for becoming emotional not only when he speaks about employees, but also when the subject turns to his business partner. He and Keith got married the same year. They live in the same neighborhood. Their kids have grown up together. Their families go on vacation together.

“Keith is the best business partner and friend I could ever imagine,” Phil says. “We are blessed beyond measure to work together, and we’re really just getting started. I can’t wait to see what we accomplish in the next 10 or 15 years."