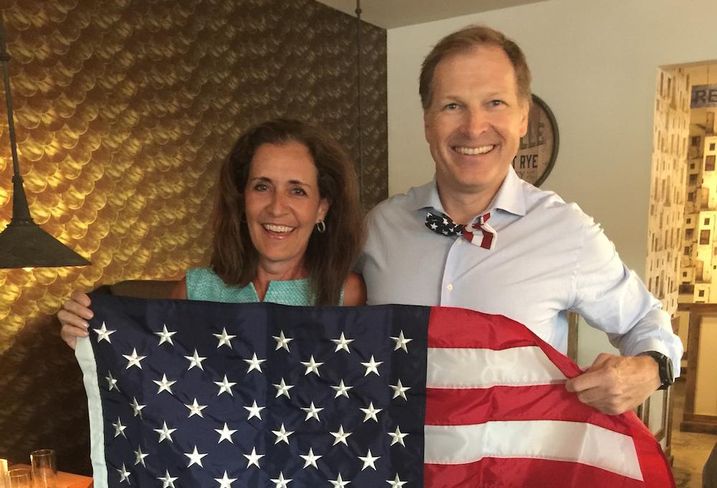 Cushman & Wakefield executive managing director Tim Summers moved to the US after graduating from college in London 22 years ago, but he decided 2016 was the year for him to get his full citizenship.

"I had been on a green card for all that time," Tim tells Bisnow. "About this time last year I thought, with the election coming up, it might be a good opportunity to vote for the first time."

Tim's first US home was in Atlanta, where he worked for real estate company Bullock, Terrell & Mannelly for five years and met his wife. The couple had two kids, who are now in college, and moved to the DC area in 2000. In 2003, Tim began working for Trammell Crow, which would later merge into Cushman & Wakefield. He works in Tysons representing office landlords.

Above Tim celebrates with friend and client Ann Planning, who gifted him the flag, which has flown over the Capitol, on behalf of Rep. Patrick McHenry (R-NC).

Tim says the citizenship process was not too complicated for him, since he had lived in the US for two decades, but he says for newer immigrants who don't speak English it can be more challenging.

"You quickly realize these people are here to chase the American dream, the same as me, but if they don’t get citizenship, they're likely getting sent home," Tim says. "All of a sudden, you realize it is a big deal. I feel really privileged to be an American."

Tim was sworn in alongside 120 others from 57 different countries at the DC District Court two weeks ago. After the ceremony, he went out for hot dogs with his wife, children and mother-in-law, and then he registered to vote.