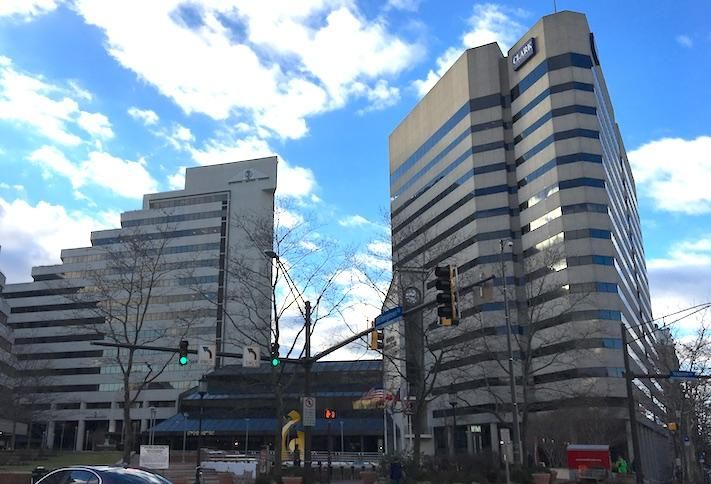 One of the most recognizable buildings in Downtown Bethesda's skyline has traded hands.

Stonebridge and Rockwood Capital announced Tuesday they acquired the Clark Building at 7500 Old Georgetown Road from Clark Enterprises for an undisclosed price. The 300K SF building was last assessed at $75.5M, according to property records.

JLL's capital markets team of Jim Meisel, Steven Conley, Matt Nicholson, Dave Baker and Andrew Weir brokered the deal on behalf of the seller. The buyer is bringing on Transwestern's Phil McCarthy and Keith Foery to manage the building's leasing.

The building is roughly 90% leased, Stonebridge's Doug Firstenberg tells Bisnow. Clark Construction, a separate entity from Clark Enterprises, occupies about one-third of the building as its headquarters. Clark Enterprises also occupies one floor, and Morgan Stanley and Proquest each occupy at least one floor.

Firstenberg said some leases will expire in the next three to four years, and his team plans to launch a significant repositioning effort. He said the new ownership team plans to change the exterior look of the building, add amenities and upgrade the building's lobby.

"We know Bethesda well and this is an iconic building that is really ripe for repositioning as tenants roll over," Firstenberg said. "We got really comfortable with the plan and what we can do, and it's a great opportunity to add to our Bethesda portfolio."

Stonebridge is also developing a new trophy office building in Downtown Bethesda at the corner of Wisconsin and Montogmery avenues. Firstenberg said the repositioning strategy for the Clark Building aims to position it as a value play for tenants not looking to pay trophy rents.

"We think there's a real opportunity in Bethesda, the gap between the new trophy buildings and the office stock in Bethesda that is really old," Firstenberg said. "A market like Bethesda is going to have tenants willing to pay for trophy buildings, but we also think tenants are going to want to spend a little bit less, but get everything they need for their employees."