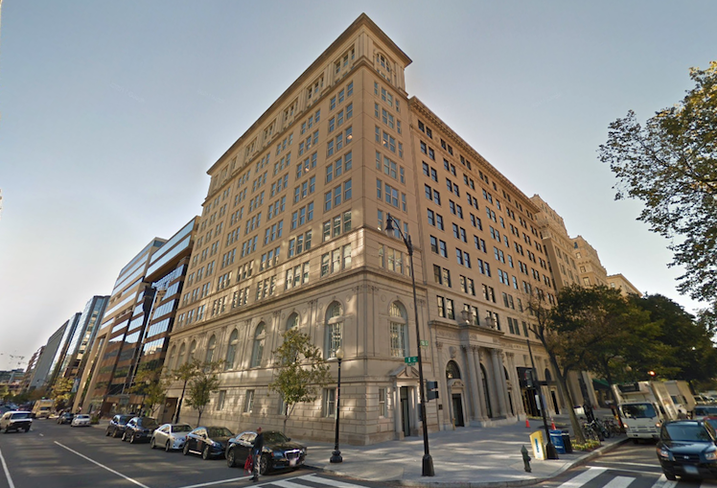 JPMorgan Chase has just acquired a Downtown D.C. office building to serve as its regional headquarters as it charts a major Washington-area expansion.

The 231K SF Class-A office building is currently about 86% occupied, but law firm Paul Hastings plans to vacate its 126K SF space in the building in 2020 when it moves to Tishman Speyer's 2050 M St. NW.

JPMorgan plans to begin renovating the property in 2019 and open its regional headquarters there in 2021. It did not say how many square feet the headquarters will occupy. The bank also has offices in Tysons and Bethesda. The opening of a regional headquarters comes as JPMorgan is launching a major D.C.-area expansion, with plans to open up to 70 new branches and hire up to 700 new employees.

“This new regional headquarters and branch expansion in Greater Washington will help us continue to invest here long term and play our part in continuing to grow the economy of this great region," JPMorgan Chase mid-Atlantic Chairman Peter Scher said in a release.

The building, on the same block as the McPherson Square Metro station, was owned by Vornado before the REIT merged its D.C. branch with The JBG Cos. to form JBG Smith. Tuesday's deal, first reported by GlobeSt. ahead of the announcement, comes 13 years after Vornado acquired it for $119M.

JBG Smith CEO Matt Kelly in March unveiled a plan to generate $700M of capital through acquisitions and recapitalizations, saying he sees D.C. as a seller's market. The REIT last month sold two Reston office buildings to Brookfield Property Partners for $95M. In February, JBG Smith sold a minority stake in its Dupont Circle development to a Canadian pension fund for $100M.

“We continue to execute our strategic recycling program with the sale of the Bowen Building to JPMorgan Chase, who plans to own and occupy the property," Kelly said in the release. "Year to date, we have executed over $335 million of asset sales and recapitalizations, and we will continue to pursue opportunities to capitalize on the attractive market environment that exists today.”