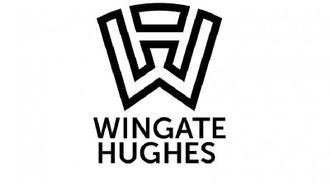 
Ford's logo combined with the Lincoln logo, adjacent to the waiting area alcove.

The Ford Motor Co. has a new home for its government affairs office.

801 Pennsylvania Ave. makes up half of Market Square, a destination for world-class shopping and office space in Downtown DC. Ford occupies 18k SF of prime space in the building, which it has designed from the bottom up. To acquire the office, Ford relied on the talents of CBRE’s Lou Christopher and Matt Garcell, as well as JLL’s Even Behr and Doug Mueller. To transform it into a modern — and distinctly Ford — office, the company turned to boutique architecture firm Wingate Hughes Architects.

Founded by Gavin Wingate Bowie and Gavin Hughes Daniels, Wingate Hughes specializes in custom, relationship-driven design strategies. The architectural firm and its staff have built a reputation as trusted collaborators with clients, turning candid conversations into detailed plans. It is what got the firm in the door with Ford. “Wingate Hughes has a great relationship with the landlord, Columbia Properties, and the landlord’s project manager, Transwestern’s Todd Spear,” Bowie said. “They approached Wingate Hughes based on our reputation for the design product that Ford was looking for and the ability to get it done on an expedited schedule.” Working with Spear in November, Wingate Hughes devised a plan that would hit Ford’s ambitious July 1 move-in target; it had eight months.

Ford needed a space that reflected its 113-year-old history in the American automobile industry. “They made a point of wanting to express their history, their innovation and their community within the space,” Bowie said. “We had conversations with the government affairs office about how they wanted to use the space and how they wanted to integrate the brand.” The brand is immediately on display at the office's entrance on a custom feature wall showcasing both Ford Motor Co. and Lincoln Motor Co. A lacquered aluminum Ford logo floats above a satin-finished, interlocked Lincoln mesh grid.


Ford's office has a radial ceiling that stretches 360 degrees across the floating conference room and event space, expanding and brightening the area.

Ford gave Wingate Hughes freedom to be bold in its design choices and it paid off. “We hear over and over again, ‘I’ve never seen a representation of the Ford and Lincoln logo together that way and done so well,’” Bowie said. “I think we hit the mark.”

Next to the feature wall, Wingate Hughes eliminated traditional waiting area furniture in favor of a throwback to Ford’s 1950s-era automobiles, outfitting the custom alcove bench with veneer paneling and leather seating.

For Matt Garcell, who was with CBRE at the time of the project before transitioning to managing director at Cushman & Wakefield, the success of the branding design represents one small piece of a successful collaboration. “This project was special because it was a true partnership between all parties involved," he said. "Ford’s space sets a new bar for government affairs offices in DC."


The black-framed glass storefront system evokes the industrial roots of the automotive industry, while letting in sunlight.

While objects evoking the company’s history fill the office, it is not meant to be a museum. “We agreed that the goal was not to represent the history of Ford, so much as its future potential,” Bowie said. In the public areas of the office, Wingate Hughes constructed multi-use “Innovation Zones,” which display several interactive multimedia walls that showcase both artifacts and the projects the company has in development. Stretching 360 degrees above a floating conference room with views of Pennsylvania Avenue — and the Capitol— a modern radial ceiling connects and enlarges the reception, conference and events area. Wingate Hughes worked with the flow of the building, incorporating a curved layout that complements Market Square’s circular shape.

The Wingate Hughes team also tackled functional challenges throughout the process. “Our design had a lot to do with light and air; it had a lot to do with the issues of access to daylight,” Bowie said. “The chief obstacle to overcome was acoustic privacy.” The bronze-framed storefront glass system for the private offices evokes the industrial roots of the automotive industry while expanding the breadth of the private and open office spaces.

The new government affairs office represents the best of Ford’s heritage and future ambition. “Wingate Hughes delivered on the vision," said Ziad Ojakli, group vice president of government and community relations at Ford Motor Co. "It was important that our space reflected both our past and our future. From the location overlooking the National Archives to the sleek design, Wingate Hughes showcases Ford's role in American history and nods to the exciting work ahead of us.”

It also stands as an example of how collaboration is crucial for functional and innovative design. “The Ford government affairs folks just made the job fun,” Bowie said. “They were great clients to work with.”