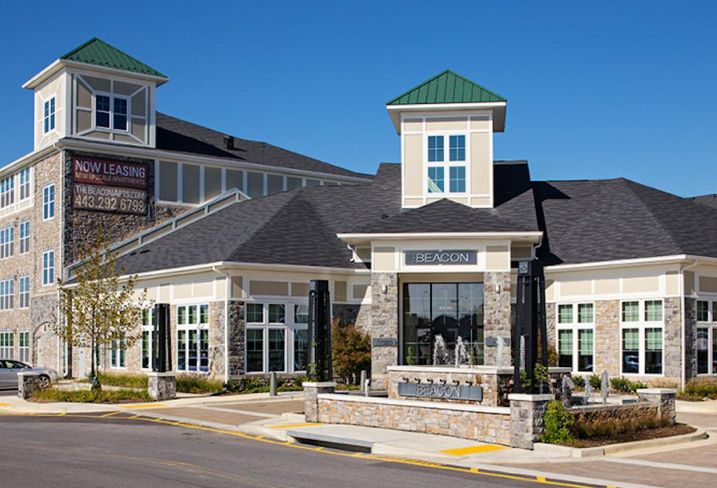 
The Beacon at Waugh Chapel apartments in Gambrills, Md.

The Bozzuto Group, which built the multifamily property in 2013 with Pritzker Realty Group, sold the asset to the JV for an undisclosed price.

The property, called The Beacon at Waugh Chapel, is in Gambrills, just off Route 3 and about 10 miles from Fort Meade. It sits within walking distance of a major retail center anchored by a Wegmans, Target, Dick's Sporting Goods and Regal Cinemas. PRP president Paul Dougherty said the combination of the National Security Agency as a nearby employment center and the walkable amenity base drew him to this asset.

The apartment complex consists of two four-story buildings with one-, two- and three-bedroom units. It includes a swimming pool and grills, a 6,500 SF clubhouse and a fitness center.

To acquire the property, PRP partnered with AXA REIM US, a subsidiary of French-based AXA Investment Managers. Dougherty said he has known AXA's North American head, Steve McCarthy, for 20 years and has been looking to do a deal with the firm. He said he expects the firms to partner on more deals in the future.

PRP made a similar acquisition in October 2015 when it bought a 335-unit Laurel apartment complex, in partnership with Ares Management, from Invesco Real Estate for $79M.

“We made the same play for that property as we are for this property, which is a very nice asset," Dougherty said. "We’re keying off the employment story at NSA.”