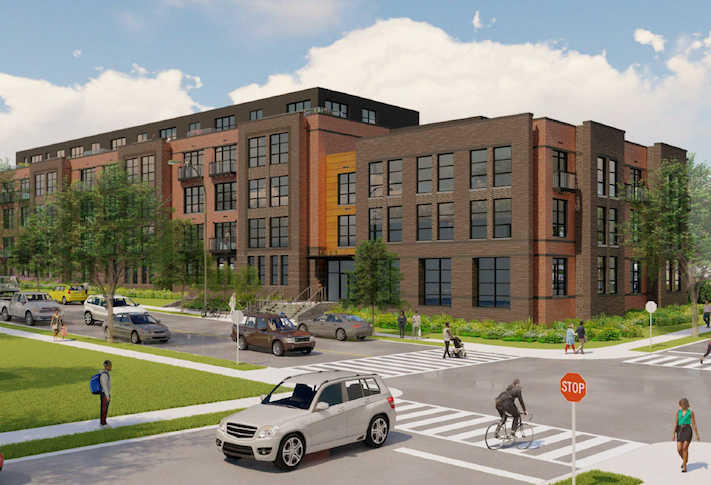 MidCity's plans for an apartment building next to its massive RIA project are moving forward.

The developer last week received Board of Zoning Adjustments approval for its 108-unit project at 1400 Montana Ave. NE. MidCity also announced it has finalized its opportunity zone fund for the $33M project, including $14M in equity.

The project will be built on the site of the Historic Berean Baptist Church, housed in a one-story former bank building at the corner of Montana and Rhode Island avenues. MidCity bought the site in July for $5.85M.

The 108-unit apartment building will include 11 affordable units reserved for those making up to 60% of the area median income. It will feature amenities such as a rooftop terrace, a fitness center, a den and workspaces. MidCity expects to complete the project in the summer of 2021.

The site is across the street from the Brookland Manor housing community, which MidCity plans to redevelop into a 1,760-unit mixed-use project. The project, RIA, will also utilize an opportunity zone fund as a portion of its capital stack, MidCity said.

"The opportunity zone designation allows MidCity to drive substantial capital in an economically distressed area, spurring economic development and job creation, and creating new housing and affordable units where there are none presently," MidCity Executive Vice President of Social Impact Stephanie Liotta-Atkinson said in a release.