The section of Southwest D.C. just south of the National Mall is largely home to office buildings, museums and hotels, but residents will soon be able to live in a new 14-story apartment building overlooking the District's monumental core. 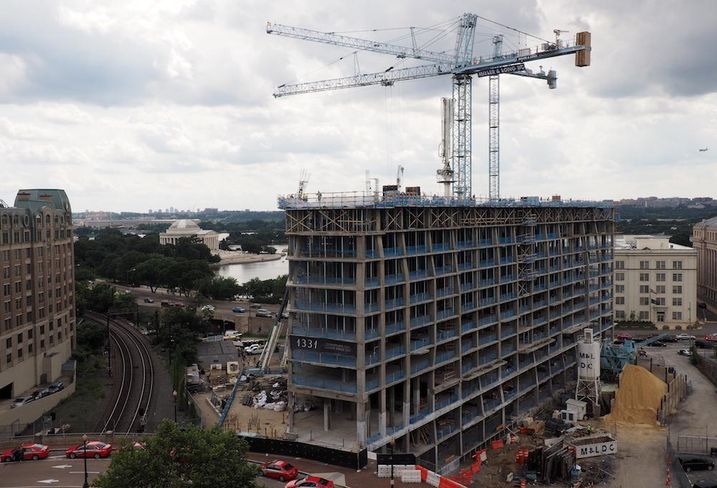 Republic Properties broke ground in June 2017 on a $220M, 373-unit apartment project at 1331 Maryland Ave. SW. The developer received $170M in construction financing from CapitalSource and Parse Capital. The building, part of The Portals complex, will be branded as 1331 and will begin leasing next spring.

Designed by Robert A.M. Stern Architects with WDG Architecture serving as the architect of record and Balfour Beatty as the general contractor, the 14-story apartment building is currently under construction. Twelve of its floors have been built and it will top out in the next month. Bisnow took an exclusive tour of the project, and climbed to the top of the 225-foot-tall construction crane to capture the views of the surrounding area. 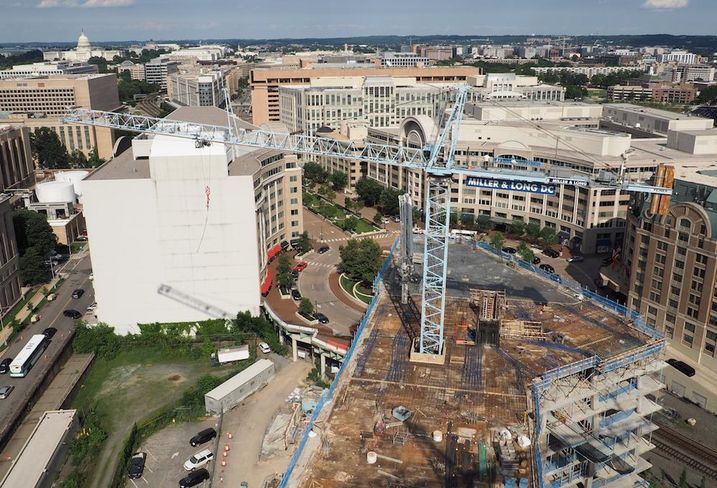 Bisnow: Jon Banister
The view from the crane above Republic Properties' 1331 apartment project

The Portals Complex, which Republic began building in the early 1990s, features three office buildings and the luxury Mandarin Oriental hotel. When it originally began the project, apartments were not part of the plan, Republic Properties President Steve Grigg said.

"There really wasn't a market at the time for residential being located down there, it was viewed as a location for office and hotel," Grigg said. "But it has morphed over a period of time as Washington has become a major residential market." 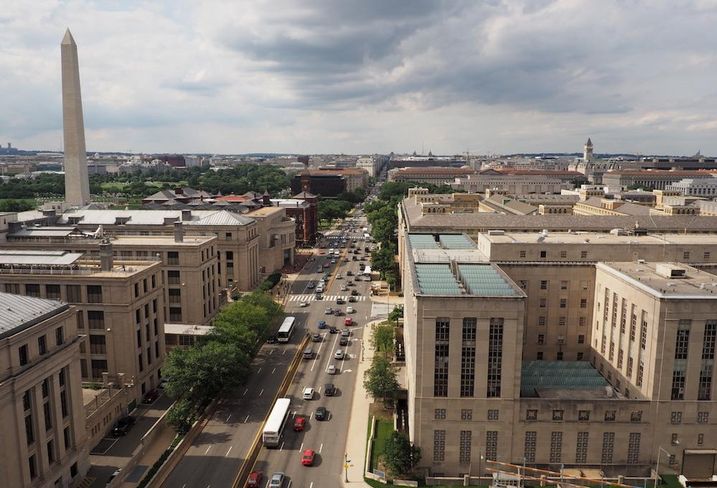 The project sits two blocks south of the the National Mall, four blocks west of the L'Enfant Plaza Metro station and about a half-mile from The Wharf, the new waterfront development that opened in October. The location gives it views of The Capitol, the Washington Monument, Reagan National Airport, The Pentagon, the Northern Virginia skyline and elsewhere in the region.

To take advantage of those views, Republic is creating a 14th-floor rooftop with walking path around the perimeter, an infinity pool, two clubrooms, fire pits, grilling stations and a lounge. The top four floors of residences will have private elevator access and feature larger units than the rest of the building, averaging nearly 1,400 SF and reaching as high as a 3,400 SF three-bedroom with a den. About half of the building's units will be studios and one-bedrooms, mostly on the lower floors.

"We saw an opportunity to do some really special units on the top of the building," Grigg said. "We don't think there's enough of a market in D.C. for large units with views. It certainly hasn't been satisfied by any of the competition." 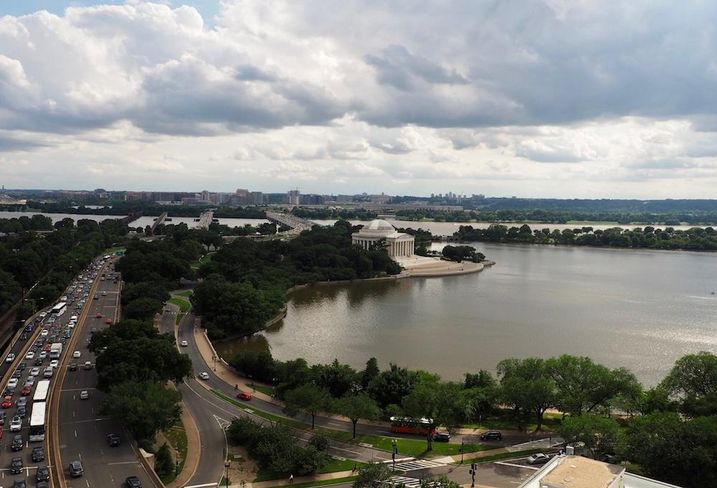 Grigg said he expects a variety of different types of renters will sign on once the building begins leasing next spring. But given the building's location, quality and views, he thinks it will have a particular appeal to empty nesters, diplomats, senior government officials and corporate executives.

The building had originally been planned to be 15 stories with a mix of rental and condo units. The Commission of Fine Arts forced the developer to reduce the height, and the decision to go fully rental was based on market conditions.

"We felt like there was more than enough of a rental market," Grigg said. "I think from a long-term value standpoint, having ownership of rental property, not a one-and-done thing like condos, felt like it would provide more longer-term value." 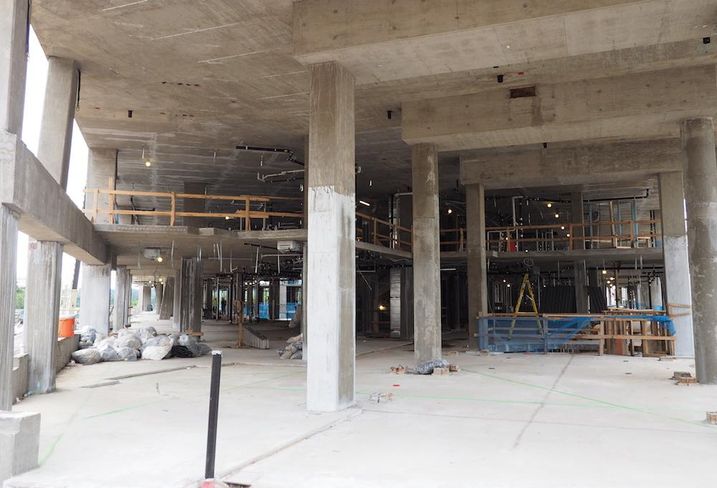 Given the slope of the land, the building's main entrance will be on the third level facing the Maryland Avenue circle, and it will have a second entrance on the southern side of the building on the first level.

Inside the main entrance will be a large, two-story lobby with private seating areas and a winding staircase leading down to its 4K SF fitness center. The building will also feature a dog spa, a pet walking area, resident storage rooms and a library and study area. 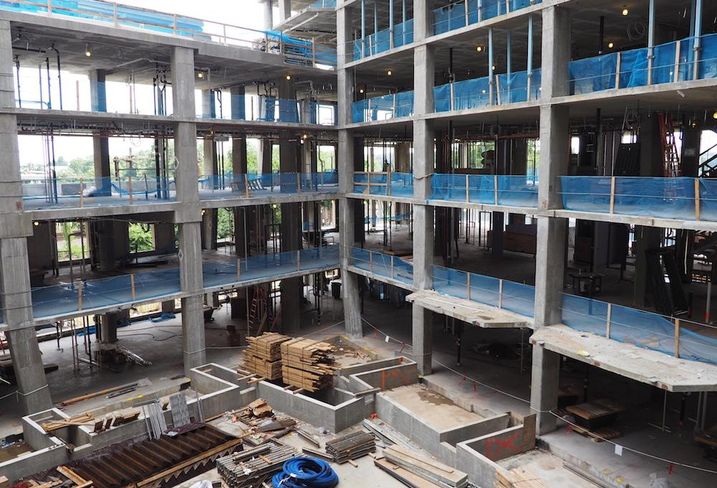 The interior triangle of the project will feature a large landscaped area with private outdoor terraces on the first floor and balconies on many of the upper floors. The south side of the building will only have four levels of units, increasing the number of apartments with views over the Tidal Basin, and the roof above that fourth level will have a landscaped garden with private terraces for the adjacent fifth floor units.

The building's exterior architecture pays homage to the monuments and federal buildings nearby with limestone-colored masonry facades. It will have a variety of window patterns and balconies. 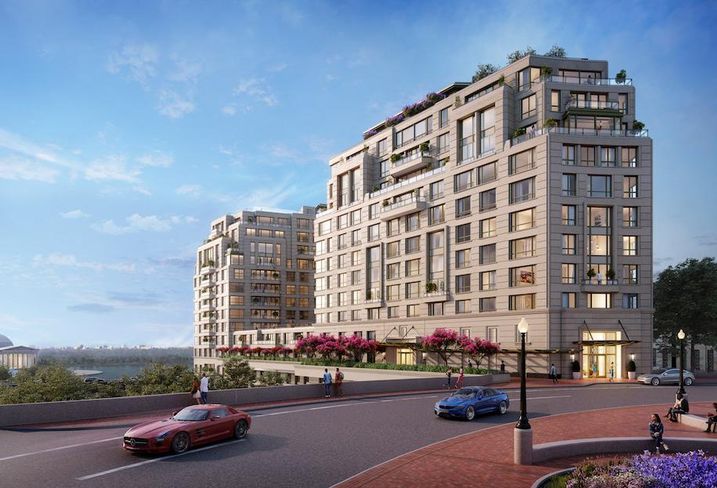 Given its prominent location, the building will be one of the first visible to drivers crossing the 14th Street bridge into the nation's capital. Grigg said he wanted to create a visibly appealing building that would last for generations.

"We're going to see Washington evolve and mature over the next 40 years, and this building is going to last for 100 years," Grigg said. "We wanted to take the reality of this location and to see what kind of building would fit into the urban fabric as it evolves over the next century."