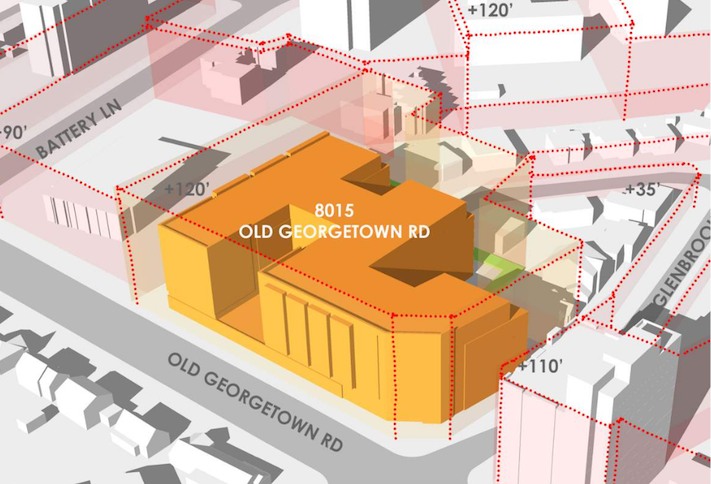 A long-planned effort to build condos alongside a Bethesda church has been scrapped. Instead, the site is being tapped for a project nearly three times bigger.

JLB Partners has filed plans with the Bethesda Downtown Advisory Panel to build a multifamily project of up to 310 units on the site of the Christ Lutheran Church at 8015 Old Georgetown Road.

The 2-acre site, about a half-mile from the Bethesda Metro station, is currently home to the church and an adjacent three-story community building. The church in 2007 began seeking to build on the site, and in 2016 it received approval to build a new church building and a 107-unit condo building.

The new plan calls for an 85-foot-tall building, shorter than the originally planned 94-foot-tall project and well below the 120 feet the zoning allows. It would include up to 310 multifamily units, with 15% of them set aside as moderately priced dwelling units, plus 274 parking spaces, a rooftop terrace, an outdoor pool and a courtyard. JLB is working with SK+I Architecture on the project.

Dallas-based JLB maintains its D.C. Metro-area office in Bethesda. It has completed residential developments in Beltsville, Herndon, Tysons and Rockville. A hearing is scheduled May 22 for the developer's proposal.