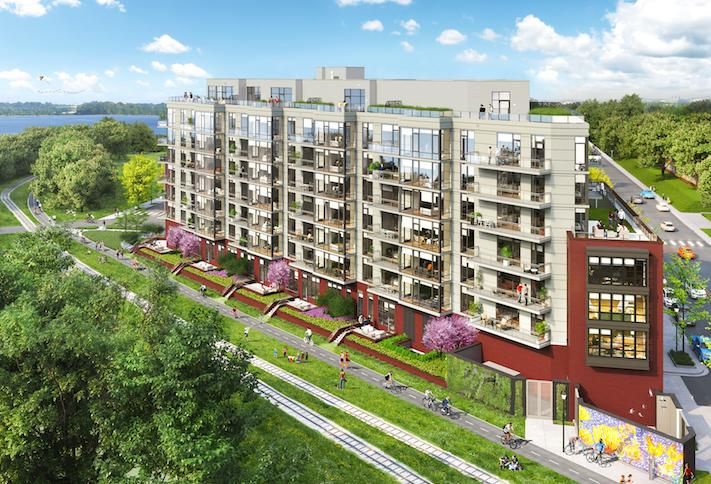 Courtesy of Carr Cos.
A rendering of the Muse condo project at 1201 North Royal St. in Alexandria.

Carr Cos. announced Tuesday it broke ground on Muse, a 73-unit luxury condo building at 1201 North Royal St. in Old Town North. It expects to deliver the project in late 2021.

The project is being built on the site of the former MetroStage theater, one block from the waterfront park and about a mile north of the King Street retail corridor. Carr is relocating MetroStage to another one of its buildings, at 901 North Fairfax St.

The development, designed by SK+I Architecture, consists of two buildings connected by an enclosed bridge above the project's Arts Walk. The smaller building will be largely occupied by The Art League, a nonprofit cultural organization headquartered in Old Town.

The project's amenities include a penthouse lounge with an outdoor terrace, an indoor-outdoor fitness center with a yoga room, a library and a lobby lounge. The condos in the Muse building will range from 920 SF to 2,800 SF and will start at $800K.

Alexandria experienced a 27.5% year-over-year increase in housing prices in June, the largest increase in the region, according to Bright MLS data reported by UrbanTurf.

Several of the area's other suburban jurisdictions also experienced strong growth. Prices rose by 16.7% in Arlington, 9.8% in Prince George's County, 5.7% in Falls Church and 4.4% in Fairfax County, according to the Bright MLS data. Housing prices in the District remained flat.