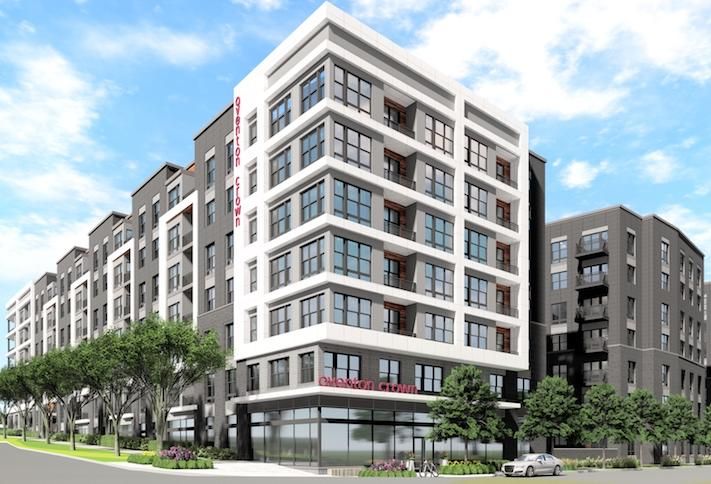 Courtesy of Aventon Cos.
A rendering of the 386-unit Aventon Crown building in Gaithersburg.

The next phase of multifamily development at Gaithersburg's 182-acre Crown development is moving forward.

Aventon Cos. announced Wednesday it broke ground on the 386-unit Aventon Crown building in the Crown Central portion of the development. The developer is partnering with Sumitomo Corporation of America on the $100M project, expected to deliver in fall 2021.

The seven-story building, designed by SK+I Architecture, will offer units ranging from studios to three-bedrooms that include smart home technology. Its 15K SF of amenity space will include a coworking lounge, a podcast studio, a fitness and yoga studio, a private events space, a pet spa and a bike storage area. It will also have an outdoor pool, a kitchen and a fire pit area.

As part of the Central Crown area, the project will sit to the east of Downtown Crown, which features over 250K SF of retail anchored by a Harris Teeter grocery store. Much of the western portion of the development has been built out, and construction is now shifting east with Aventon's project and a 64-unit condo project from Pulte.

The Crown development sits along the I-270 corridor, a hub for life sciences and biotech companies. It would have featured a stop on the planned Corridor Cities Transitway bus rapid transit line, but the Maryland Department of Transportation cut the funding for that project last year.

Aventon — founded in 2018 by former Bainbridge Cos. executives — is leading development while its equity partner on the project is Japanese firm Sumitomo's U.S. division. Aventon Senior Managing Director Mark Coletta said Crown offers a free shuttle to the Shady Grove Metro, providing a transit option, and the developer was drawn to the major employers along I-270.

"We chose this location for its tremendous employment growth, great schools, transportation access and excellent quality of life," Coletta said in a release. "It is perfectly placed near major employers such as Glaxo Smith Kline, Medimmune, Shady Grove Hospital, the National Cancer Institute, NIST and numerous other science, software and federal government agencies."