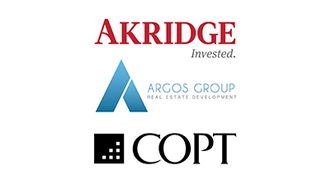 In D.C., A New Trophy Building Offers Luxury Office Space While Catering To The Community

After a decade of planning, construction and anticipation, a trophy office building in the heart of downtown D.C. is finally ready to welcome tenants into its amenity-filled spaces.

2100 L is a 10-story, 190K SF trophy building with a grand two-story lobby, 20K SF floor plates, 8K SF of retail space, floor-to-ceiling glass windows with unparalleled views of the D.C. skyline, and little touches everywhere that celebrate the culture, artistry and history of the neighborhood.

Along with its spacious office layouts and high ceilings, the building offers a rooftop lounge with an adjacent catering kitchen, a rooftop terrace, a spa-quality fitness center, a penthouse conference center and ample parking. There is also an art gallery and a small park that offers unique spaces to meet clients and hold meetings.

The building’s north-facing facade features an installation from artist Jan Hendrix. Partnering with Zahner, a company that creates images through laser-cut metal panels, Hendrix designed a pattern similar to the cell structure of the trees you can find throughout D.C. The facade reflects light, creating a shimmering effect outside and inside the building.

Courtesy of Alan Schindler Photography
The lobby of 2100 L

The building received LEED Platinum certification in October, which was a goal for the 2100 L team from the very beginning. The building’s sustainable features include a direct outdoor air HVAC system, which helps boost indoor air quality and create a safer, more efficient environment for tenants, which is particularly important with air quality at the top of everyone’s mind.

Akridge, Corporate Office Properties Trust and the Argos Group, the team behind 2100 L — along with executive architect WDG Architecture and design architect OTJ Architects — each said that when they embarked on this project they knew they wanted to create something that wouldn’t just benefit the retail and office tenants that would call the building home but the community as a whole.

Now, thanks to their efforts, the community not only has a luxurious new office building to attract more companies to the area, but a local historical school has a new facade as well.

More than a decade ago, Akridge, COPT and the Argos Group settled on the Thaddeus Stevens campus as the perfect spot for 2100 L. The city agreed, as long as the development team agreed to two points: the school, which was one of the first public schools in D.C. for Black students, was to remain a school, and its historic facade needed a renovation.

The team was happy to agree, and it turned out that when it came to finding ways to make a positive impact on the community, the facade renovation was just the beginning.

Courtesy of Alan Schindler Photography
The landscaped terrace at 2100 L

”The Thaddeus Stevens School is an incredibly important landmark for the community, and we wanted to make sure to respect and celebrate that,” Akridge Senior Vice President of Development David Toney said. “Quickly, though, what started out as a collaboration between the 2100 L team and city officials turned into a broader collaboration with the community as a whole.”

Beyond the school renovation, the team behind 2100 L has worked with local community groups to devise ways to benefit residents through art and education.

The team has endowed a scholarship program for D.C. public and charter school children, a program to teach children about real estate development and construction. There is also a commemorative art piece in the “pocket park” between the school and 2100 L that honors Thaddeus Stevens, an augmented reality exhibit in the office lobby that highlights the history of the school and an art gallery on the building’s ground floor featuring works by Black artists.

“We didn’t want this to be just a run-of-the-mill real estate transaction,” Toney said. “We connected with community leaders to establish initiatives that could really make a difference.”

Courtesy of Alan Schindler Photography
The Veil at 2100 L

The western end of the Golden Triangle Business Innovation District, where 2100 L Street is located, has always been the heart of D.C.’s office market, with 43 blocks of arts, culture and entertainment venues alongside restaurants and shops to support the city’s employees. The new office building is steps from four Metro stations and just 15 minutes from Ronald Reagan Washington National Airport.

“The office market may be facing a challenge right now, but there will always be a market for quality, sustainable office space in the D.C. central business district," Toney said. "That’s what we’ve created with 2100 L.”

This feature was produced in collaboration between the Bisnow Branded Content Studio and Akridge and COPT. Bisnow news staff was not involved in the production of this content.

Akridge and COPT
Akridge is a vertically-integrated commercial real estate firm. Akridge created its platform to address every aspect of the property business from start to finish – including acquisitions and capital markets, development, design and construction management, leasing, property management, technology services, and finance and asset management. Because it is involved in each phase of a building’s life-cycle, Akridge has a comprehensive view of the asset. Corporate Office Properties Trust, or COPT, is a real estate investment trust that owns, manages, leases, develops, and selectively acquires office and data center properties. An S&P MidCap 400 Company, COPT shares are listed on the New York Stock Exchange under the symbol OFC. The majority of COPT's portfolio is in locations that support U.S. Government agencies and their contractors. COPT also owns a portfolio of office properties located in select urban/urban-like submarkets within our regional footprint.
Confirmed! You are subscribed to the Bisnow Washington, D.C. E-Newsletter.
Most Read Stories
More Top Stories
Bisnow D.C. Newsletter
Bisnow D.C. Newsletter