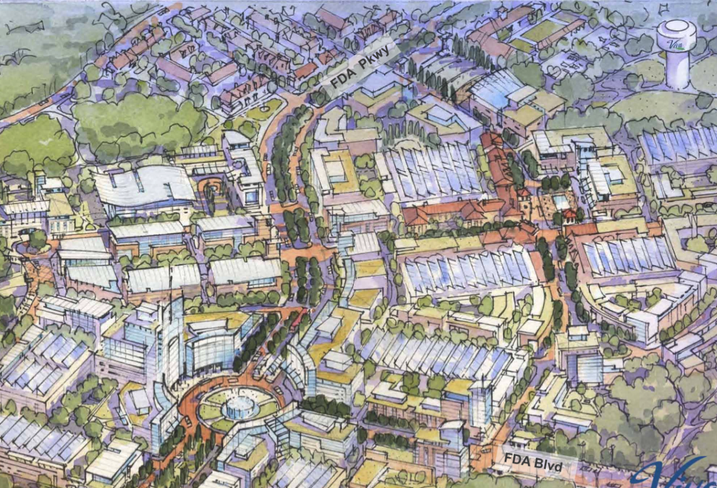 A plan to build 12M SF of mixed-use development on a 300-acre site near the Food and Drug Administration's HQ in Montgomery County has been in the works for nearly a decade, and the developer feels confident it can break ground in a matter of months.

Percontee submitted its sketch plan for the $3B Viva White Oak project in July and the conceptual design will go in front of the Montgomery County Planning Board on Nov. 30.

The developer is currently designing the more detailed application for the 2M SF first phase and expects to submit that early next year, as long as the sketch plan is approved, Percontee Executive Vice President Jonathan Genn told Bisnow. He does not expect that stage to take long because of how much public input has already been given through the entitlement process. He said he hopes, and has the financing in place, to break ground on Phase 1 by May.

Montgomery County first released the request for proposals for the county-owned portion of the site in 2008, and, due to delays, it did not select Percontee as the developer until 2011. The project was delayed further by issues with the county, but the public-private partnership reached an agreement in June 2016 allowing the development to move forward. After navigating this difficult process, Genn said it will be a relief to finally get to the groundbreaking.

"I will have a lot more gray and white hair when we put the shovel in the ground than when we were moving forward with the earlier plans," Genn said. "People may ask if that's the same person." 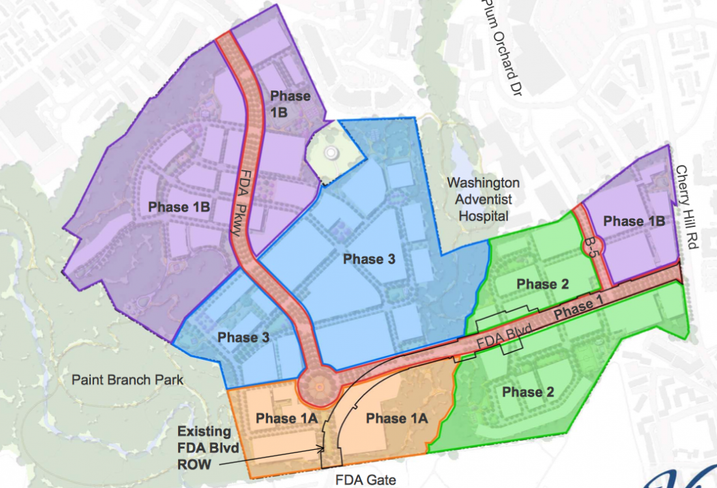 Viva White Oak's first phase would construct three major roads to create the site's transportation network and would include buildings on the west side of the site, closest to the FDA campus, and on the northeast corner.

Genn said the first phase would include a mix of office, residential and retail but could not yet say exactly how much of each component. He said the transformational nature of the project makes it difficult to predict where the market will be for each phase.

The overall plan calls for 12M SF of development. Half of the square footage would be residential, including about 5,000 units, with the other half commercial space, including office, retail and research and academic buildings.

The sketch plan splits the 300-acre site into four neighborhoods. The southwestern portion would be the office and research and development core and include academic buildings. The development is envisioned as a biotechnology and biomedical hub, given its proximity to the FDA and the Washington Adventist Hospital.

The neighborhoods on the west and east sides would be largely residential, with some retail, and the center portion would be the "village center" with the shops, restaurants and entertainment amenities.

Once Percontee breaks ground, it could be at least 10 years before the development is completed, Genn said. He said the FDA moving to the area was the spark that has made this type of development possible.

"We have an unprecedented catalyst in the only FDA HQ in the world," Genn said. "The federal government made a $1.3B investment. Areas that are going through transformation rarely get that kind of upfront injection."

Genn will discuss the Viva White Oak development on Tuesday at Bisnow's Major Projects event at the Washington Marriott at Metro Center.