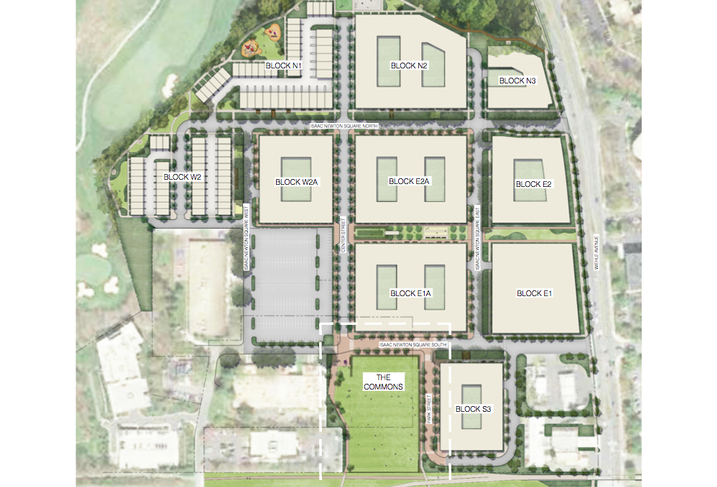 The development pipeline around the Wiehle-Reston East Metro station continues to grow, with the latest project planned for over 2,000 residential units.

A joint venture of MRP Realty and The Peter Lawrence Cos., the landowner, filed plans with Fairfax County to redevelop a 32-acre piece of Isaac Newton Square in Reston.

The plan, first reported by the Washington Business Journal, calls for roughly 2.8M SF of new construction, including about 2,100 residential units. The site currently has about 437K SF of office and industrial space. The project would add about 260K SF of commercial space, broken into 60K SF of retail and 200K SF of office. The development team is working with Oculus and Polleo Group to plan the development.

MRP founding principal Fred Rothmeijer tells Bisnow the development team hopes to break ground by late 2020 or early 2021. The initial conceptual development plan sets the street grid and overall layout of the 10-block development, and the developer would then file specific plans for each phase.

Near the intersection of Sunset Hills Road and Wiehle Avenue, the property sits about a quarter-mile from the Wiehle-Reston East Metro station, the last stop on the Silver Line's first phase. The buildings would reach up to 200 feet tall on the side closest to the Metro and step down to 160, 140 and 90 feet on the other sections.

"We want to be a transition area between the Reston as most people know it and the high-density, high-rise that you find now at Wiehle," Rothmeijer said. "The buildings will taper down and we will create more open space."

Directly on top of the Metro station, Comstock Partners has built the first high-rise office and apartment buildings at its Reston Station development, which is planned to include two additional office buildings. Nearby, JBG Smith is planning Midline, a 17-acre, 1.6M SF development.