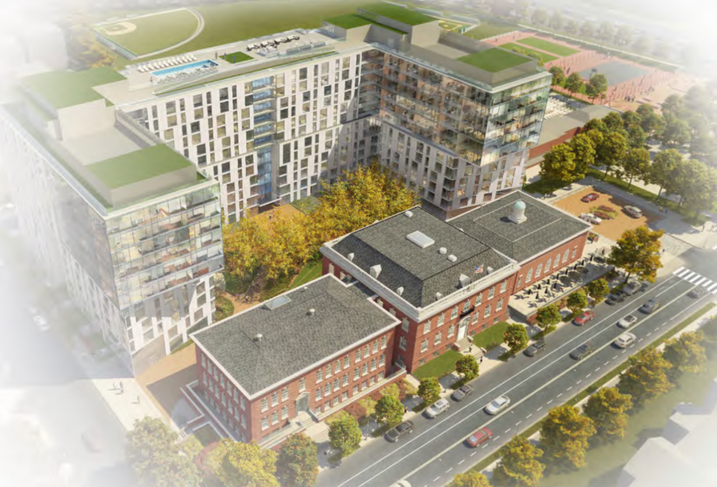 The long-planned redevelopment of a historic Southwest D.C. school is set to move forward next year.

Los Angeles-based Lowe, formerly Lowe Enterprises, closed on its acquisition of the historic Randall School at 65 I St. SW and plans to begin construction next year on a redevelopment that will add a 12-story apartment building to the property.

Lowe came on as a partner on the project in 2017 with Telesis Corp. and the Rubell Family, but it now owns 100% of the development, Lowe Executive Vice President Mark Rivers tells Bisnow. He said it acquired the property from the trustees of the Corcoran Gallery of Art, which in 2007 filed plans for a separate project that did not come to fruition.

The 2.7-acre site is near the intersection of I Street SW and South Capitol Street, roughly a half-mile from the Waterfront and Navy Yard Metro stations. It is next to a public park that features a swimming pool, a soccer field, a baseball field, tennis and basketball courts and a recreation center.

The project is slated to add a 12-story apartment building with 489 units, 98 of them set aside as affordable, next to the three historic school buildings that Lowe plans to renovate.

Two of the school buildings are planned to become a 31K SF art museum, which will offer free admission to D.C. residents and house the Rubell Family Collection. Lowe plans to convert the third into an 18K SF creative office building.

"I think it will be appealing to nonprofits and people affiliated with the arts," Rivers said of the office space. "It could be coworking, but I think it'll be more attractive to people in the nonprofit sector."

The project is one of at least five redevelopments of former schools taking place in D.C. The Randall School buildings were constructed in 1906 as the Francis L. Cardozo Elementary School and converted in 1927 to the Randall Junior High School. The school closed in 1982 and the building was then operated as a homeless shelter until 2004, but it has sat vacant since.

"The Randall School property has been boarded up now for two decades, and so to have this activation right at the front door to Southwest is really important for the community," Rivers said. "To have a space that will not only house probably over 600 residents, but also have this cultural use and events space will be really exciting for this neighborhood."

The team received its written approval order from the Zoning Commission in July 2018, but its approval was appealed the following month by a group of residents. The D.C. Court of Appeals dismissed the appeal in January, part of a string of development appeals cases that have been resolved this year.

Rivers said the appeal did not significantly delay the project's timeline. He said Lowe plans to begin construction in mid-2020 and complete the project in 2022.