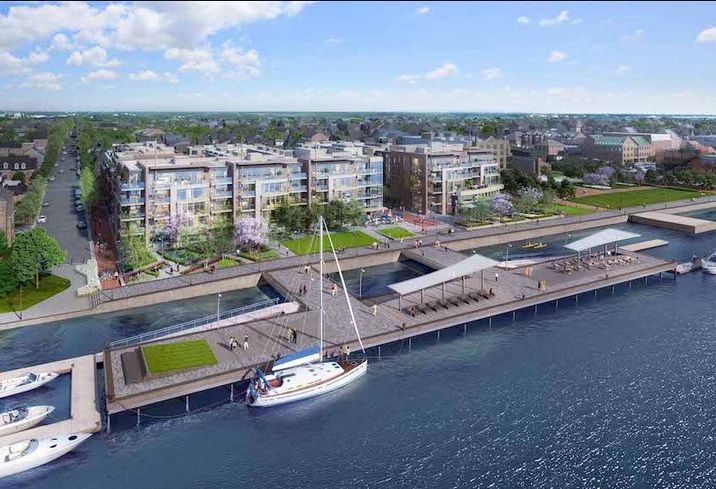 Mitsui Fudosan, a Japanese investor with a major stake in New York City's Hudson Yards megaproject, has announced its second investment in a D.C.-area development in as many weeks.

The investor is partnering with EYA and JBG Fund IX — a private fund managed by JBG Smith — to develop the $185M Robinson Landing waterfront project in Old Town Alexandria.

The project, sitting on a 3.2-acre site bordered by Duke, Union and Wolfe streets, will feature 26 townhouses, 70 condo units, a market and a waterfront restaurant. It will also repurpose the pier with a café and seating areas and create a 20-foot-wide green promenade along the water. EYA Marketing began selling the townhouses in November and has sold 15 residences.

The development team, advised by HFF, began construction on the first townhouses in January and expects to complete them this fall. It plans to begin building the two five-story condo buildings later this year and complete the full development by 2020.

“We are thrilled to be working with a global leader like Mitsui to create a vibrant waterfront neighborhood with unique architecture that will be the southern anchor to the Old Town waterfront,” EYA President Bob Youngentob said in a release. “Robinson Landing will be one of the most desirable waterfront addresses in Washington, D.C., and the Mid-Atlantic.”

The Japanese investor is also partnering with Eastbanc on a $120M multifamily project in Adams Morgan. Mitsui owns a controlling stake in The Homer Building and is an equity partner on office buildings in Downtown D.C. and Ballston as well.