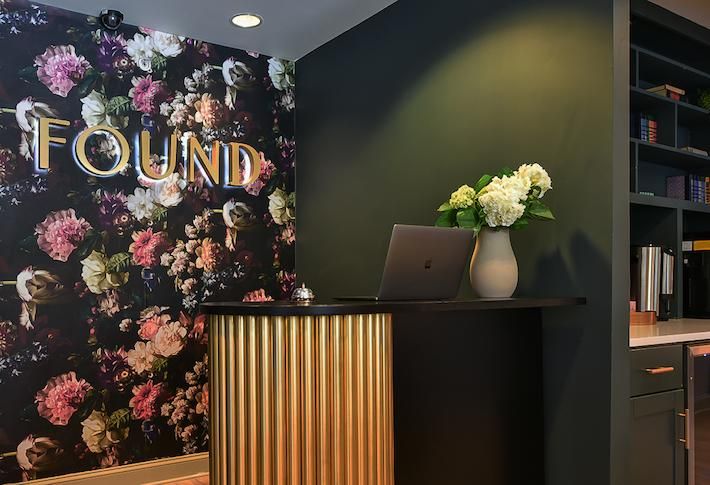 Courtesy of Found Hotels
The lobby in a Found hotel

Hotel brands continue to expand to the nation's capital, with the latest new entrant coming to Dupont Circle.

Found Hotels announced plans for a Sept. 21 opening of the Dupont Circle Embassy Inn by Found at 1627 16th St. NW, its first location in D.C.

Los Angeles-based Hawkins Way Capital created the Found brand and has opened hotels in Boston, Chicago and San Diego. The company said it has dedicated over $500M to acquire, renovate and rebrand properties, with a goal of opening 12 Found hotels by 2021.

An affiliate of Hawkins Way Capital acquired the 39-room Embassy Inn hotel in June 2018 for $10M, property records show. The company said it then launched a $1M renovation, adding a coworking space and a communal guest kitchen. On each floor, the owners installed neon silhouettes of the nation's Founding Fathers. The hotel is also offering bicycles for its guests to rent.

The property is the first hotel the company is branding as a "by Found" hotel, which it says is a variation on its Found brand that it describes as a "low-cost high-value budget lifestyle" hotel. It worked with design firm Guilfoil & Wulfson on the project.

"We are excited to roll out our 'by Found' hospitality brand starting with Dupont Circle in Washington, D.C.," Hawkins Way Capital Managing Partner Ross Walker said in a release. "There aren't enough appealing budget lifestyle hotel accommodations in locations like this that really incorporate the neighborhood."