The International Spy Museum will reopen Sunday in a new building twice the size of its original location, and its founder hopes it will also bring in twice the number of people. 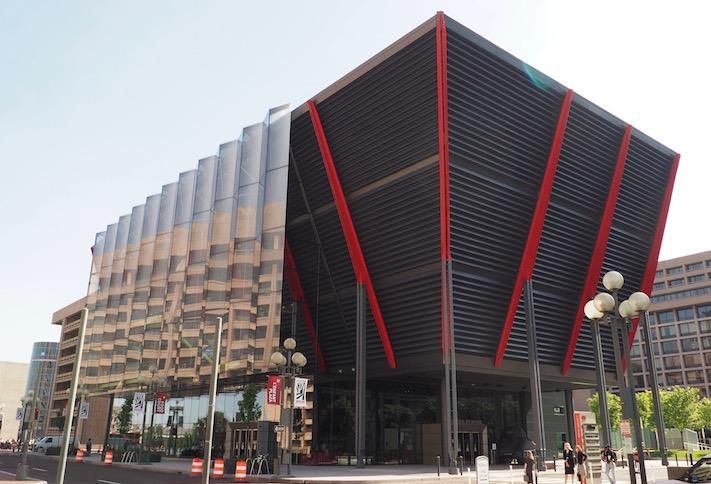 To achieve that attendance boost, the museum's creators thought strategically about everything from the building's exterior design to the number of elevator shafts, with an eye toward drawing people in by the thousands and moving them comfortably through the space.

The eight-story building at 700 L'Enfant Plaza SW, designed by architecture firm Rogers Stirk Harbour & Partners, stands out among the brutalist-style structures around L'Enfant Plaza. It sits directly in between the National Mall and The Wharf, two areas bustling with visitors that planners hope the new museum will help connect.

The Spy Museum moves to Southwest D.C. from Chinatown, where it occupied a historic building one block from Capital One Arena. The museum brought in 600,000 people last year at that location, Spy Museum founder Milton Maltz said, but it ran out of room to grow.

"We could only hold so many people," Maltz told Bisnow during a media preview at the museum Tuesday. "We were doing the max already at 600,000 a year, and here we're going to double that."

Maltz, chairman of The Malrite Co., provided a majority of the financing for the $162M project. Through a nonprofit organization, his family provided $112M in funding, and the remaining $50M was taken out as a revenue bond that Maltz personally guaranteed. 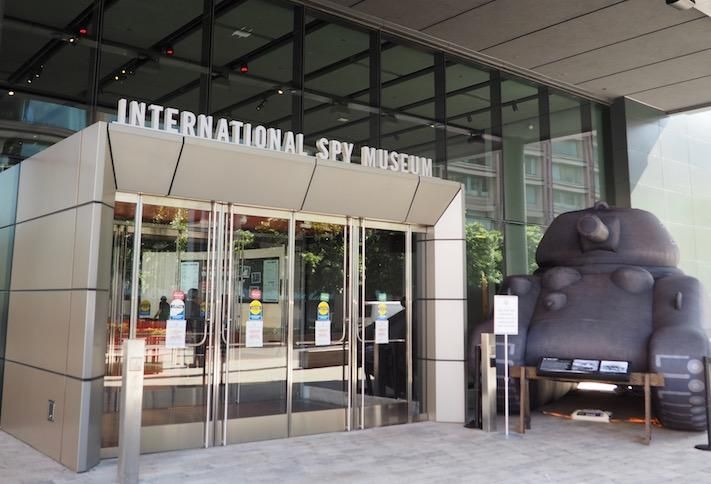 The museum owns its building after purchasing the air rights above the L'Enfant Plaza food court from JBG Smith. Malrite Co. President and Spy Museum board member James Gomez said that puts it in a much more advantageous financial position than it had with its Chinatown building, which it leased from Douglas Development Corp.

The monthly payment on the debt for the new project is roughly the same as the rent payment at its previous location, Gomez said, helping it maintain its financial stability.

"We bought ourselves a little bit of wiggle room," Gomez said. "We swapped a lease payment with a mortgage payment."

Financial stability is nothing to take for granted for museums in D.C. these days.

The Newseum in January decided to sell its Pennsylvania Avenue building after reportedly struggling to pay its $300M in debt. And the new National Law Enforcement Museum in Judiciary Square missed its attendance targets in the first few months after its October opening, causing it to reduce staff, hike ticket prices and fail to make interest payments on its bonds. 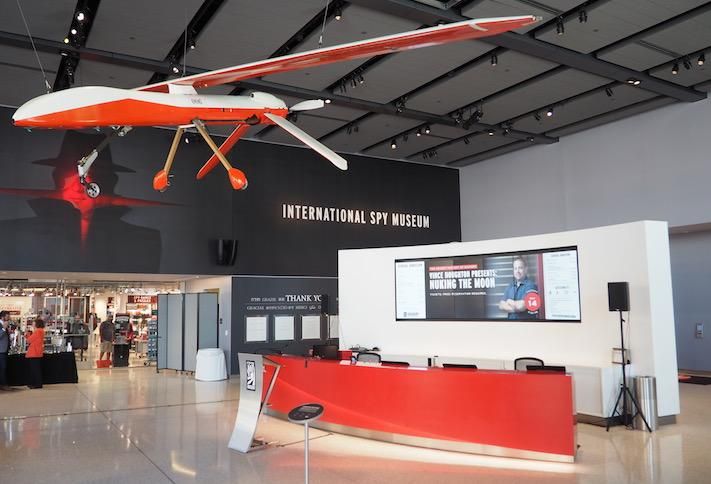 Those two museums, like the Spy Museum, charge ticket prices for visitors in a city that offers over a dozen free Smithsonian museums.

The Spy Museum had charged between $14 and $20 for tickets at its old location. The new museum brought the price up to $14.95 for children, $19.95 for seniors, college students and members of law enforcement and the military, and $24.95 for adults, with a $2 discount offered to online purchasers.

"Museums that are paid attractions are always going to be forced with trying to find a way to compete with a city that has over 16 free museums," said Elliott Ferguson, CEO of Destination D.C., the city's tourism agency. "You have to start off by realizing that free is a very attractive word to visitors ... so you've got to have something that makes me want to pay to come see you and experience your museum since I have so many other options."

Ferguson believes the new Spy Museum is an attraction worth paying for. The museum features dozens of new exhibits and over 7,000 new historical artifacts that were not in its previous home. 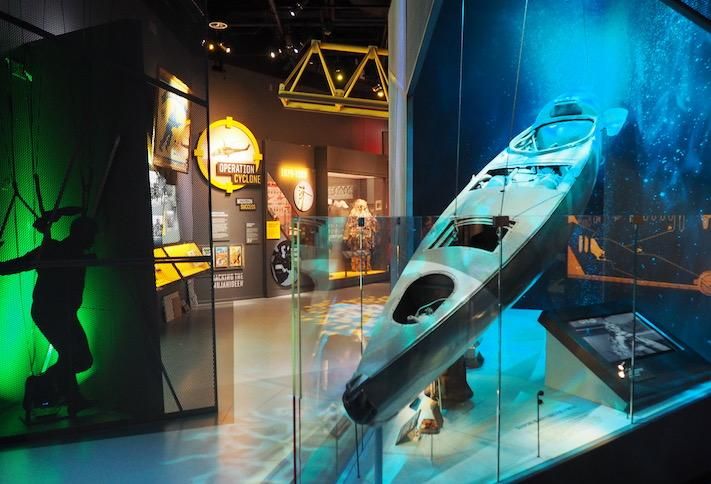 Bisnow/Jon Banister
An exhibit in the International Spy Museum

The Spy Museum explores the tactics and technology of espionage through various historical periods such as the Revolutionary War, World War II and the Cold War. Its artifacts include a handwritten letter from George Washington that launched a spy network during the American Revolution, a submarine from World War II, a piece of the Berlin Wall, and hanging in the lobby is one of the first drones ever produced.

The museum features several interactive exhibits that use technology to allow visitors to participate in secret missions modeled after major events, such as the hunt for Osama bin Laden.

The new museum also includes a host of structural advantages over its old building that will help bring in revenue, Spy Museum President Tamara Christian said.

On the seventh floor and eighth-level rooftop penthouse, it features an event space with 360-degree views around D.C. The space has already opened and hosted an FBI dinner, and Christian said it has received strong interest as a wedding venue.

"The private events part is very important to any museum, because ticket prices, no matter what, do not pay for the operating costs of the museum," Christian said. "You need to do other things." 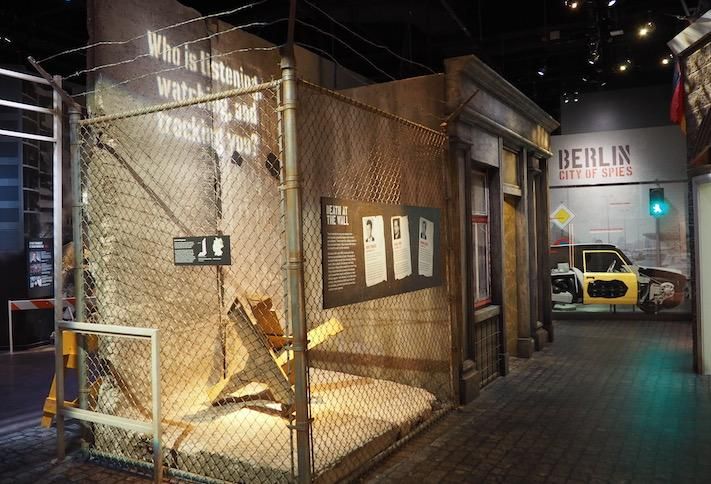 The exhibit spaces on the fourth and fifth floors have large, open floor plans that give the museum flexibility to switch out exhibits and keep the material fresh for visitors that come back multiple times. It also has a 7K SF temporary exhibit space on the third floor, which will feature a rotating roster of short-term attractions it can market to potential visitors.

"One of the reasons that we wanted to move out of our old location is that our old location did not allow us to have temporary exhibit space," Christian said. "We can refresh much easier than we could before." 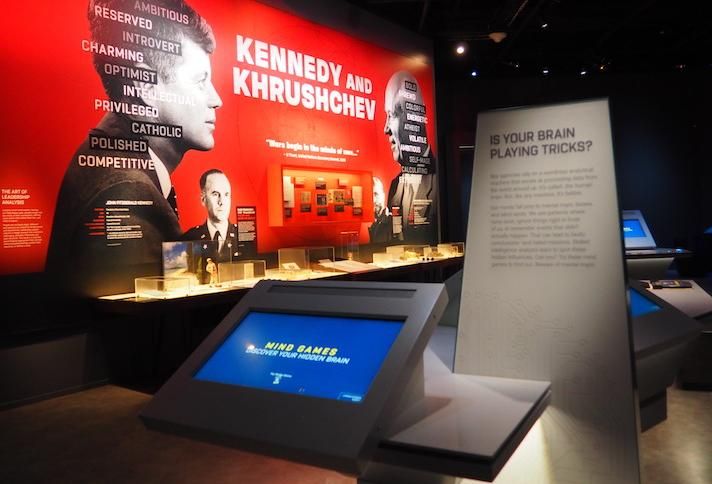 Another big advantage over the old location is the tour bus drop-off space. The Chinatown museum could only welcome one tour bus at a time, preventing some big groups such as school field trips from attending, but the new museum has space for three tour buses.

It also has three elevators, whereas the previous building only had one, making it difficult to bring in large groups. Tour groups made up about 12% of the Spy Museum's business at the old location, Christian said, and she expects the increased capacity will lead to groups comprising a larger share at the new museum.

"For us, tour groups are a very big deal," Christian said. "It's going to be much bigger in our new museum." 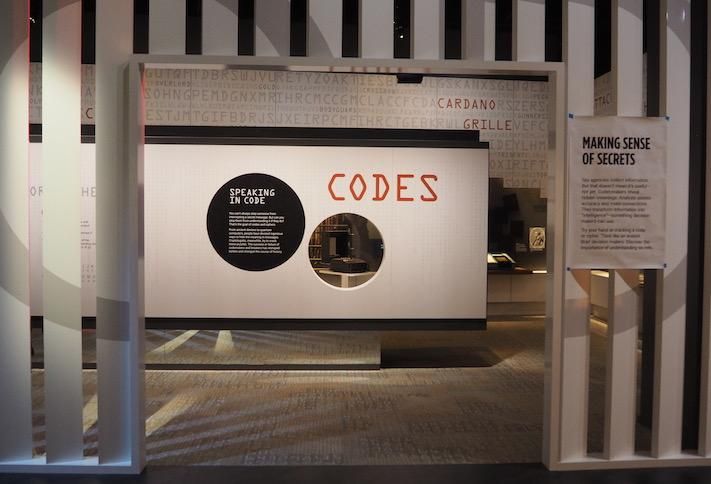 Local leaders expect the flow of visitors coming into the Spy Museum will have a positive effect on Southwest D.C. Southwest BID Executive Director Steve Moore said he expects the museum will reinvigorate the food court at L'Enfant Plaza and help other nearby restaurants and hotels.

He also expects it will help create a cohesive corridor between the National Mall and Southwest Waterfront, where megaproject The Wharf opened in 2017. The museum is working with the BID to install seating and landscaping elements on L'Enfant Plaza around the museum and on the street that connects it to the National Mall and The Wharf. A free shuttle bus that began its route around Southwest D.C. when The Wharf opened will now have a stop at the Spy Museum.

"A dozen things came together at one time, and Spy Museum is really the glue here I think connecting everything to the north and south," Moore said. "The Spy Museum is the centerpiece." 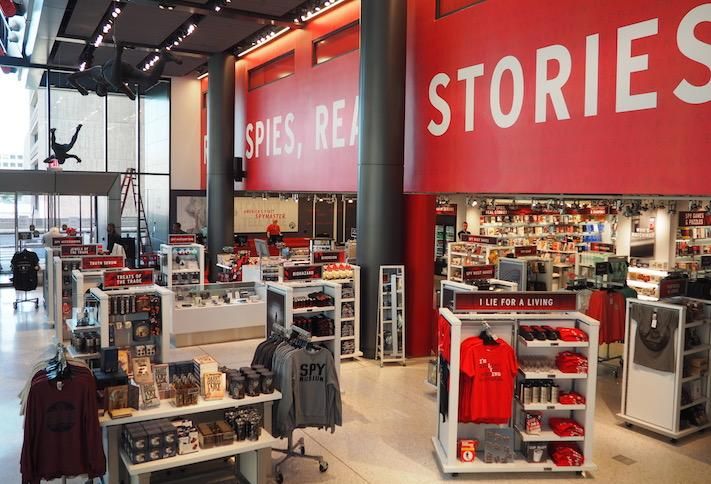 Bisnow/Jon Banister
The gift shop in the International Spy Museum

Moore also said that museums in D.C. face a large amount of competition for visitors that can make it challenging, especially for ones that charge money for tickets.

"Whether it's Spy Museum, Museum of the Bible or the Holocaust Museum, you have to bring it all the time," Moore said. "You've got to create new reasons to come. It's a real challenge to run any of these cultural institutions. These things aren't a given. I think the team at Spy is going to have to work every day, but I also think they're capable of it."