Here's What D.C. Looked Like In 1933, The Last Time The City Hosted A World Series

The Fall Classic is returning to the nation's capital for the first time in eight decades. 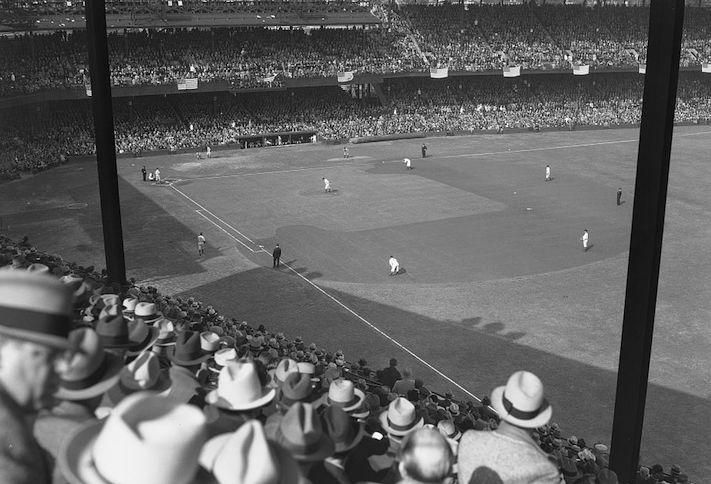 The Nationals play the Houston Astros in the first game of the World Series Tuesday night, and D.C. will host a World Series game Friday for the first time since the Washington Senators played the New York Giants in 1933.

The Senators lineup in that series featured Hall of Famers including Goose Goslin and Heinie Manush. Not only did the names on the scorecard look different than they do today, the 1933 World Series was played in a city that would be barely recognizable if Steven Strasburg or Juan Soto were to travel back in time.

The ballpark, Griffith Stadium, sat in Northwest at the intersection of Georgia Avenue and Florida Avenue, on a site now occupied by Howard University Hospital. 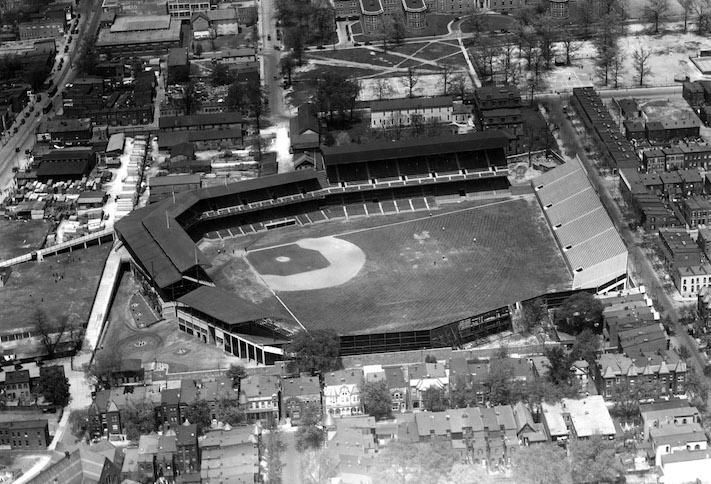 National Archives
A 1925 aerial photo of the neighborhood around Griffith Stadium in Northwest D.C.

The historically black university anchored the largely residential neighborhood, which served as a center for the African American community with the U Street corridor just to the west. The area also featured some industrial properties such as the Wonder Bread Factory, which remains today and has been renovated into a WeWork coworking space. A streetcar that ran down Georgia Avenue brought baseball fans in the 1930s to the ballpark from the residential neighborhoods to the north.

"It was middle class and it was a very lively place," D.C. Historical Society Chief Historian Jane Levey said of the neighborhood in the 1930s. "When there was a game you had a whole bunch of people coming in on the streetcar ... you can't underestimate the impact of having a team in the city where you can actually go and watch them."

Support the home team and save! Use GONATS to save 20% on all D.C. events.

With television not yet available, people looking to watch the World Series in 1933 needed to see it in person. They could also listen on the radio or follow along on the scoreboard that the Washington Post operated outside its building at 14th and E streets NE.

In my dreams, we would install a replica of this bad boy outside @washingtonpost HQ for the World Series and update it during every game pic.twitter.com/yTWdhMihao

The 1933 World Series is remembered in history not only because it was the last time Major League Baseball's championship was hosted in Washington, but because newly elected President Franklin D. Roosevelt attended a game and threw out the first pitch. 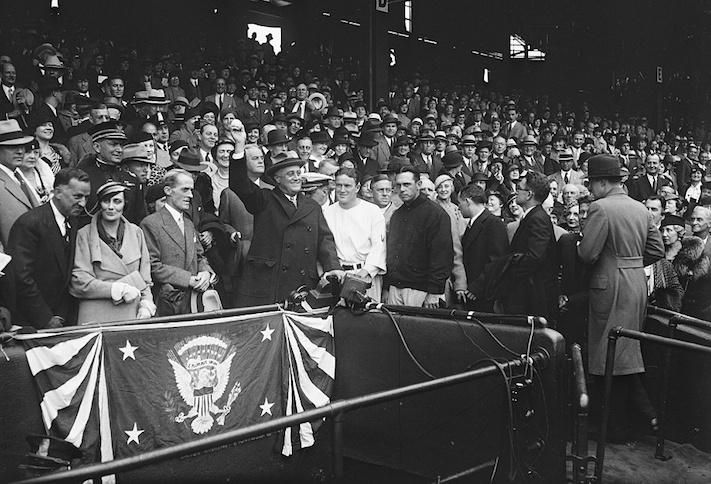 The game took place five months after Roosevelt's inauguration, but the impact of his presidency could already be felt in the city. The United States in 1933 was four years into the Great Depression, but Roosevelt's first year was marked by the implementation of a host of New Deal programs aimed at jolting life back into the U.S. economy.

Just as increased federal spending today benefits the D.C.-area economy, the New Deal programs helped make Washington a healthy city with more opportunities than many parts of the country.

"By the time of the 1933 World Series, employment is growing in Washington because of the federal programs," Levey said. 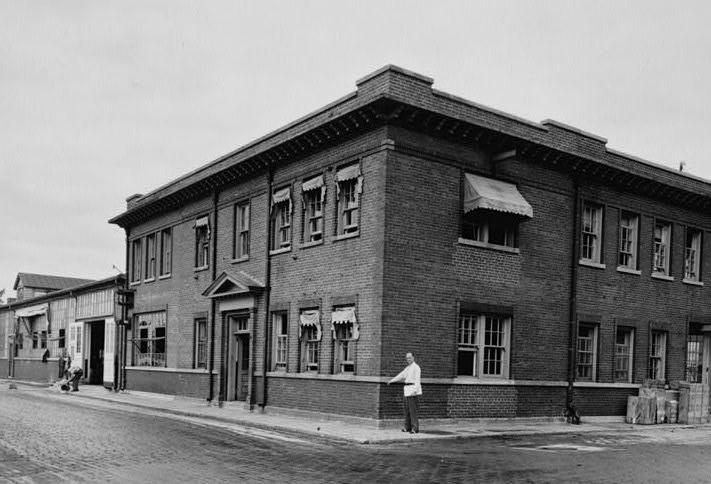 Library of Congress
A 1933 photo of the Washington Navy Yard's Building 142, used for the research of radio technology

Some of that activity could be felt in the Southeast D.C. neighborhood where Nationals Park sits today, and where this generation's crowd of World Series fans will soon congregate. The neighborhood at the time was dominated by the Navy Yard and the Naval Gun Factory, a major industrial facility for producing weaponry.

"The Navy Yard was very active," Levey said. "It was really the Naval Gun Factory, which was one of our first true factories in Washington. The area around it had people working in the factory and some small businesses." 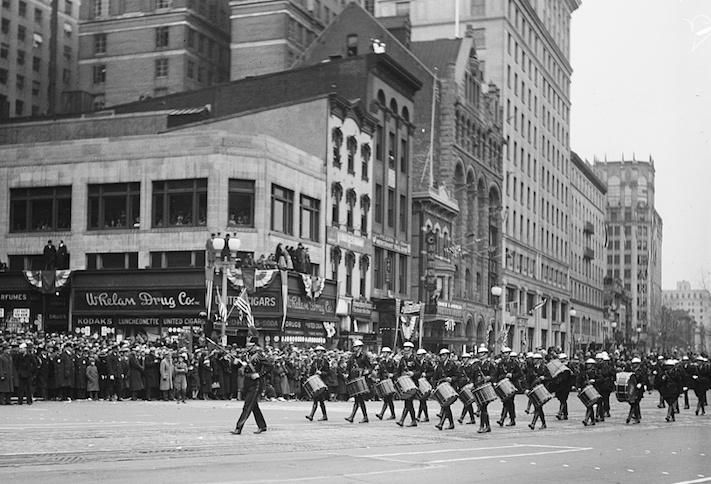 Pennsylvania Avenue, the ceremonial corridor that hosted Roosevelt's 1933 inauguration parade, would also have looked very different in those years.

Much of the north side of the street was lined with small businesses. If he looked south during his 1933 inauguration, Roosevelt would have seen the largest active construction site in the District. 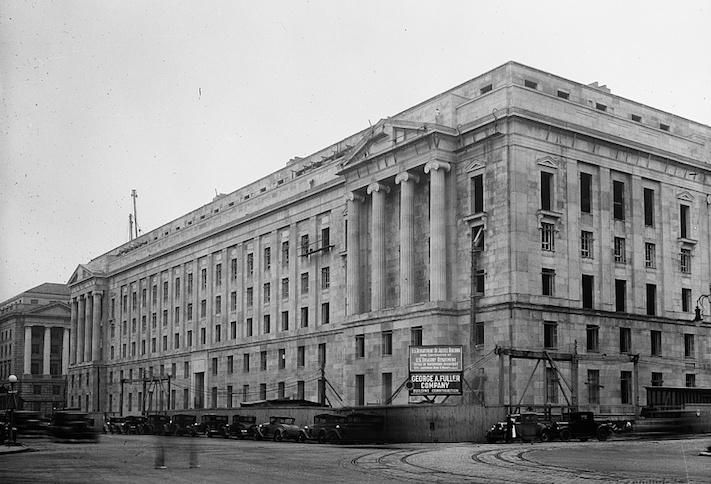 Library of Congress
A 1933 picture of construction underway on the Department of Justice headquarters, part of the Federal Triangle complex

The Federal Triangle complex, a five-block cluster of government office buildings, was largely under construction in 1933.

The project broke ground in 1929 and was completed in 1938, Levey said. During that time, the buildings that now house the Department of Justice, the Department of Commerce, the IRS, the Environmental Protection Agency, the National Archives and the Federal Trade Commission were all built. 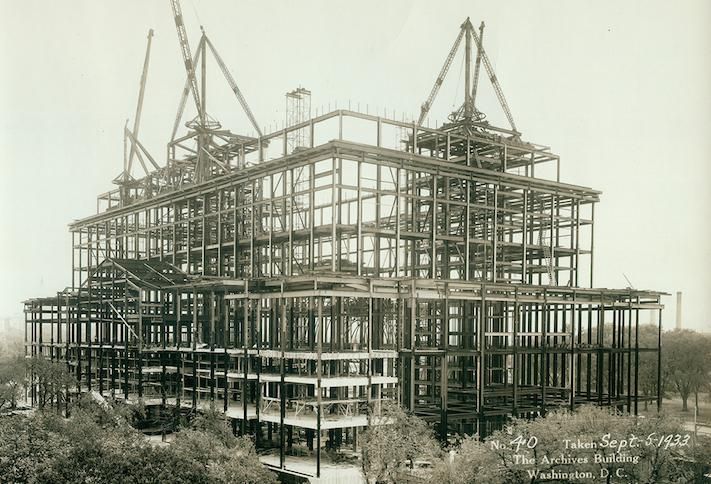 The only buildings standing in Federal Triangle prior to the project were the Old Post Office building, now home to a Trump International Hotel, and the John A. Wilson Building, the home of the D.C. government. The Ronald Reagan Building and International Trade Center was constructed decades later.

The National Archives was built on a site that was home to Center Market, a 2-acre property designated by President George Washington as a public marketplace in 1797. It lasted there for 134 years, serving as a lively hub for residents and visitors to buy and sell goods, until the site was demolished in 1931 to make way for the Archives building, which today houses the Declaration of Independence and the U.S. Constitution, which bears Washington's signature. 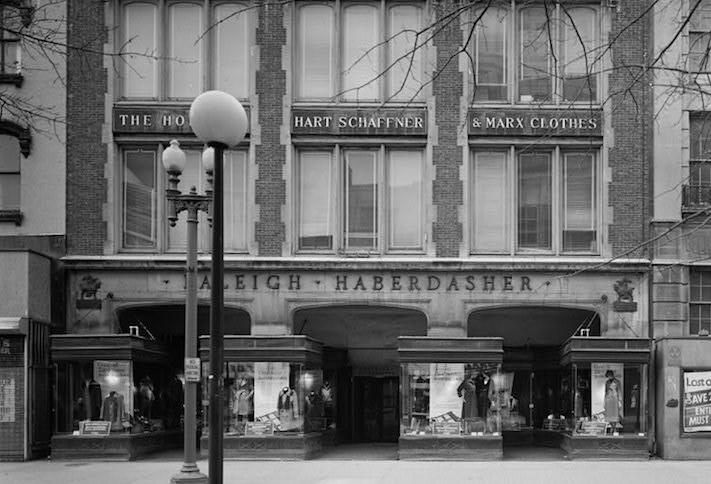 The neighborhood to the north of Pennsylavania Avenue, parts of which are now referred to as the East End, Penn Quarter or Chinatown, served as the city's main downtown area in the 1930s. The city's downtown center of gravity would not shift west toward Farragut Square until decades later.

"F Street and Seventh Street were the main shopping districts for the city," Levey said. "There were a lot of businesses down there."

The Carnegie Library, which today includes an Apple store and the D.C. History Center, in the 1930s served as the city's central public library. The area to the north of that, which now features the Walter E. Washington Convention Center, was a residential neighborhood with a Greek immigrant community anchored by a large Greek Orthodox church.

Major construction projects underway in the early 1930s also included the Supreme Court Building, completed in 1935, and the National Cathedral, which took 83 years to build after construction began in 1907. 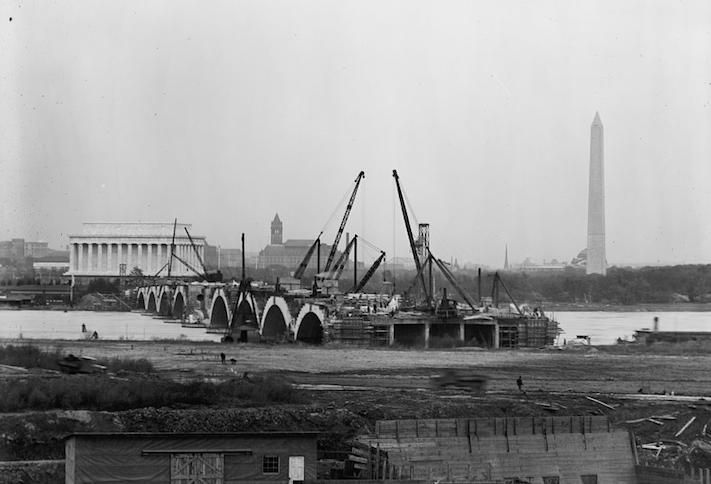 Wikimedia Commons
A photo of the Arlington Memorial Bridge under construction, a project that lasted from 1925 to 1932

Construction on the Arlington Memorial Bridge, which connects the Lincoln Memorial and Arlington National Cemetery, completed in 1932. The bridge, conceived of in the 1920s, was designed as a symbol to reunify the two halves of the country that had split six decades earlier.

"It was important because it was symbolic of reconnecting the North and the South," Levey said. "It was still in the wake of the Civil War that bridge happened."

This week, Virginia, Maryland and the District itself will unite, rooting for the Nationals in their first-ever World Series. They can only hope it doesn't take 86 more years until the next one.