Yes, this is a picture of last night’s college championship between Oregon and Ohio State in Arlington, Texas—but that’s not the point. This story is about a huge game-changer in Reston. Read on for the connection. 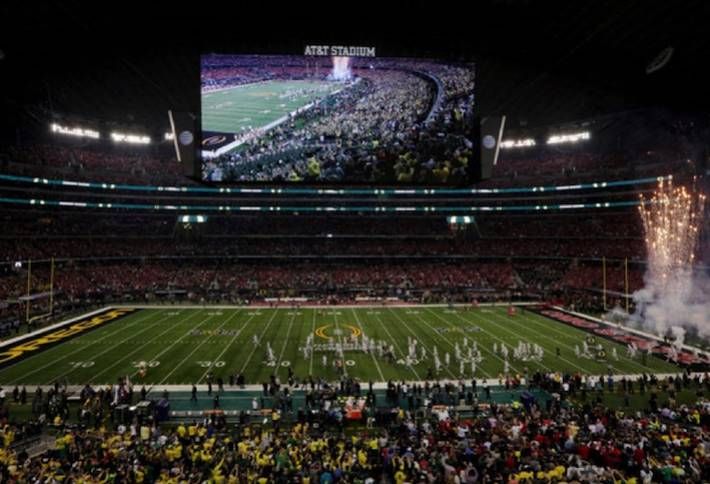 27 football fields is the size of the underground parking that Fairfax County and Comstock Partners opened last fall to support the Wiehle Avenue Metro. Over the last two years $100M was spent to create 2,300 spaces. So what? 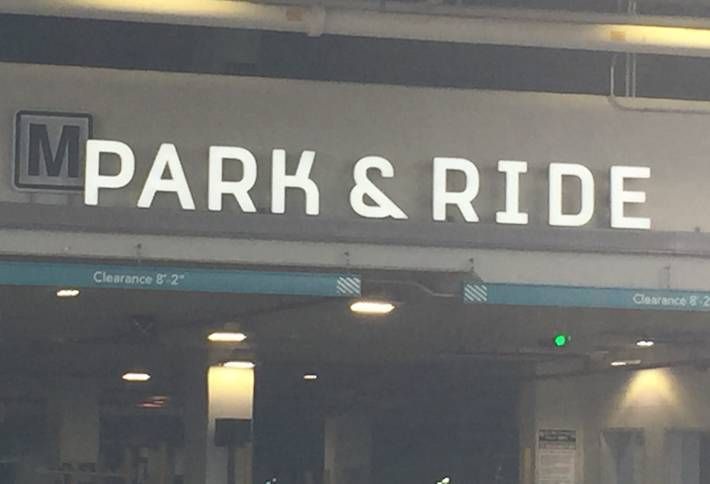 BINGO #1: This is what one of the parking entrances looked like this morning (there's also a separate Comstock facility for another 800 cars). 20,000 people from points beyond now come to Reston every day who previously raced right past it (or crept, depending on Toll Road traffic). Either they’re available to do some eating or shopping when they’re out of their car, or they realize they could save the car hassle by living there. Either way, Reston has a significant new pool of consumers and potential residents. 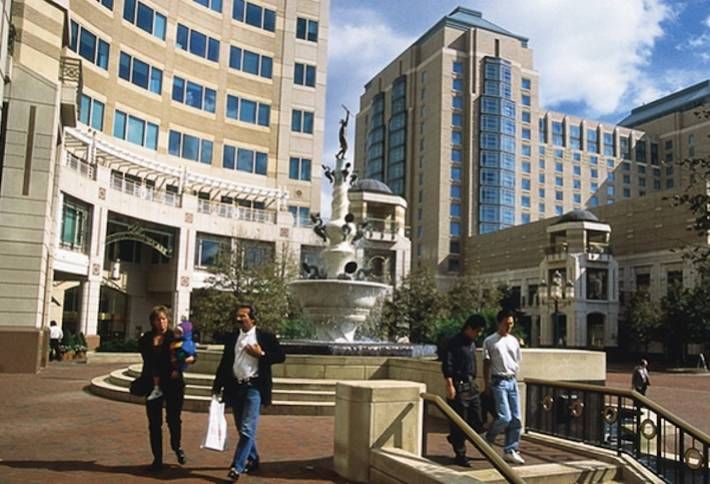 Bingo #2: For the last 10 years, Reston Town Center, a glistening mixed-use campus one mile away, has been the monster success of the area, with a critical mass of retail, multifamily and open spaces to support 2.8M SF of office, and sustain much higher occupancy and rents. Reston areas outside this bastion have been perceived as less desirable. But Reston Town Center has no Metro running through it. 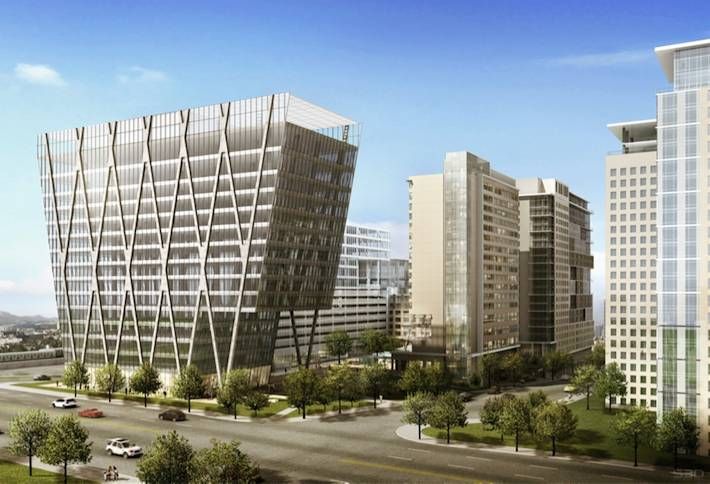 Enter Reston Station—a 7-acre mixed-use, transit-oriented development composed of five buildings on top of the 1.5M SF transit center. Three will be office, including this centerpiece: a 16-story 350k SF trophy from famed architect Helmut Jahn (typically known for iconic urban towers in the world’s premier cities). It’s not built yet—you can tell it's a rendering because it looks blue, green and warm. Comstock wants to get a couple anchor tenants for at least 100k SF before breaking ground. 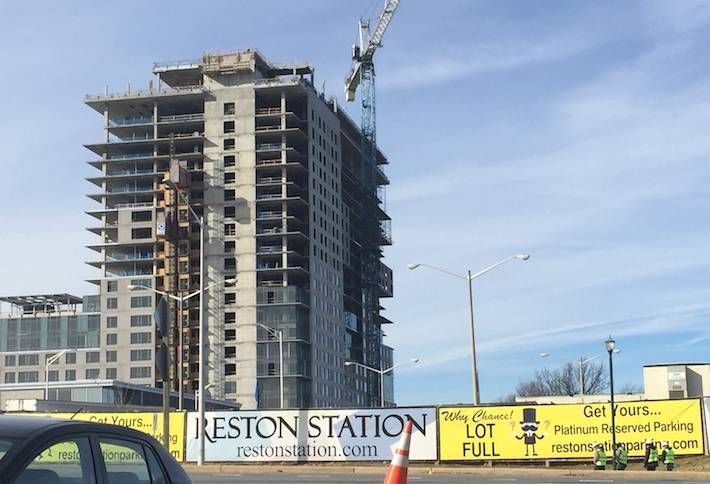 A fourth building will be BLVD, just topped out last month: 448 luxury apartments in 21 stories. This picture was taken today--you can tell because it looks colder than the last picture. 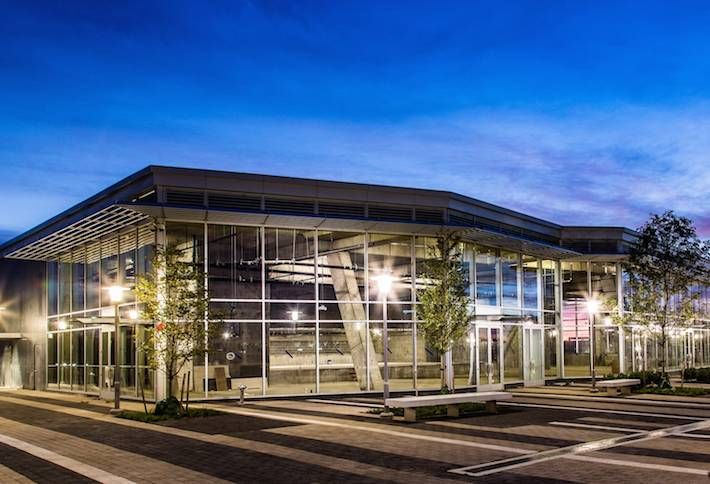 Ah, back to those warm renderings: The fifth building will eventually be a 15-story, 200-room hotel, to begin construction after a flag is decided. Until then, it will be a low-slung 11k retail space on the bottom, which is intended as Northern Virginia’s “Union Market” (a reference for you suburbanites to NoMa Adjacent’s hip food emporium, or if you’re a New Yorker or San Franciscan, their Chelsea Market or Ferry Building). The shell is built, and fit-out plans are being submitted for permitting to Fairfax County next week. 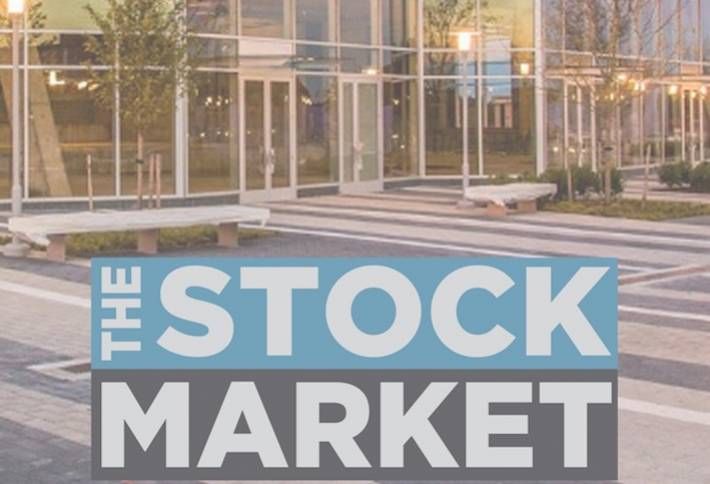 It will have such an urban feel, they’re even giving it a Wall Street name. Non-chain restaurants, bars, butcher, fishmonger, food incubator spaces, newsstand, music venue, all from 6:30 to midnight. (Which for weekdays would be pretty late even for DC, or as we call it, The City That Goes To Sleep Early.) 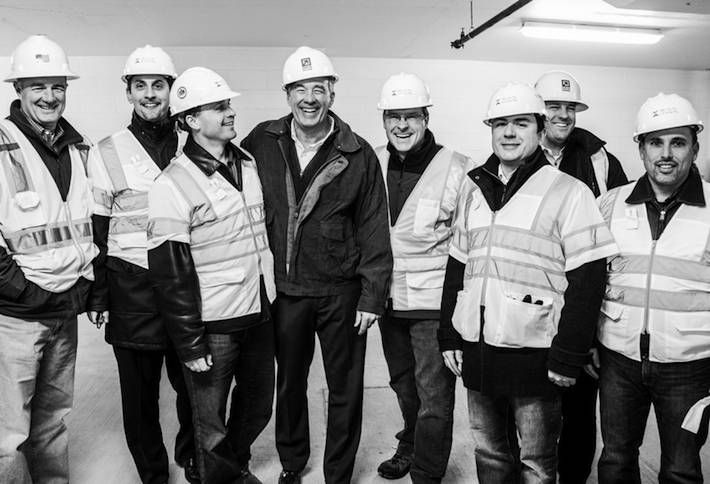 No, this is not a fashion show, but a celebration of the monumental building effort led by Davis Construction’s Jim Davis, center, and his colleague Mike Pittsman (second from right) with Comstock’s Scot Miller, Chris Guthrie and Dan Slear on the left, and Phil London, Michael Gualtieri and Larry Bergner. 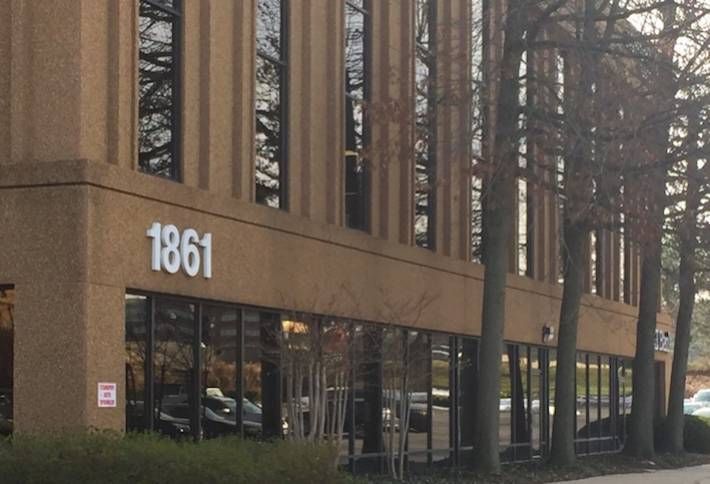 Across the street, on this old site and nearby ones, snapped this morning, other developers are pursuing plans. JBG, for example, is planning 504 multifamily units and 61k SF of retail in two buildings. Everything in the vicinity, we're told, is already entitled for mixed-use development. 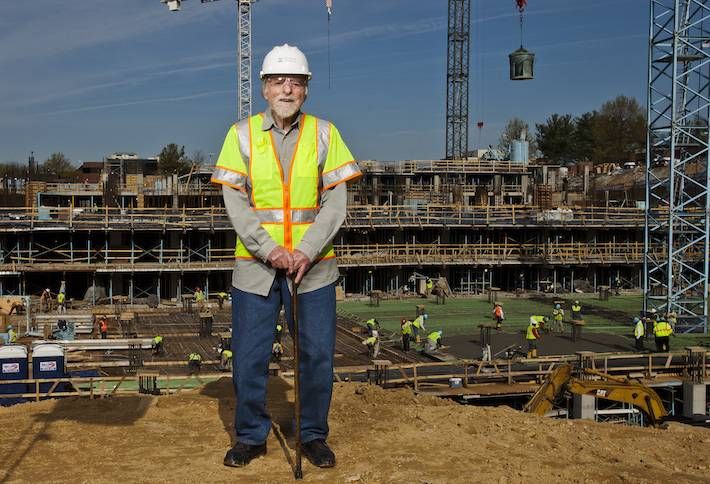 Here’s the spry 100-year-old Robert E. Simon (literally the RES in Reston) who envisioned the village walkability that Reston Station seeks to emulate. It figures that, with its pedestrian volume equal now to Reston Town Center’s (not just from commuters but 40,000 nearby residents who can readily walk or bike over), it’s the living model of TOD. Ironically, though the critical mass will arrive because of the parking garage, over time they believe it will become the mecca of foot traffic. As for Bob Simon's feet, after this picture was taken at the Reston Station dig a year ago, he walked down a long dirt path into the construction hole, and then back up. Of course, he was only 99 back then.