8 Big Takeaways from DC State of the Market

The DC commercial real estate market is enjoying one of its strongest years in recent memory. Cranes dot the city skyline and everyone, like Vornado president Mitchell Schear, is wearing their rose-colored glasses. The biggest names in DC's development industry were at Bisnow's Washington State of the Market this morning, radiating in the hot market (and the sweltering July heat). 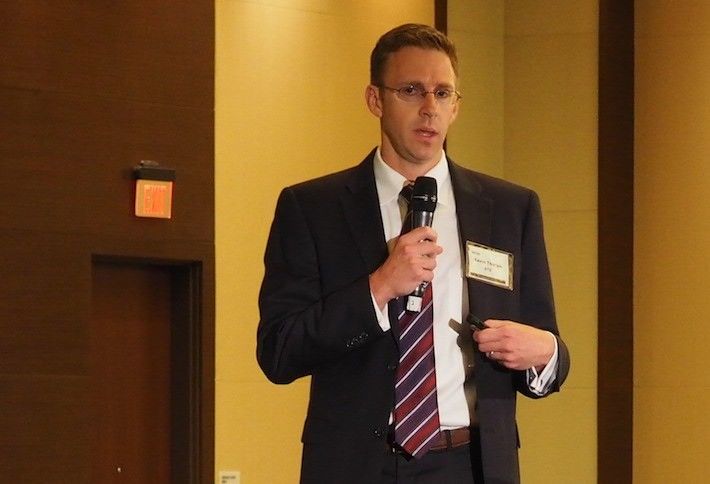 The close to 1,000 in attendance at the Marriott Marquis knew that the numbers on DC's economy so far in 2015 were good, but to hear DTZ chief economist Kevin Thorpe give everyone the big picture still created a noticeable buzz. He dismissed fears that global economic turmoil could dampen the US market and that Fed rate hikes could slow the market's breakneck growth. On the contrary, he doesn't see a bubble coming at all: Kevin estimates there's close to $600B waiting to enter the US commercial real estate market. "There is far more capital in this economy than there is real estate to buy," he says. Because of that, it might be time to rethink prices in the market. A 5% cap rate in DC for a building "is really attractive." DC was below Detroit in terms of net new jobs in 2014, and not even in the top 30 cities in America. Through June, DC is now the No. 7 city for new jobs in the country, ahead of San Francisco. Even if the strong national economy experiences a dip, Kevin is completely bullish on the federal city. "There's no market on the globe more recession-resilient than DC," he says. "It will survive, rise up first, and emerge stronger every time." 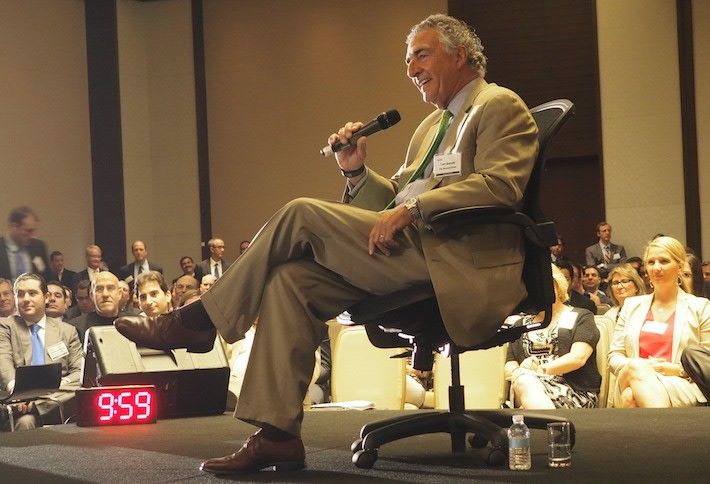 Bozzuto Group CEO and chairman Tom Bozzuto says the apartment industry is in "the seventh inning of a doubleheader." DC is absorbing 14,000 units a year, and last year there were more apartment construction starts than there had been in three decades. "Everybody is in shock" by the continued demand, and although Tom expects a lull over the next few years, by the end of the decade he thinks the market will be even stronger. The largest population group in the country is 24-year-olds, he informed the crowd, and they are part of the Millennial group that's delaying big life steps like marriage and homeownership, leading to a deeper pool of renters. His company's future looks bright, too. He's been at the helm for almost three decades, but has already named his son Toby as his successor as CEO. But don't expect Tom to go anywhere: he says he'll stay on as chairman, but will try "to get the hell out of the way" of the good people at Bozzuto. 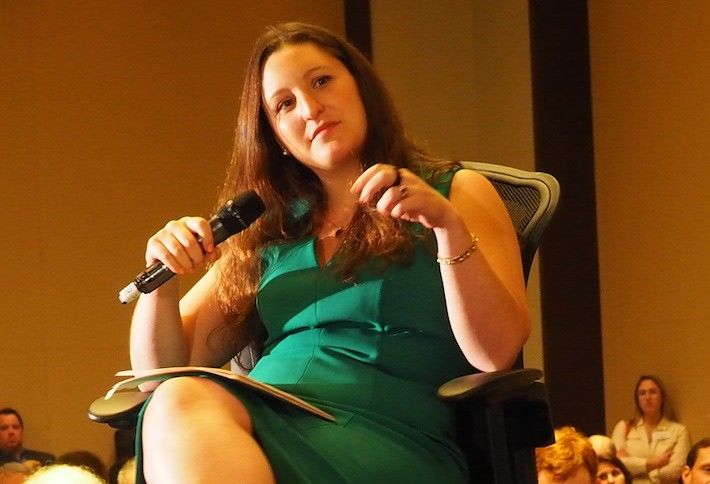 The younger generation is what's driving the historic apartment demand and pushing employers to look almost exclusively at trophy office space, with higher ceilings and fewer columns. One Millennial graced the stage this morning: Katie Keenan, a principal at Blackstone running its lending arm. She controls $10B in investments, and is bullish on Toronto and Mexico City, as well as DC. Mitchell talked about filling the 8M SF Vornado owns in Crystal City with innovative, young companies, and trying to find ways to attract them, like building "third places" where people like to gather outside of their home or office. "People want to be urban," he says. "It will not only continue, but intensify." What happens when the Millennials grow up and procreate? "We're going to have to wait and see," Mitchell says. "Or guess."

Government Could Do More to Help 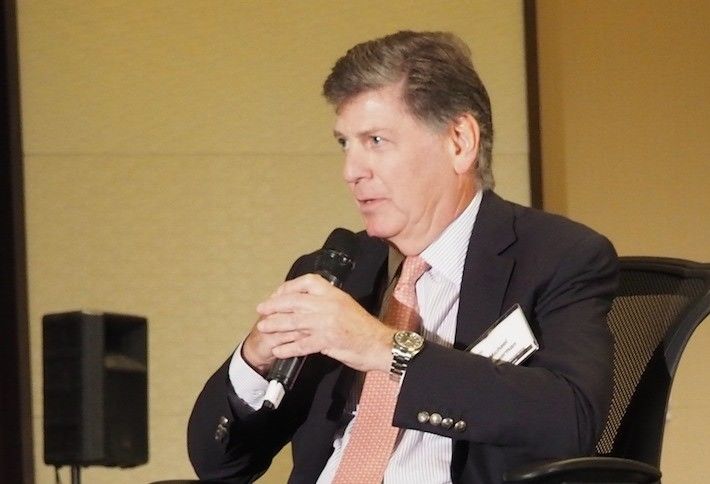 JBG managing partner Michael Glosserman dropped the best analogy of the morning, describing the DC office market and its relationship to the federal government. "Think of a great wedding that has a fabulous band," he said. "It's playing all night, everyone's dancing and having fun. Then the band takes a break, and somebody forgot to put the CD on to play during the break. The band is going to come back, but we don't know when." The Feds won't keep shrinking its office footprint forever, but until it starts to grow again, the market won't reach its full potential. Not helping matters, Michael says, is the local jurisdictions fighting each other to poach office tenants. While DC, Maryland and Virginia fall over themselves to woo Marriott, a company already here and a deal that won't bring new jobs to the region, they should form a partnership, he says. "We act like a dysfunctional family," he says. "They need to work together to get a company like Google to move their HQ here." 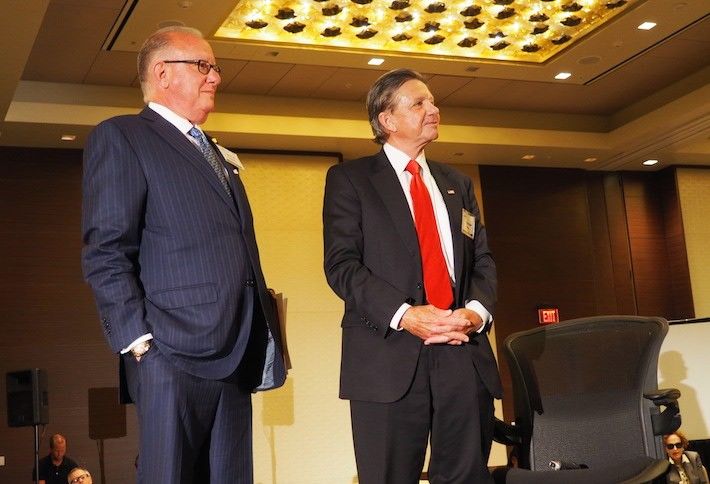 EagleBank founder and CEO Ron Paul closed the event in an interview with Chip Akridge, the founder of his eponymous commercial real estate firm. Chip, one of the scions of DC commercial real estate, had hundreds in the crowd transfixed when he started his remarks by discussing the 13% vacancy rate of DC office properties, and "over half that space is unleaseable." Even new suburban office parks have "locational obsolescence" and 1970s and '80s office buildings are functionally obsolete. Instead of trying to lease the unleaseable, Chip has been selling off properties or tearing them down and building new ones. Just yesterday, he agreed to sell a repositioned Bethesda office building to a German firm for $627 PSF. The building is now a 10-story gem and almost fully occupied. 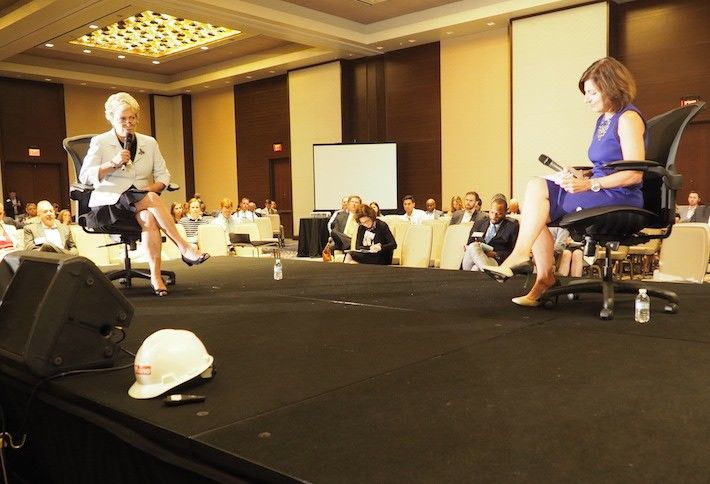 Lots of companies went belly up, the entire market ground to a halt and millions of people nationwide lost their jobs. But the recession also provided an opportunity to reassess. Rand Construction CEO Linda Rabbitt, talking with Cardinal Bank's Joann Tobin, says her luxury interior contracting firm had no market after the market crashed. The company could have stagnated or maybe folded, but instead she decided to double down and expand nationally. "You have to be really nimble," she says. "If you don't accept that the world is moving quickly, you get left behind. And these days you get left behind more quickly."

No. Really. It Wasn't All Bad. 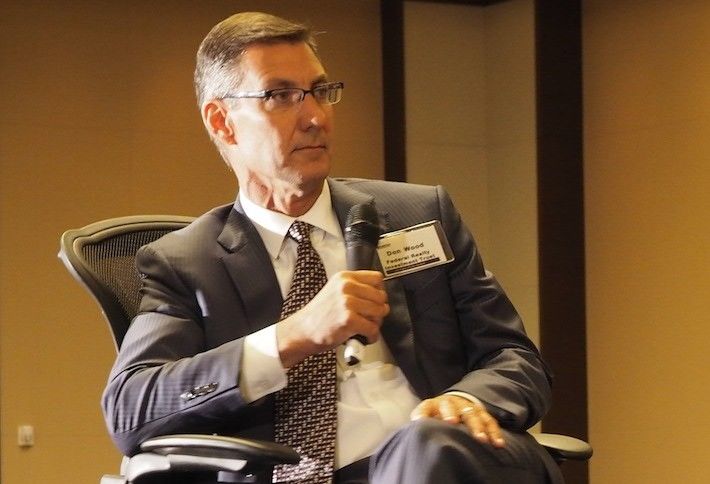 Federal Realty Investment Trust CEO Don Wood said his company has returned increased dividends to its stockholders every year since the 1970s. He took over as CEO in 2003, and used the next five years to focus his company, shedding assets that didn't fit and eliminating distractions. The company was strong enough when the recession hit that he believes "2008 and 2009 were the greatest thing that happened to our business." Jaws, meet floor. But he went on: "It made us rethink everything. The paradigm had completely shifted." Now, his company is thriving, including Assembly Row outside Boston, a mixed-use outlet center that's the first of its kind in the country. He stressed that any development nowadays needs to have top-flight retail or "you're not going to make any money up top." We're not in the age of the flying car yet, so "you've still got to enter the building on the ground floor." 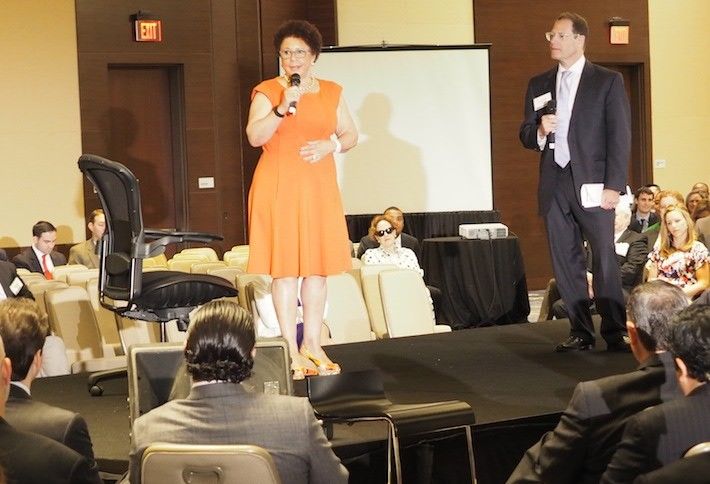 Before all the talk about how great everything is in DC, one of America's richest people took the stage to talk about those on the opposite end of the wealth spectrum. Sheila Johnson, before her keynote interview with CohnReznick's David Kessler, talked about the other side of DC's development boom: the affordable housing problem. "You are the city leaders and influencers," she told the best and brightest of DC commercial real estate. "We should be mindful of what's really going on in the city." The owner of the Washington Mystics said she had trouble finding an affordable place to live for a new coach. Someday soon, the region will need to add 149,000 units of affordable housing. "We've got to find ways for everyone to live here. It's just right, and it's also smart."