Behind the Project: How the Shooshans' Liberty Center Reinvented Ballston

The Shooshan Co is one office anchor tenant away from completing the eight-building Liberty Center that's redefined Ballston and defined John Shooshan's family business for the last 15 years. Here's how it came together. 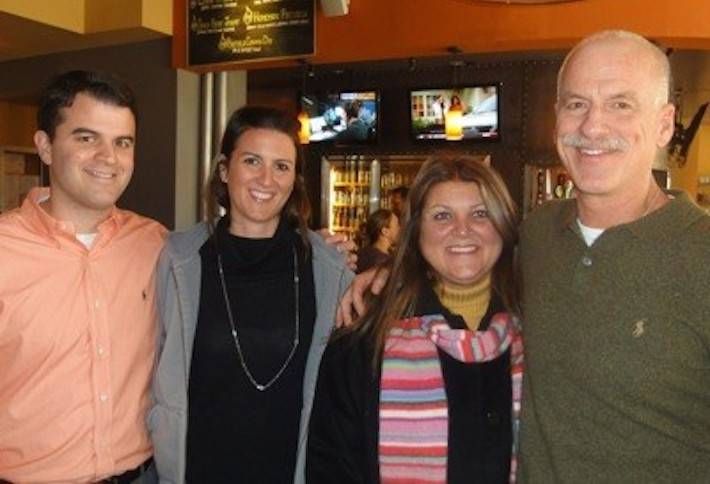 When the Office of Naval Research threatened to leave its Ballston HQ almost two decades ago, the Fred Schnider Investment Group hired John (right, snapped with son Kevin, daughter Kelly and wife Marcia) to redevelop the property. The Shooshan Co built a 13-story, 315k SF HQ for the ONR that opened in 2005, which is now known as One Liberty Center. What followed in the Liberty Center North project was density the southeast portion of Ballston had never seen: the 22-story Liberty Tower apartment building next to the 22-story Residences at Liberty Center condo building. Capping off the block was Two Liberty Center, the nine-story, 177k SF office building where TSC is HQ'd, 100% leased with BAE Systems and Strategic Analysis as tenants. All four of the buildings were on one block, between Wilson Boulevard, 9th Street N, and Quincy and Randolph streets. 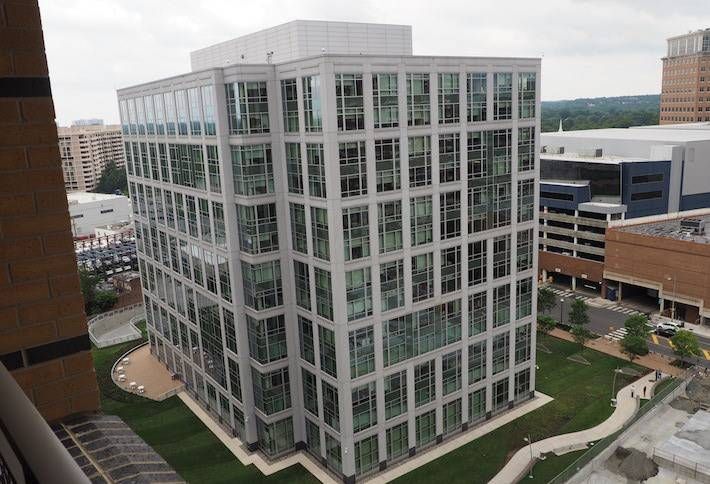 Across Wilson Boulevard, an opportunity presented itself. A WMATA bus parking lot and a Shell gas station were just sitting there, begging to be developed. So TSC bought the land, laying the groundwork for Liberty Center South. DARPA was looking to move from its 170k SF HQ at 3701 Fairfax Dr into a bigger, more secure building. Kevin Shooshan says the company’s purchase of the site was a “little bit of a leap of faith,” but TSC got approval for a building with an 80-foot setback (DARPA is the Department of Defense’s lead research arm and needs a significant security perimeter) on Randolph Street, and signed DARPA to a 15-year lease. DARPA moved into the 13-story, 355k SF building (pictured) in 2012. 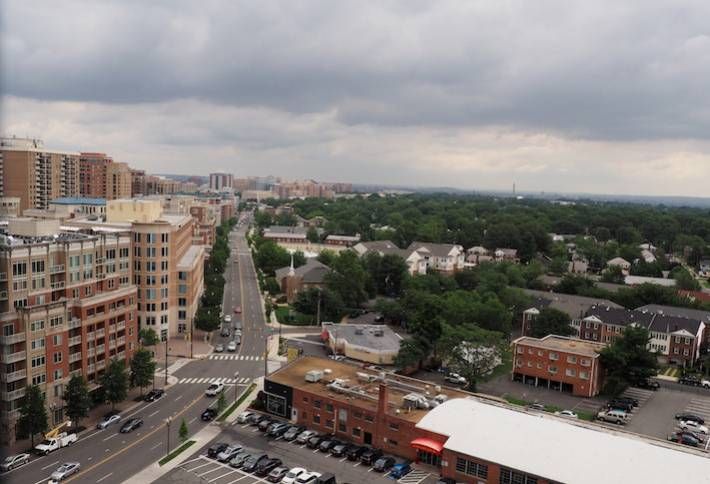 TSC sold a neighboring parcel to Donohoe Development, which built the Marriott Residence Inn on Quincy Street. Most recently, the company completed The View at 4000 Wilson Blvd, a 17-story multifamily with views of the R-B Corridor and the monuments (even on a cloudy day last week). The key to View is on the ground floor, however, where Top Chef contestant and DC restaurant mogul Mike Isabella has opened up Arlington’s first Kapnos Taverna and is opening up Pepita, a Mexican cantina, and Yona, a ramen shop with renowned Baltimore chef Jonah Kim. A Taylor Gourmet, also Arlington's first, was the building’s first retail occupant. In fact, despite landing GSA tenants to occupy a combined 670k SF of office space, the retail may be the key to the success of the whole eight-building project. 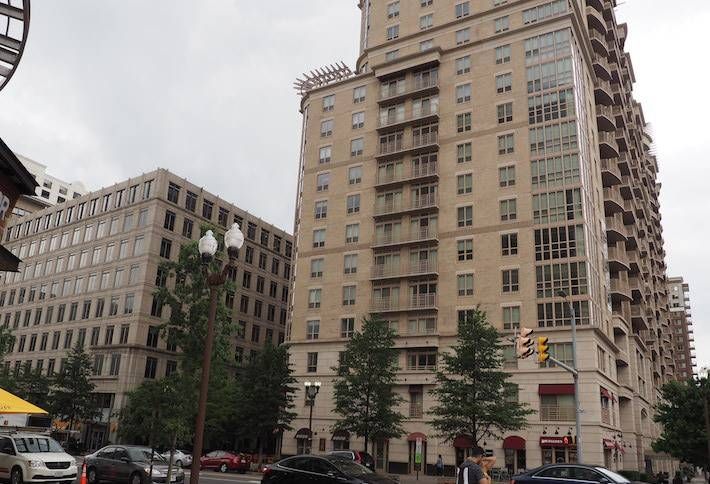 When Liberty Center North (pictured) was coming on line, Kevin tells us, they were “begging” their first tenant, Bruegger’s Bagels, to move in. When they did, Mike Babin of Neighborhood Restaurant Group noticed, and he gave the block a jolt, moving in with Rustico and Buzz Bakery in neighboring buildings. “We couldn’t get retailers to even look at it,” says Kevin, who runs leasing for TSC; Babin had “great forethought” to come to the area. Sweetgreen followed next to Rustico, and with DC restaurant powerhouses in three of the Liberty Center buildings, the final piece to the puzzle already has stellar interest. 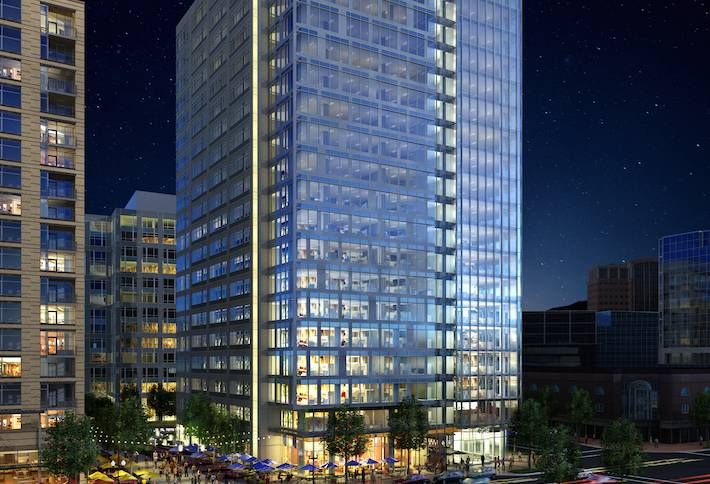 That building is 4040 Wilson, a planned 20-story, 425k SF office tower across the street from the soon-to-be-reinvigorated Ballston Mall. The parking garage for that building is already done, and construction is paused as the Shooshans search for an office anchor tenant. John says five years ago he would have expected a government contractor to fill the space, but now he’s seeking out technology and education tenants; he says they're the future of the Ballston office market. Once an office anchor signs, Kevin says, the building will deliver in 14 months. And once it’s built, it will be the culmination of a 15-year, eight-building effort, and Liberty Center will be complete. 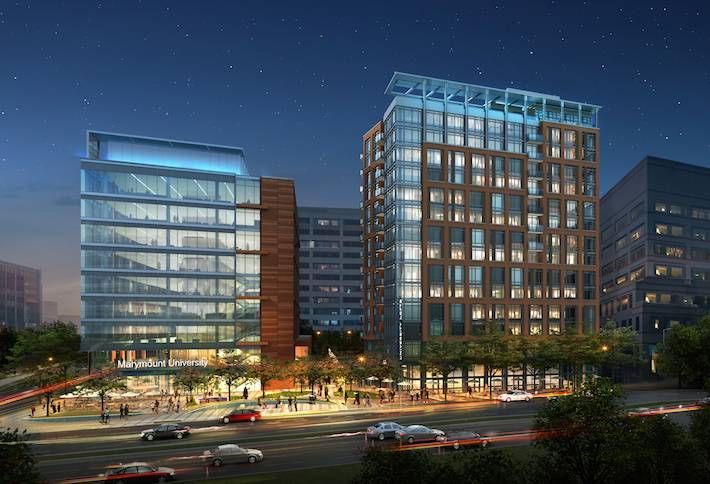 “It’s really an opportunity of a lifetime to develop something of this scale that can have an impact,” says John. That he’s built the project with his children makes it even sweeter. Now the Shooshans have turned their eyes to their next projects for the first time in more than a decade. First, just down the road at the corner of Fairfax Drive and Glebe Road, is a two-building, mixed-use project for Marymount University. The Shooshans tore down the infamous “Blue Goose” building and are replacing it with a 166k SF office building and 265-unit residential building, with a courtyard adjoining the two and underground parking. The buildings are being designed by Gensler, and the office “will probably be one of the most attractive buildings in Ballston,” he tells us. 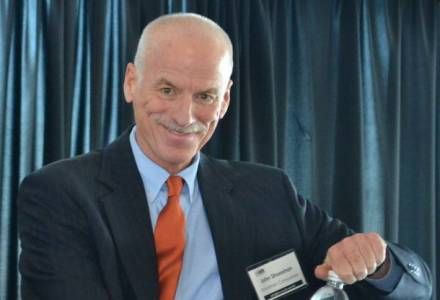 Farther east, The Shooshan Co’s first project outside of Ballston/Virginia Square will be the redevelopment of Red Top Cab’s properties in Clarendon. The large taxi storage lots will become a three-building, 600-unit mid-rise development in the hottest residential market in the county. What’s coming after that, however, is anyone’s guess. COO Kelly Shooshan has been charged with site identification, and although TSC is still bullish on Arlington, no one is ruling out a move into DC. With Liberty Center complete and an unfettered success, anything is possible for the Shooshans.