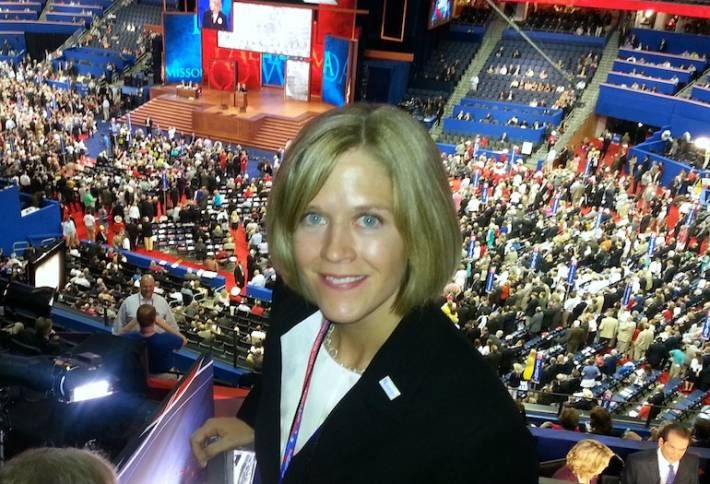 Javelin19’s Jill Homan is dedicated to changing communities. But not just through real estate. From scouring the market for development opportunities across all asset classes to helping select the site for the next Republican Party Convention, Jill is making a major impact.

After moving around growing up (including stops in Virginia and Kentucky), Jill spent her high school years in Howard County, Md. After undergrad at the University of Dayton, where she earned degrees in mechanical engineering and German, even spending time in Heidelberg, Germany, as a student, she went the political route. She joined the campaign of Chuck Ecker, the former Howard County Executive who was running for the Republican nomination for Governor of Maryland. Her efforts got her noticed by the office of then-Congressman Bob Ehrlich, and Jill soon landed a full-time job as his press secretary and legislative assistant.

She enjoyed both the policy and PR sides of her role but soon felt the need to gain more business experience to advance her career. Jill headed down to North Carolina to work in the marketing office of John Deere Corp. and was eventually promoted to managing a territory in the Minneapolis area. But looking to bolster her business chops even more, Jill decided to go back to school, at Duke as a Master of Business Administration and Master of Public Policy student.

In grad school, she became active in the Durham-Duke Neighborhood Partnership, which engages the communities near the Duke campus through economic development and education programs. She also began working part time for a local real estate development and investment firm. After giving a presentation on advising neighborhood associations to Duke’s School of Public Policy board, Jill met one of the board members, DC developer Bob Cohen, who offered her a position with his Perseus Realty back in Washington.

The real estate industry combined her interests—engaging communities and economic development—as she worked in acquisitions and project management, among other roles. But feeling an itch to go out on her own, in 2011 she teamed with Meridian Group vet Kevin Hill to raise capital for a new venture, and Javelin19 was born.

Not long after, Jill’s connections in Durham led to helping assemble three land parcels (and bringing in Education Realty Trust as a partner) for a 340-unit apartment project near Duke’s campus. (The project, called 605 West, opened in July 2014.) Javelin19 is actively on the hunt for attractive risk-adjusted opportunities in the DC metro, with an emphasis on office and residential plays.

All the while, Jill hasn’t lost her passion for politics, remaining active in the DC and national Republican Parties and even holding office as the Republican National Committeewoman for DC (one of the 168 members of the Republican National Committee). She was elected to the site selection committee of the RNC in 2014 and was one of eight voting members who made the much-talked-about selection of Cleveland as the host of the GOP’s 2016 national convention.

Being active in national politics in a voluntary capacity is a time-consuming thing, Jill notes, though she does time find to root for the Redskins (“A labor of love”) and has completed six marathons.