The annual NAIOP Northern Virginia Bus Tour is the only building tour that requires seat belts (except for when we toured Disney's Tower of Terror--though nobody wanted to lease it, for some reason). Last week, the only thing brighter than the weather was optimism for NoVa. 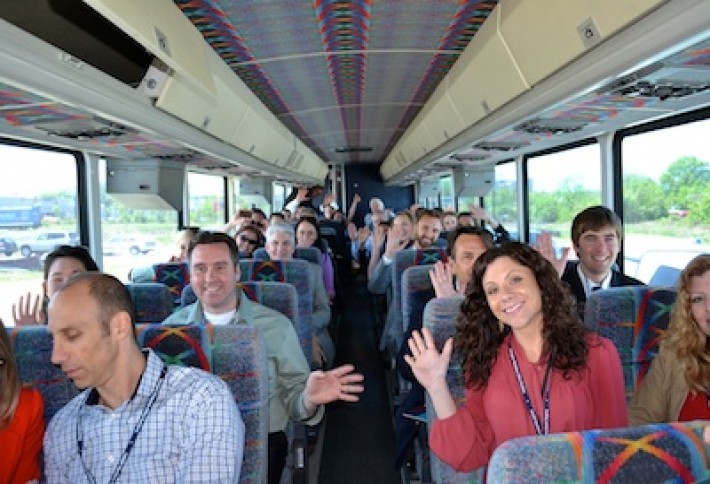 Our driver's ed instructor would be unimpressed with these manual turn signals. Left or right, people? The NAIOP caravan covered 76 miles of available office and industrial space in markets like Rosslyn, Crystal City, Alexandria, Tysons, and Springfield. For the first time in many years, the vacancy rates for office and industrial are the same inside and outside the Beltway--about 16%. Inside-the-Beltway markets were at 7% just four years ago, and overall market activity in Northern Virginia stalled in Q1, falling from 15.3% at the end of last year. 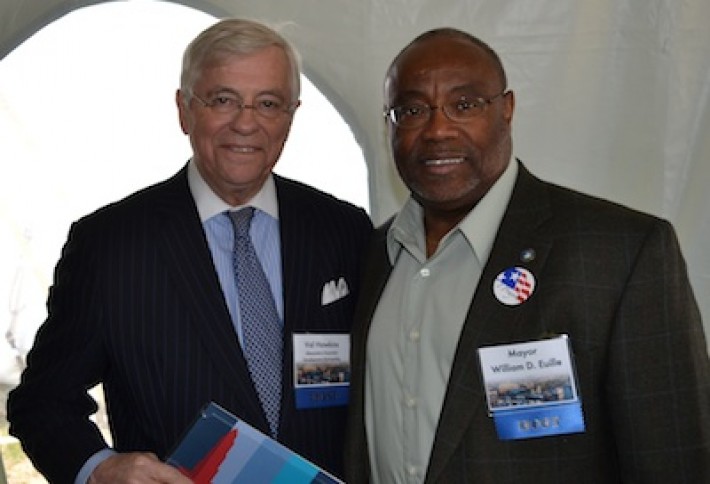 Alexandria Economic Development Partnership hosted lunch for the 460 bus riders on an empty lot in Potomac Yard. Partnership pres/CEO Val Hawkins and Alexandria mayor William Euille talked about several mixed-use redevelopment projects under way on the 295-acre former rail yard, as well as a potential Metro station. Funding for the station wouldn't come until 2014, with a possible opening in 2017. It's much more expensive to build a station on an existing line than at the end of one, according to CBRE's Marianne Swearingen, one of three tour captains on Bus 10. NAIOP recruited 30 captains equipped with a 107-page script to narrate the tour.

Nate Edwards, Curt Hoffman, and David Kelley represented Fairfax County Economic Development Authority. The county's Springfield market was one of the first featured on the five-hour tour, starting at Clarion's Metro Park and rolling by the Springfield Mall site where demolition has started on the guts of the shopping center. Vornado has plans to create a mixed-use town center that will include 1.5M SF of office. Monument also has a five-building project coming at Liberty View near the Springfield Metro that could include a hotel.

Duke Realty leasing and development VP Battista Orcino and senior leasing rep Matt Bremner chatted with Loudoun Economic Development biz dev officer Jim Herbert. Some of the office space available in Northern Virginia is due to BRAC activity, including all 79k SF at 4700 King St in the I-395 corridor. The tour also drove through Vornado's Skyline complex,where nearly 1.3M SF is available. A cool fact about Skyline: It used to be the home of Fairfax's Washington-Virginia airport.