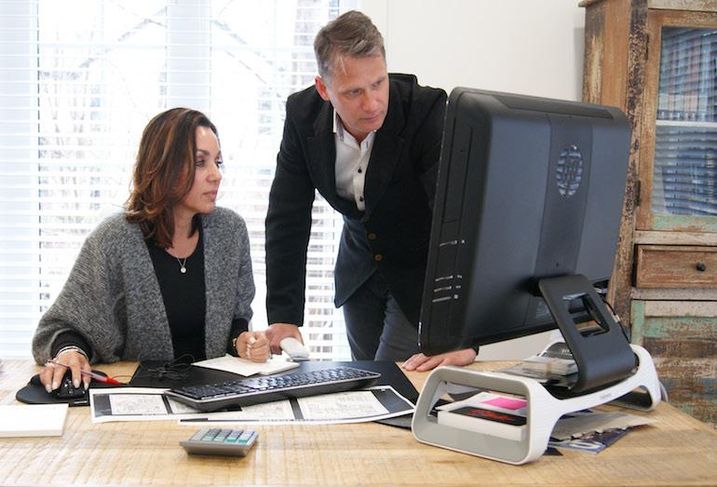 Bisnow: Talk about the work you did to refashion retail at First Canadian Place.

Marcelle Rademeyer: About five years ago we saw the trend moving toward the market getting a lot younger. Traditionally, people were focused on the fact that the downtown market was more 40-plus. So we started strategizing by looking at the spaces we had coming up (for re-lease) and figuring out how to create a buzz and vibe that would resonate with that much younger demographic. Now more than 50% of the downtown demographic is under 35. So as the market became a lot younger, we were well-prepared.

At First Canadian Place, the idea was to reconfigure and amalgamate spaces to create the footprint required to change the environment, versus just getting someone to fill the space. We create a vision, we don’t hit and run. A good example is Cactus Club Cafe. We had to sit on some month-to-month vacancies for a while in order to amalgamate those spaces into the footprint you see today. And the redevelopment of the food court (Maman from New York replaced Szechuan Szechuan, and IQ Food and Greenhouse Juice were added) couldn’t have happened if we didn’t keep some tenants on short-term leases.

Jean-Francois Nault: So now when you walk upstairs at FCP, you turn left and see this healthy and peaceful island, a little oasis with an outdoor patio that’s been created at the food court level. You’re away from the hustle and bustle of a fast-paced food court, so if you want a more relaxing lunch with quality food in a cool environment, there’s a place for you to go. But we have to de-lease the property to be able to re-lease and tweak some areas to create the vision. We’re doing something similar at Manulife Centre and at Queen’s Quay Terminal (which now boasts an expanded Sobeys). 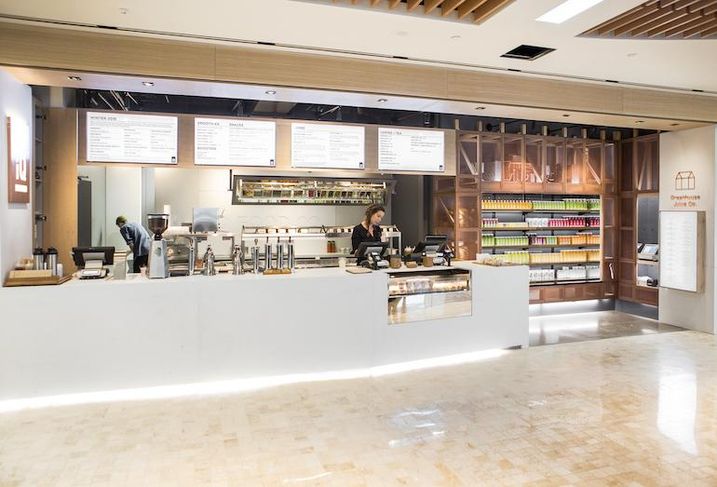 Above is IQ Food and Greenhouse Juice, side-by-side in one stall at First Canadian Place's food court. “We’re looking at more creative ideas," says Marcelle, "like can we get tenants that work well together to share a space?” (enabling hip indie retailers to mix with national tenants).

Bisnow: You’re the creative minds behind Union Station's retail redevelopment, which has a "taste of Toronto" theme. What was your approach here?

Marcelle Rademeyer: We realized that retail is often just an afterthought downtown. Around Union Station there are all the condo dwellers, and the financial core has moved south, but for all those people south of Front there hasn’t been a heck of a lot in terms of retail—so they either go to Toronto Eaton Centre or Queen Street. So we said let’s not make this cookie-cutter retail you’d find in a shopping centre. Let’s create an environment that’s appealing not only to people commuting—the 250,000 you get at Union a day—but also to condo and office dwellers. We’re trying to hit every segment of the market by curating the place.

Jean-Francois Nault: The vision was to bring the city inside the station. The spaces aren’t that big, so we separated every part of the station into neighbourhoods. Like the Front Street Promenade, an old heritage-inspired area where we’ll curate about 15 to 18 independent retailers you’d find on College, King or in Kensington. Keep walking and you arrive in an area with fast-casual restaurants, but local Toronto fast-casual. And we’ll have a food court, but with a twist: it'll include strong Toronto independents who can sustain the pace of a food court. Then turn left and you arrive in a big fresh market (below), instead of giving 30k SF to a grocery store. 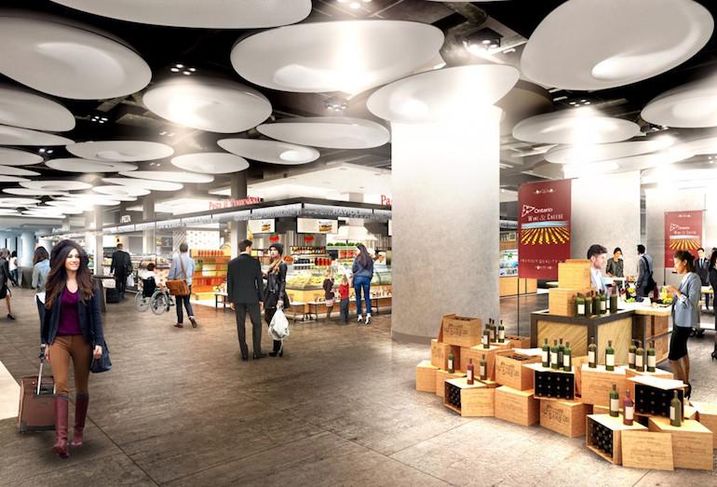 Jean-Francois Nault: At the end of the day you want something that commuters will love. And we have them, they’re walking through the station every day. But we also want to attract residents—there are 30,000 doors one kilometre from Union. If you live in Ossington or Leslieville, you should feel at some point, "I’m going to go to Union Station, I hear the market is pretty cool." Or, "Let’s grab a beer and I can get my hair cut at the same time." So it doesn’t have to be just for the condos around Union. It becomes a tourist attraction for the city—one of the coolest places to visit in Toronto.

Bisnow: Speaking of afterthought retail, what about condo projects, where this often seems to be the case?

Jean-Francois Nault: We’re actually getting many condo developers calling us and telling us they’re tired of having a pizza place or drugstore at the bottom of their towers. They’re understanding now that they can create a certain type of lifestyle—maybe with a barber shop or a cool café—and in return that’s going to help them to sell their condos to the exact crowd they’re looking to live above. Traditionally developers would rather have a drugstore or dollar store, for covenant purposes for the bank, but as they go to sell condos they realize maybe they can’t sell everything because people don’t want to live above a dollar store.

Marcelle Rademeyer: Plus it’s not just Millennials moving downtown, but older generations too, because they want the lifestyle. And like the Millennials, they want to live in a cool neighbourhood and go downstairs in their building to a cool coffee shop or wine bar, or be able to get their hair done. So it’s kind of a throwback to what was happening years ago when people lived and worked in the same areas. And it’s fast gaining traction in Toronto, and condo as well as office developers are getting it. They’re astute now at knowing who their customer base is and that it’s changed dramatically in the last decade.