Brokers of the Year!

Congrats to Avison Youngâ€™s Robert Armstrong and Colliers'Â Colin Alves, dubbed by SIOR last night as the respective 2013 office and industrial brokers of the year. (It's like winning an Oscar, except you don't get hounded by paparazzi... except for Bisnow.) 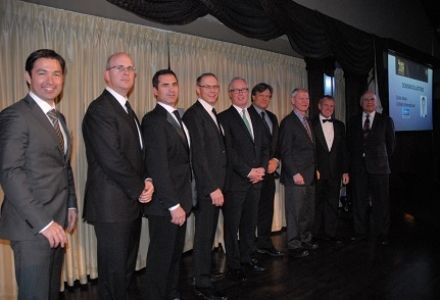 Ever seen so many presidents snapped in one photo? (Even the US could only find five.) Here, at the Palais Royale, are SIOR past presidents Matt D'Orsay, Kevin Beaudry, Joe Almeida, Rob Renaud, David Colley, Clyde Hencher, Peter Scholz, Lawrence D'Orsay, and Phil Nanavati. The awards--selected by a committee of industry experts--recognize outstanding performance and dedication, and judging is based on the candidate's reputation in the industry, and the size, value, and volume of the transactions. Colliers' Scott Addison emceed. 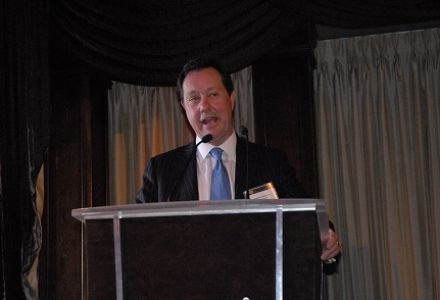 While Rob and Colin's field accomplishments caught everyone's eye, they says it's their "off-the-field" ones that are at the core of their biz success. For Rob, it's family life that grounds him. Yesterday, before the ceremony, he was at his five-year-old son Christian's and eight-year-old daughter Abigail's Christmas concert at their school, Kenolle, in Port Credit. (We'd rather hear kids sing Christmas songs than Roseanne Barr or David Hasselhoff.) 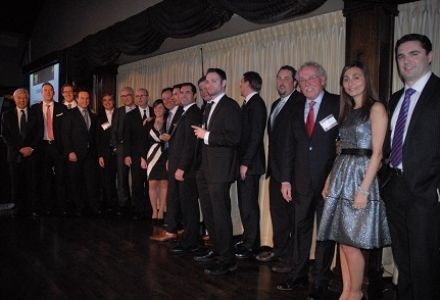 The AY team joins Rob in celebrating his award. He's also coached his six kids in sports (as well as played hockey and golf himself). His five-year-old has just started house league hockey. He was recognized for several game-changing transactions last night--16 deals in total for 2013--but the one he's most proud of is the 15-year early lease extension for law firm Stikeman Elliott. 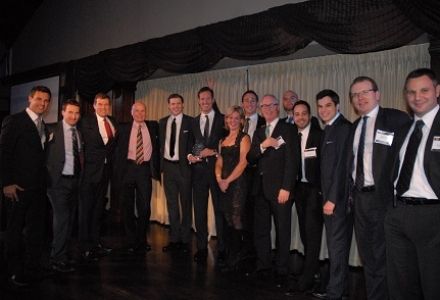 Colin (joined by his Colliers colleagues) points to the early summer, $19.4M sale of the Brownridge Road asset in Halton Hills to KingSett Capital as the deal he's most proud of this year. "It's just great to be recognized by your peers," he tells us. "I have grown with these people in the industry." Both men say it's not so much about the deals or the money, it's the relationships one builds that allows for longevity in the business. (If you do enough real estate deals, you never have an empty foursome on the golf course.) 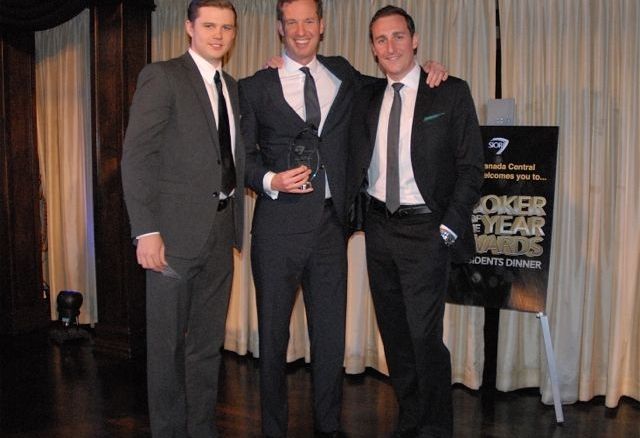 At the end of the day, it's not an easy business, Colin (with Colliers' Michael Law and Peter Garrigan) says. "You get beat up, ground down on things, so you rely on these people you have got to know." Outside of work, Colin enjoys mountain climbing—he and his wife scaled Africa's Mount Kilimanjaro—and he's a big supporter of local charities like Princess Margaret Cancer Centre, Habitat for Humanity, and Ronald McDonald House.