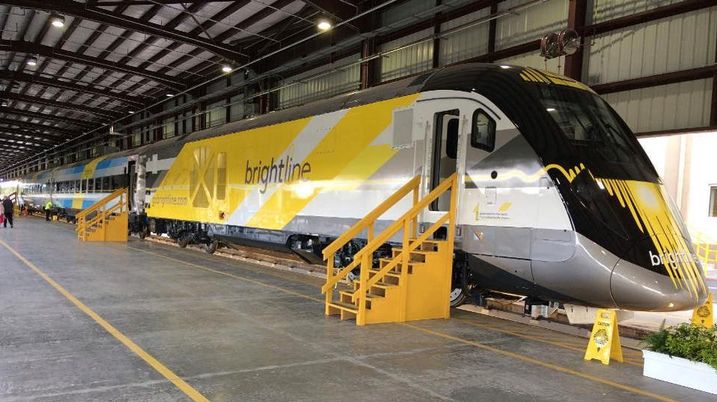 Last Wednesday, most of us were either cooking turkeys or traveling to go eat said turkeys. So you would be forgiven for missing Brightline's tweet announcing that it hopes to begin limited service next month.

Brightline announced it has been ticking off items on a checklist and testing trains, and is gunning for a December launch. But the announcement came with a caveat: “We haven't announced a date because our opening hinges on a variety of moving parts and pieces in this monumental infrastructure project.”

Florida's first and only private passenger rail service has been in the works for five years. Brightline's Miami-West Palm Beach service is expected to begin first, with further service to Orlando beginning in 2020 and service to additional cities after that.

Brightline has said that its trains will take 3 million cars off the road. Ticket prices have not yet been announced, but rumors have suggested that a one-way trip between Miami and West Palm Beach will cost $12.

In the past few months, Brightline has been testing its trains, but not without incident. In October, the Federal Railroad Administration revealed back in February that a train had derailed while going 4 mph, causing $400K of damage and raising safety concerns. In the first week of November, a woman was killed on the tracks around 7 one morning.

Residents living near tracks have complained about noise, though Brightline said a "quiet zone" will be implemented between Miami and West Palm Beach once service begins.

The trains have faced the toughest opposition from critics along the Treasure Coast, who fear that residents of Martin and St. Lucie counties — where the trains will pass through but not stop — will be negatively impacted with traffic and congestion. One group of activists in October discovered documents showing that Brightline filed federal plans to transport liquid natural gas, a hazard. That led to one Brightline representative admitting that the company had moved “a couple” of liquid natural gas shipments in South Florida.

Critics have pushed for state legislation, in the form of the High Speed Rail Safety Act, that would create more oversight of the trains by the Department of Transportation. The bill passed the state Senate's transportation committee this month.

Regardless, Brightline has charged ahead. Last week, it cleared a regulatory hurdle when it was awarded an environmental permit by the South Florida Water Management District.