Gulfstream Park, a horse racing track and casino just north of Miami in Hallandale Beach, Florida, underwent a $130M renovation 15 years ago, with an update of its racing and casino facilities and the development of a luxury shopping center component.

But a recent spate of retail closings at the complex, plus a legal battle between its owners and the waning popularity of horse racing, raise questions about the future of the property. 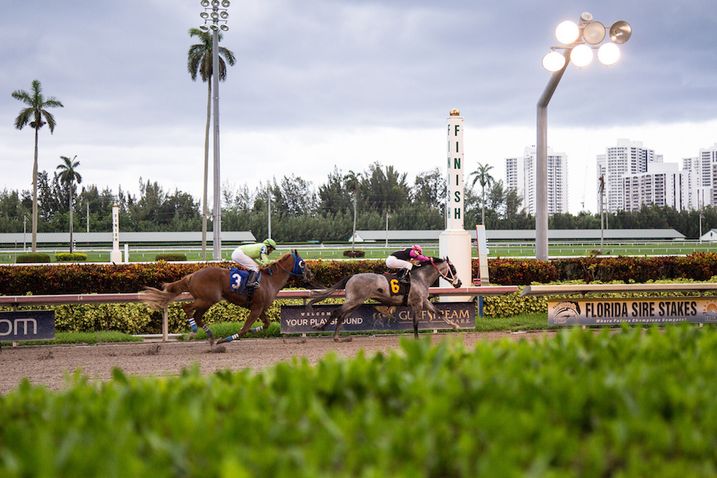 Billionaire Frank Stronach, who grew up in Austria under Nazi rule, emigrated to Canada and made a fortune founding Magna, an auto parts manufacturer. He branched into real estate, cattle ranching and horse racing, eventually buying up six racetracks in Florida, Maryland and California. In 1999, his Magna Entertainment Corp. paid $95M to buy Gulfstream Park.

In 2004, Gulfstream Park's run-down track was updated and a high-end, Mediterranean-style shopping complex built up around it, complete with a Crate & Barrel, a Container Store and restaurants. Seeking to draw more spectators to horse racing, organizers founded the Pegasus Cup, an annual race with a $9M purse, and hired top-dollar musical guests like Post Malone and Mark Ronson to perform. Stronach himself commissioned a bewildering, 110-foot-tall statue of a pegasus battling a dragon at the entrance to the property.

While turnout has been strong for special events, the property has struggled to draw regular crowds. Several retailers at the complex have closed, the Sun-Sentinel reported last week: Cantina Laredo, III Forks, Rok:Brgr, Adena Steakhouse and a Charming Charlie.

Gulfstream reps told the newspaper that the closures are “part of a re-merchandising" effort, which includes a $17M clubhouse refurbishment.

The Stronach Group did not respond to messages seeking comment Monday and Tuesday. 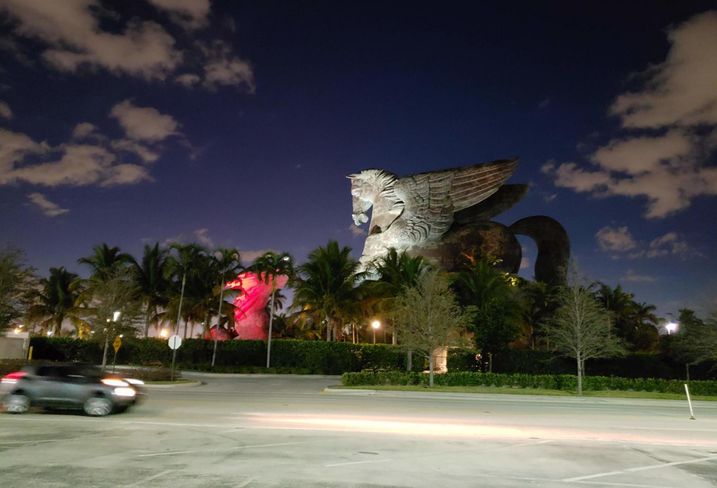 Osseous via Flickr Creative Commons
Gulfstream Park features a statue of a pegasus slaying a dragon.

While Gulfstream tries to navigate the uncertain waters of retail in 2019, the Stronach family is involved in a sprawling legal family feud.

The Stronach Group had over the years grown into a web of 253 corporations and trusts. Frank Stronach's ventures included a 300-acre thoroughbred training center in Boynton Beach, a 95,000-acre organic beef cattle ranch in Ocala, a golf and country club there, and investments in an electric bike company and an energy drink. He also built a holistic housing project for hundreds of survivors of Hurricane Katrina, where they could live rent-free for five years, learn skills, and farm and ranch, selling food to restaurants at Gulfstream Park.

In 2013, Stronach ran for office in Austria. He resigned his corporate positions at the Stronach Group, and left day-to-day operations to his daughter, Belinda, and a CEO, Alon Ossip.

But when Frank Stronach returned his attentions to North America a few years later, he disliked the direction Belinda was taking the businesses. He and his wife, Elfriede, sued their daughter, her two children ond Ossip in Ontario for $520M Canadian ($386M U.S.), and accused her of mismanagement and excessive spending. Belinda's brother sued her separately.

Belinda Stronach countersued, claiming her father’s "fanciful" ventures were straying from the core business, and that he had used funds for his Austrian campaign and tax liabilities there.

She said the pegasus statue, plus a replica of it that is stored in China, had together cost $55M. Frank Stronach's investments in golf courses, restaurants and farming resulted in a net loss of $380M, her side has claimed. Under she and Ossip's leadership, revenues had increased from $600M in 2013 to $1.1B in 2017, their team has said.

The Stronach family has significant real estate holdings in hot markets. In Hallandale Beach, the median price for homes over $1M rose 47% in a year, The Wall Street Journal reported.

Aware of the development pressure, Frank Stronach has spoken of his desire to preserve the racetracks, lest the sport die out and the land be sold off. He has called for converting the tracks into trusts and letting breeders and trainers lease and operate them. Belinda has retorted that her father wants to give away family assets.

A plan to build condos at Gulfstream Park was scrapped in 2015. Last year, the 420-acre Adena Golf and Country Club near Ocala, built by Frank Stronach, was abruptly closed and put up for sale. Frank this spring filed a lawsuit to stop the sale until the Ontario suit is resolved. Litigation could take years to unwind.

On top of all that, a string of public deaths of racehorses has not been good for the racing industry. This season, 29 horses have died at the Stronaches' course in Santa Anita, California, resulting in protests, track closures and a reckoning about the future of the industry, which has long been in decline.

A rep for Frank Stronach said he was too busy to comment.