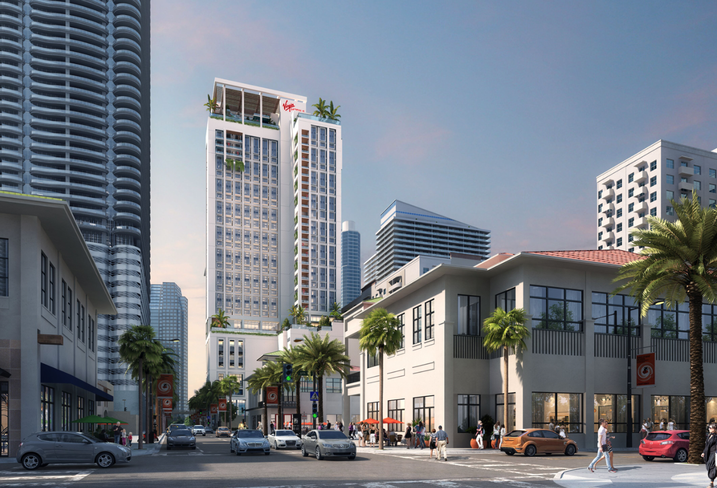 Courtesy of Virgin Hotels
A rendering of a Virgin Hotel in Miami's Brickell neighborhood.

The 40-story hotel will be developed with Blue Jay Capital, a South Florida private equity firm, and include 15 floors of furnished residential spaces in 150 micro and co-living units.

“We’re really excited to be here. I’m a local and I’ve run hotels here and owned hotels in Miami, so I’m just thrilled to be here,” Virgin Hotels CEO Raul Leal told AFAR. “From the very beginning, we had about 10 target markets in the U.S., and Miami was right there at the very top of that list. It’s taken us a little longer, we just wanted to find the right location. Given the fact that Virgin Voyages and Virgin Trains [are based in Miami] and Virgin Atlantic flies in here — this is just the latest addition.”

Virgin is developing quite the footprint in Florida, where the Virgin Voyages cruise line is set to have its first sailing in April. The Brightline train, which currently operates trains between Miami and West Palm Beach and is expanding to Orlando, is being rebranded as Virgin Trains USA.

The hotel property, at 1040 South Miami Ave., will replace several low-rise buildings. It is slated to include a car elevator, a spa, 15K SF of event space, the Commons Club restaurant/bar, a Funny Library Coffee Shop and a three-story terraced rooftop with a pool.

The resi component will include micro-units under 400 SF and three- to four-bedroom co-living units. It will be the first time that Virgin Hotels includes a residential aspect.

Virgin Hotels have a "no nickel-and-diming" policy, which means there are no resort fees, urban fees or amenity fees, WiFi is free and minibar snacks are street-priced.