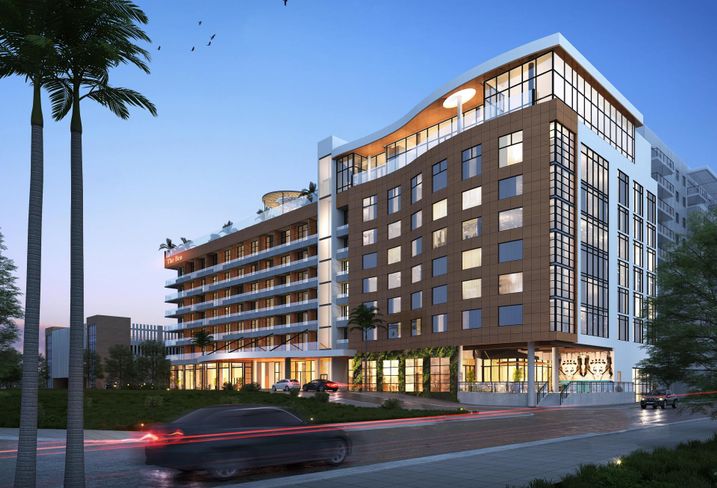 Courtesy of The Ben
The Ben is a 208-room hotel that will open in downtown West Palm Beach.

South Florida's development was triggered by magnate Henry Flagler, who built grand hotels, then bought and modernized rail lines that would drop well-off northerners at his lobby doors.

Developers Navarro Lowrey, Concord Hospitality and Woodfield Investments have a modern version of that vision. They have been developing a former City Hall site into the $145M Flagler Banyan Square mixed-use project. It will include a 208-room boutique hotel called The Ben — a Marriott Autograph Collection property — plus 251 luxury apartments, 34K SF of retail and Class-A office space.

Bernardo Neto, previously the executive director of hotel operations for the luxury property Park MGM in Las Vegas, where he oversaw a $550M rebrand, will serve as general manager.

The waterfront hotel, on the corner of North Narcissus Avenue and Banyan Boulevard, will have ballrooms, meeting space and two restaurants, including a rooftop eatery and bar that hotel officials hope will become a social gathering spot for locals and travelers.

The hotel will have a whimsical vibe; it is modeled after the Ben Trovato Estate, the home of settlers from the early 1900s. Ben Trovato translates to "well found" in Italian, and it is part of a phrase that means "even if it's not true, it's a good story."

The Flagler Banyan Square project is being built on the former City Hall site. It is just one in a slew of new hotels, office towers and residential projects rising in downtown West Palm Beach, which has seen continued growth in visitors over the last decade. The city sold the 3.5-acre site in 2018 for $11.5M.

"Our approach to service will be unpretentious and comfortable, yet elevated with touches of luxury," Neto told Bisnow.

He said the West Palm Beach area is thriving with nightlife and restaurants, and a curbless street project that is concluding this summer. After living around the world, he wanted to return to South Florida, which he called "paradise" for its "clean and active lifestyle," to raise his two daughters.