Florida, Tribes Among The Latest To Get Federal OK For Hemp Production

The Miccosukee Tribe of Indians, which controls more than 270,000 acres in and around the Florida Everglades, has won a key approval from the U.S. Department of Agriculture that opens the door to hemp production on tribal lands. 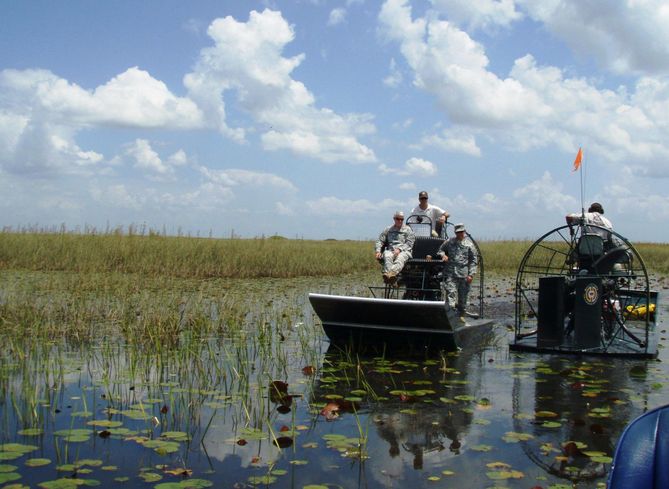 JaxStrong via Flickr Creative Commons
The Miccosukee Tribe of Florida hosted an airboat tour through a water conservation area that abuts tribal lands.

Hemp was traditionally used to make rope, sails, flags, oils and foods. But it is derived from cannabis, the same plant as marijuana, and its production was outlawed in the U.S. in 1937. Later it was deemed a Schedule I substance and controlled by the Drug Enforcement Administration. Hemp has only 0.03% of the psychoactive compound THC compared to marijuana's 10% or more.

The 2018 Farm Bill removed hemp from the definition of marijuana under the Controlled Substances Act. Now, states and tribes that want to allow hemp businesses must apply through the USDA, agreeing to regulate hemp production and sales in their jurisdictions.

"I cannot overstate how significant of a policy sea change this has been," said Dr. Amy Abernethy, principal deputy commissioner of the Food and Drug Administration, in testimony to Congress last year. The change in the Farm Bill led to producers flooding the market with oils and food products containing CBD — a compound made from the cannabis plant, whose effects on humans are often hotly debated.

On May 7, the USDA approved hemp production plans for five tribes, including the Miccosukee, and the state of Massachusetts. Twenty-five tribes and 17 states nationwide have now been approved, according to Native Business magazine.

The state of Florida won approval in April. Agriculture Commissioner Nikki Fried will oversee Florida’s state hemp program through the Florida Department of Agriculture and Consumer Services. Fried predicted the new industry would create billions in economic opportunity for Florida — the state's climate allows for hemp production year-round, according to Hemp Grower.

In the 1800s, indigenous people living on the peninsula that later became Florida were forcibly relocated westward along the Trail of Tears, but about 100 of them hid in the Everglades. Some of their descendants in the 1960s sought recognition as a sovereign country and became the Miccosukee Tribe of Indians of Florida. This legally established their status as a "sovereign, domestic dependent nation" within the U.S. Today, the tribe has more than 600 members.

Tribe Chairman Billy Cypress wrote that the tribe's USDA application, signaled its "formal intention to engage in the hemp business" and that the tribe "boasts a land mass sufficient for any proposed hemp endeavor."

The application says the tribe would open certain lands within its jurisdiction for cultivation, processing and distribution of hemp and designate a hemp control officer to issue licenses and comply with laws.

An attorney for the tribe said the group declined to comment, saying it is preoccupied with coronavirus-related matters. On parcels throughout South Florida, the Miccosukee tribe operates a gaming facility and hotel, a service station, a golf and country club, an Indian Village tourist attraction and museum, airboat rides and more. Some predict that cannabis industries could supplant casinos as key sources of revenue for tribes in the coming years.