Eduardo Egea remembers when he got the drone that would inspire his latest architectural creation.

Egea’s father, who was in his late 70s and has dementia, piped up one day a few years ago.

"'I want a drone,'" Egea remembers his father saying. "They have a drone for sale at Walmart, and you have to get it for me.’ I bought him the drone. He couldn’t figure it out. He put it back in the box and said, ‘There. A present for you.’ I got stuck with this drone.” 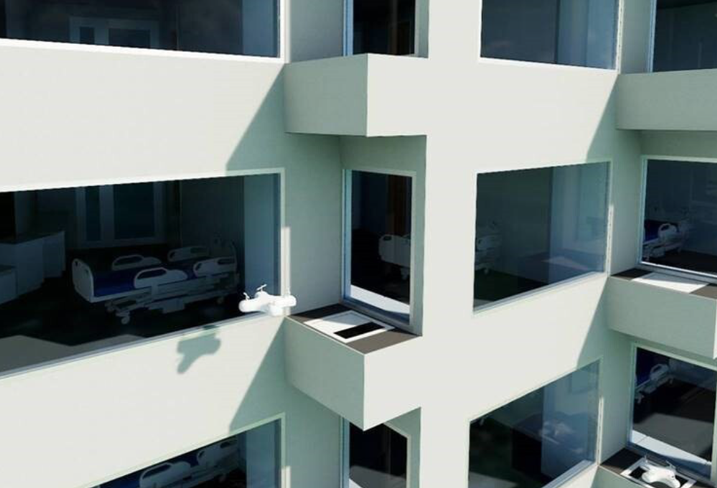 Courtesy of Leo A Daly
In Leo A Daly's renderings, a drone approaches a patient room to deliver medicine or food.

To this day, Egea doesn't know how to fly the drone without crashing it. But the architect, who is vice president and managing principal of Leo A Daly’s Miami design studio, has invented a drone-powered hospital. If certain last-mile pharmacy, food service and storage functions were moved off-site and handled via drones, a standard hospital could reduce its footprint by 15% to 17%, he says.

Egea grew up in Puerto Rico and studied architecture at Clemson. When his mom was diagnosed with cancer, he decided to get a master’s degree in architecture and health, thinking he could help patients like her through design. Fast forward to 2017 — by which time Egea had designed medical facilities around the world — when Hurricane Maria hit Puerto Rico.

Power was out and roads were impassable. Supplies at the port couldn’t be distributed — not even medicine that was destined for hospitals. Egea worried about his parents, then 78 and 79. What if they had an emergency?

Egea has been designing hospitals for 25 years, and knows that the bulk of any hospital’s budget consists of the reimbursement it gets from insurance companies for patient care it provides. Because hospitals in Puerto Rico are reimbursed at a lower rate than hospitals in the mainland U.S., he already knew to design in creative ways that stretched available dollars.

But for all his experience, Egea wasn’t quite prepared for Hurricane Maria.

“Puerto Rico is seismic. We follow structural design guidelines to make sure a hospital would stay upright after an earthquake and can tolerate wind loads so the exterior does not get impacted by flying debris," Egea said. "There’s always more than one source of electrical power — a power line will feed from two sources, in case one goes down, or we incorporate generators. But it had not occurred to me that the roads would be destroyed, trees would be blocking the way and workers couldn’t get to work.

"Well, there’s a drone here and it’s in a box. My mind started going.” 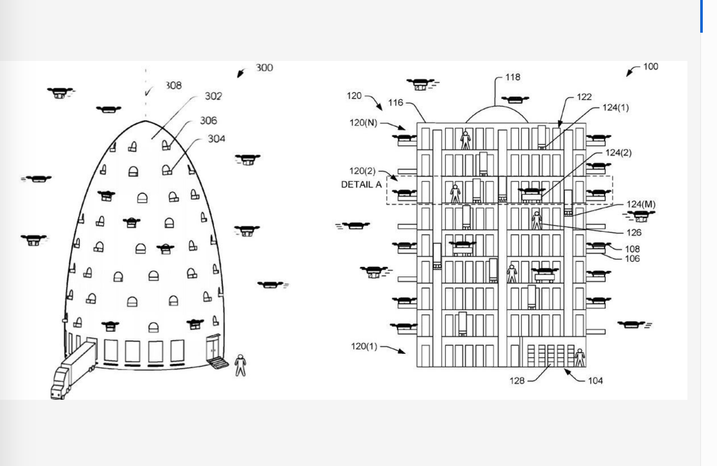 Months prior, Amazon had purchased Whole Foods. Egea was inspired by one of the company’s ideas: a centralized distribution center that looks like a beehive, from which drones could fly across a city making deliveries.

“That’s smart, but that’s dumb at the same time," he thought. "How will someone receive that package if I live in a high-rise? In a single-family home, that drone can land in my backyard, but what if I am in a condo? Is it going to land on my balcony? Does the balcony have the right dimensions?”

Meanwhile, Egea’s team had been designing flexible patient rooms that could be used for all levels of care: acute, intermediate and intensive. Making such a room universal would help lower costs of construction. 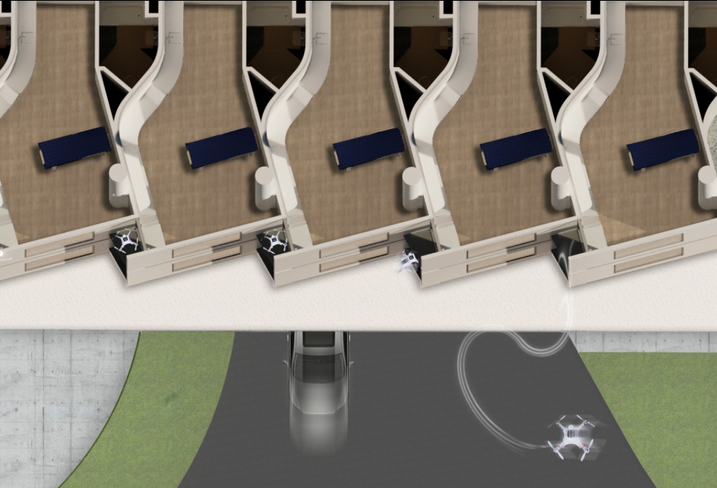 Courtesy of Leo A Daly
An aerial view shows how a drone-powered hospital would be laid out.

He thought about adding a little drone port on an exterior wall that would allow for someone to deliver medicine or food directly to the patient.

"That would bypass the need for a centralized kitchen in a hospital, a centralized pharmacy," he thought. "I would liberate and empower the patient to have a completely different experience.”

He imagined patients using apps to order off their own doctor-approved menus rather than waiting for an overworked nurse to bring trays of red Jell-O. He started sketching.

Egea's team spent about three days brainstorming and creating renderings for their drone-powered hospitals. Patient rooms would have a drone port — basically, a valve — at the outer wall. Outside, a drone would drop its load into a net. The cargo would then slide through the valve, which keeps out moisture and dirt, into a cabinet in the patient’s room.

Cost would depend on factors such as room sizes and number of beds. But Egea thinks that savings from this nimble hospital model could be used to build more, smaller facilities in rural areas.

Egea hasn’t had any discussions with Amazon, and he concedes that there are still details to be worked out. Infection control is always a top concern for hospitals, and he has thought about people who might shoot down the drones to steal cargo. “It could have a bulletproof casing, and a lock with a specific combination.”

For now, it has been a fun thought exercise. His other current work includes redesigning birthing rooms at Mount Sinai and adding gardens — a "farmacy" — in buildings for Baptist Health South Florida.