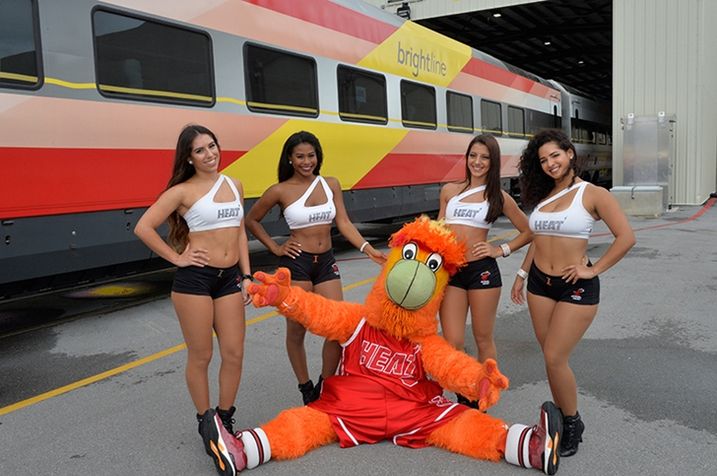 Courtesy of Brightline
Brightline recently became the official train of the Miami Heat.

The privately funded Brightline train debuted in South Florida in January, to great fanfare that included Miami Heat dancers and a mojito bar. So far, Brightline trains have killed half a dozen people who were crossing its tracks — but that is probably not the service's biggest problem.

The deaths were chalked up to careless or suicidal people crossing the tracks and addressed with a public safety campaign. Meanwhile, a federal lawsuit and a daunting financial situation cloud the train's future.

Indian River County Commissioner Bob Solari told the Florida Bulldog that the train service — which currently runs between Miami and West Palm Beach and is planned to extend to Orlando — could run out of money in six months if it is not allowed or able to raise $1.15B through private activity bonds. It needs the money to build track and extend to Orlando.

Brightline has already raised $600M through bonds, but a lawsuit filed against the U.S. Department of Transportation and the Federal Railroad Administration could prevent Brightline from raising the additional billion-plus dollars it seeks.

“They only have $59K in unrestricted cash and their restricted cash barely equals their current liabilities,” Solari said after reviewing the company's financials. "It appears that they badly need the second bond issue within the next six months."

According to the Florida Bulldog, Brightline had predicted a $20M profit for the year, but an unaudited financial statement shows that it lost $28.2M in Q1. Brightline reported moving 75,000 total passengers and collecting $663,667 in ticket revenue during that time frame.

A Brightline representative told the Bulldog that revenues did not match projections because service did not extend to Miami until May. She said the company does not comment on current litigation.

Skeptics have long wondered how the train could turn a profit. Amtrak, which is highly subsidized, offers service to Orlando for about $45 each way, on one train each day. Brightline's first round of bonds were deemed as "non-investment grade" by rating agency Fitch, partly because it predicted it would take four years to stabilize ridership. Numerous major development projects in downtown Miami could also boost demand.

Indian River and Martin counties — which lie between West Palm and Orlando, where trains would not stop but would tie up traffic when passing — filed the federal lawsuit and argue that the project does not meet certain requirements to qualify for the bond offering: that it was not approved by the counties, as required by the Internal Revenue Code, and that it violates aspects of the National Environmental Policy Act.

As the suit has dragged on, Brightline funding was threatened when it failed to meet a June deadline to offer the additional bonds. Members of Congress debated whether Brightline had rightly met requirements as a "surface transportation project" — usually reserved for roads — to qualify to offer the bonds in the first place. But the company was given a seven-month extension, until the end of this year, to sell them. The company is also reportedly exploring other means of financing. That could include a $1.75B federal Railroad Rehabilitation & Improvement Financing loan.

Brightline is also facing an end-of-year deadline to install multimillion-dollar "positive train control" technology that prevents derailments and collisions. There are also more conflicts about whether the company or taxpayers will pay for needed upgrades and maintenance of train crossings.

Brightline has pressed ahead despite its challenges. It is adding additional trains to its schedule in August, bringing its runs to 16 round trips per day, priced from $10 to $30 per leg. The company has said that ridership exceeded expectations, though an analysis by the Palm Beach Post found that trains were only about 20% full. In June, it announced plans for expanding to Tampa, a move supported by Gov. Rick Scott, and company execs have expressed hopes for establishing similar rail projects in other states.

Throughout all of this, the ownership structure has changed: Last year, Grupo Mexico bought the FEC Railway, which owns the tracks, and Japanese conglomerate SoftBank bought Fortress Investment Group, which owns Florida East Coast Industries, which controls its subsidiary All Aboard Florida, which operates Brightline.