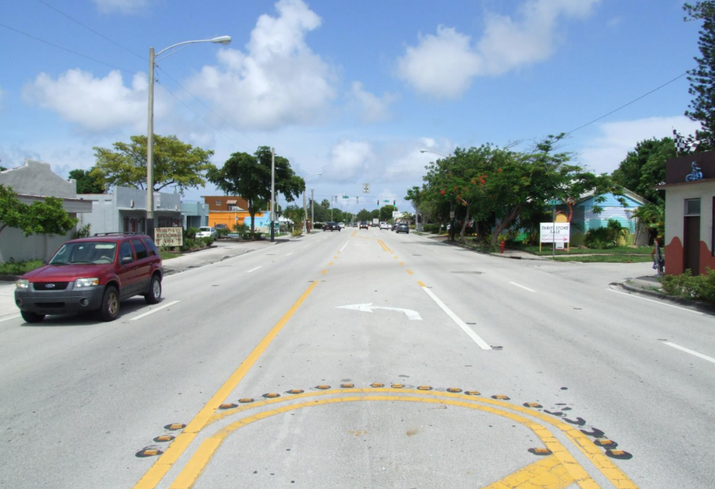 Fired up, he began a yearslong initiative to transform his neighborhood. Smith brought attention to one key corridor, where the city eventually narrowed and beautified streets and welcomed pedestrians and retail.

“Now, if you see someone walking down the street, it’s for the stores, and if they’re running, it’s for their health," Smith said.

The process wasn't quick or easy. First, Smith won a seat on the city commission, where he got the ball rolling to establish a Community Redevelopment Agency to benefit his area. The CRA, which didn’t get established until 2012, after Smith left office, and another neighborhood group, the Central City Alliance, focused on an unremarkable half-mile corridor along 13th Street in Fort Lauderdale that was not being used for much of anything except a cut-through for speeding commuters to dodge traffic on main thoroughfares.

With a $2.5M CRA grant, neighborhood leaders decided they would beautify the stretch, make it pedestrian-friendly and lure businesses.

Perhaps most remarkably, even though retailers often want high-traffic locations, the planners decided that here, they would cut, rather than add, a road lane, making it a Complete Streets project. That decision has been crucial to attracting businesses, Smith said. Savvy investors took notice and began to snatch up real estate in the corridor, and “Johnny-come-latelys followed,” he said. 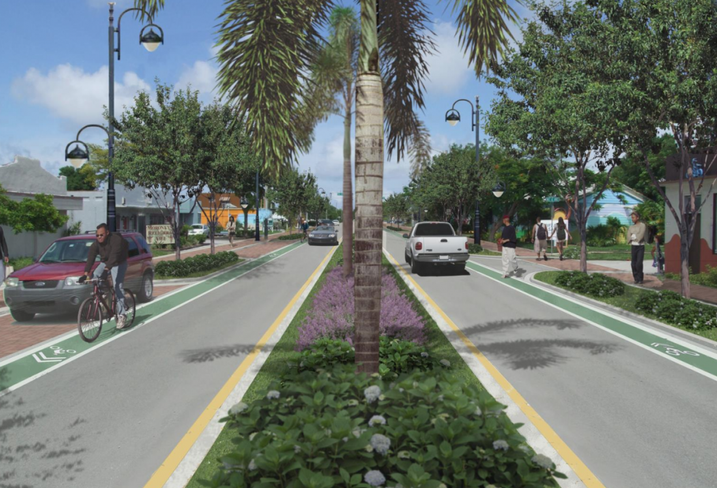 In 2015, Warsaw Coffee Co. opened at 815 NE 13th St. with a 3,800 SF space. It was founded by Scott Ojeda and Blaise McMackin, who had brought life to another unremarkable area on Andrews Avenue when he opened Tap 42 bar and restaurant several years prior. That business has grown into multiple locations throughout South Florida.

Over the past couple of years, as Warsaw Coffee developed a following, the city of Fort Lauderdale reduced a lane of traffic along 13th Street between Northeast Fourth and Ninth avenues. In its place came on-street parking and bike lanes. The city added streetlights and landscaping.

Fort Lauderdale spokesperson Chaz Adams said that the project was just completed last fall, and it is still early to measure its impact. But Jaime Sturgis, founder of Native Realty in Fort Lauderdale, isn’t waiting to declare the area a success.

Hey look who almost ran me over at the 13th Street Fest?! It's @urbnplanr ! Those new bike paths are really really pretty and appealing – especially if you go the wrong way on them. LOL #thousandpoundegg #fortlauderdale #bike #bikepath @rbxfl954 #streetfestival #wiltonmanors #neighborhood #beautifulday #community @redpearlyoga on the loose. #biketour #yellowbike

Sturgis is marketing several properties for lease, including a six-parcel portfolio owned by Abby Laughlin, who spent $3.5M assembling properties between 2016 and 2018 and has focused on bringing public art to the corridor.

Laughlin, who had previously found success selling properties she assembled and held for 25 years in Frederick, Maryland, said she has always been interested in adaptive reuse and incremental development. After retiring, she and her husband moved to Fort Lauderdale.

“If this is a place the city is investing in, it’s a place I should invest in," she said. "It’s right there in between Wilton Manors and Flagler Village. I saw that people are looking for new experiences. People are getting priced out of Flagler Village. This is a new opportunity for the creative class."

Laughlin painted exteriors of buildings, brought in some muralists and made connections with area arts groups. She said there is green space that gives it a “botanical feel.”

Smith’s 28-year-old son opened a thrift store called Oddballs in Laughlin’s 8K SF building. It serves beer and wine and has become a neighborhood hangout. Two women are opening a beer/wine/tapas place with garden seating out back soon, Laughlin said. She said she has letters of intent from a Pilates/juice bar concept and a doggy boutique called Bow Wow. Laughlin said her asking rents are $20 to $25 per SF, whereas Flagler Village is asking $45 and Las Olas $100.

Smith said young people are seeing Fort Lauderdale as a place to settle — in line with nationwide trends that have millennials choosing affordable secondary cities like Charlotte, Nashville and Denver over expensive urban centers like New York or San Francisco.

“A new art gallery is being discussed for the 900 block of 13th Street," Adams said. "Since the project has been completed, discussions of additional investments have been floated within the half-mile corridor, and we will continue to track these as they develop. Moving forward, dozens of new jobs are expected along this area of investment of the city to create many opportunities for our neighbors and reinvigorate the central city neighborhood.”

Adams noted that the city is also looking to rezone the 13th Street corridor area for both business and residential uses and as a walkable, active streetscape. Smith said he is pushing for flexible zoning that would allow live/work spaces such as offices with upstairs apartments.