Developers Challenged To Build 2-for-1 Homes And Donate 1

If Tom's Shoes can sell two pairs of shoes for the price of one and donate one of those pairs to a poor child, then certainly, developers could scale up that concept and build two-for-one houses. That is the idea behind Home4Home, which has a Miami-based developer challenging his peers to step up their charitable efforts in Latin America — and in turn, win customer loyalty. 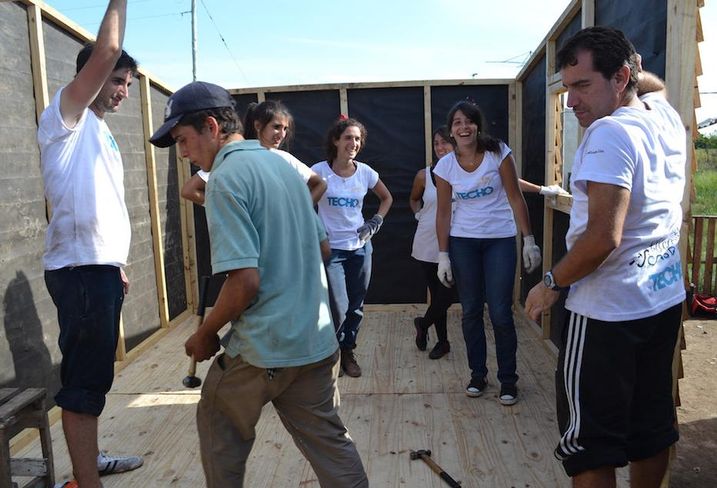 Techo Argentina via Flickr Creative Commons
A Techo project in Buenos Aires in 2014.

“We are launching the program as we speak,” BH Investment Group founder Andres Klein said.

Klein's projects include the development of the O Residences in Bay Harbor Islands and renovation of the Chase Bank building in Brickell. Before founding his own company, he was a managing director at Ackman-Ziff Real Estate Group, a New York investment firm.

Having grown up in Buenos Aires, Klein is well aware that 100 million people in Latin America live in slums. In February, Klein, along with Techo (a 20-year-old Latin American charity that means “roof” in Spanish), founded Home4Home. For each property that a participating developer builds, Techo will oversee the building of a transitional home in one of the 19 countries where it operates.

The program is set up much like an adopt-an-orphan program. Buyers who purchase homes from a participating developer will be informed that a second home is being donated. Those buyers can choose the country where the donated home will be built. When they move into their own new house, the buyers will receive a picture of and letter from their beneficiary family, along with a miniature replica of the donated house.

While Techo has built some 110,000 homes since its founding, the first set of transitional homes under Klein's program are currently being built in Argentina, Klein said.

“I'm funding the first piece of the program to show that my money and actions are where my mouth is,” he said. “The goal is to create a multiplier effect.”

He hopes that other developers will join in and eventually provide 500 transitional homes per year.

Klein said the logistics are not as complicated as one might imagine, because Techo has been active for decades and has systems in place.

“A lot of the sites were given by the government or municipality to transform slums into decent neighborhoods,” he said.

The transitional houses are small, about 40 square meters, and prefabricated, with an average cost of about $2,500; just a fraction of the typical $400K price tag on a U.S. home. Having a social responsibility plan will help participating developers differentiate themselves from the competition and seem especially attractive to Latin American buyers, Klein said.