Construct A Parking Garage 25% Faster With This Florida Builder's Technique

Team members at Florida-based Current Builders say they've developed a new technique that speeds up the time in which parking garages can be built. Their "column hung shoring system" can reduce finish times by about 25%. 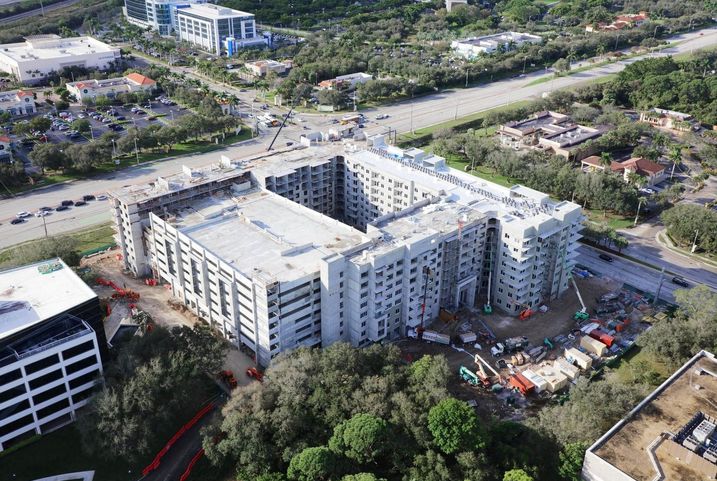 The company uses an innovative shoring system for perimeter beams.

“The system consists of a 60,000-pound column-mounted jack supported by wide flange W beams,” Executive Vice President Rolf Severtson said in a statement. “This system eliminates the need for re-shoring under the beams which reduces costs and time, and additionally provides a 7-foot working table for iron workers and carpenters.”

Usually, it takes 15 to 17 days to build a new floor of a parking garage. Using the new method in a project called Aura at Boca Colonnade — a 322-unit apartment complex with an eight-story garage — the Current Builders staff were able to add a new floor every 12 days.

Severtson called it “an important advance in the construction process for garages” and said it was developed by Mike Gillette, vice president of the Structures division.

In a video, Gillette said he was inspired by bridge-building techniques, and that the company hopes to market its technique as an alternate to pre-cast, post-tension garages:

Current Builders recently topped off the Aura Boca project and expects to complete it by December.