The Seminole Hard Rock Hotel & Casino in Hollywood, Florida, is set to unveil its $1.5B expansion, including the distinctive Guitar Hotel in the shape of an acoustic six-string, on Thursday. 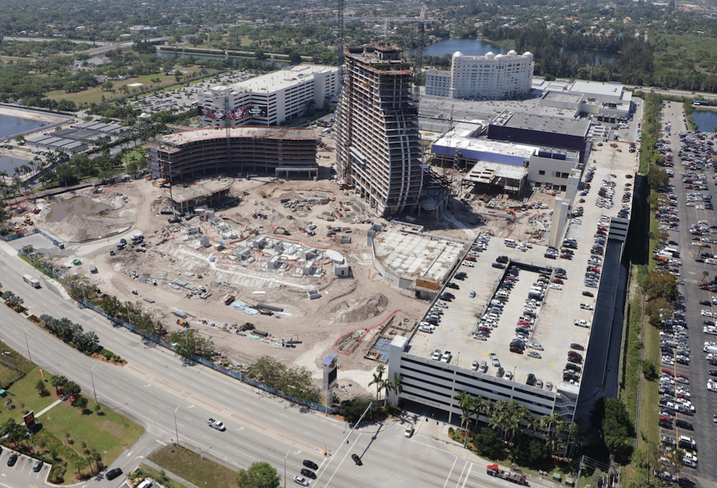 Entertainment is at the heart of the resort experience: the on-site concert venue, Hard Rock Live, was converted to a theater that can hold 7,000 people and be converted for TV and sports uses. Maroon 5 is scheduled to play the grand opening.

“We look at this as an adult integrated resort,” Hard Rock International CEO Jim Allen told WSVN Channel 7 news. “It is truly a destination that’s not just a casino.”

He has also said that, with the new arena, the hotel will soon announce world-class artists for Las Vegas-style residencies.

“With the previous facility, we were not able to attract the real residency-type situation with an artist,” Allen told the Sun-Sentinel. He called the venue “the most advanced entertainment facility in the United States."

"We spared no expense in creating something that is not just about live music, but it also set up for complete TV, any type of event, with Broadway, boxing, martial arts," he added. "It’s really a true entertainment destination.”

The Guitar Hotel stands 450 feet tall, jutting out conspicuously amid South Florida's flat landscape. The guitar "strings" are LED lights. There are 638 rooms in the building, and the expansion also includes another, seven-story, 168-room hotel building called the Oasis Hotel, plus a retail promenade with 20-plus stores, restaurants, a nightclub called DAER and a lagoon called Bora Bora. That all connects to the existing 195K SF casino, which has more than 200 table games and over 3,100 slot machines.

The Hard Rock's owner, the Seminole Tribe, operates as an independent nation, so "the county doesn’t collect taxes on the Hard Rock and has no figures on how much revenue and tourist traffic the resort generates," a marketing manager at the Greater Fort Lauderdale Convention & Visitors Bureau told the Sun-Sentinel.

Fun fact: the construction team that built it — Suffolk-Yates, a joint venture between Suffolk Construction and Yates Construction — had about 109 employees on the site, and 30% were female, including the boss, project executive Jessica Chen.

The Hard Rock's expansion was timed to be open before the nearby Hard Rock Stadium hosts the Super Bowl in January. An online booking tool showed the first two weeks have sold out, and weeknight rates starting at $199 after that.