How Do You Build A Guitar-Shaped Hotel? Ask Jessica Chen

Jessica Chen remembers the first time she heard that the Seminole Tribe was going to commission a $1.5B, 35-story hotel in the shape of a guitar, and that she would be in charge of building it. 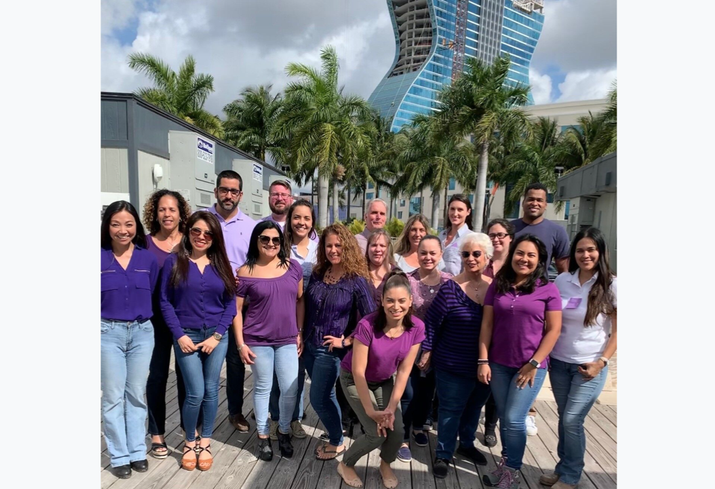 Courtesy of Suffolk Construction
The construction team in charge of building the Hard Rock's guitar-shaped hotel was 30% female.

"We were actually building a helicopter pad for the Seminole Hard Rock Hollywood when I first saw any renderings of this project," Chen told Bisnow. "I saw different versions in renderings only, and I could not believe that they were going to build this guitar."

Chen is a project executive for builder Suffolk-Yates, a joint venture between Suffolk Construction and Yates Construction, which was hired to design the casino/hotel.

"Fast-forward three years, and I received the phone call from my general manager letting me know that we had the project and that the east Tower" — the one shaped like a guitar — "would be the project I would run."

The guitar concept was proposed back in 2007 by Klai Juba Wald Architects, which gave the tribe a range of options, from conservative to experimental, as it considered a major expansion, according to ENR.

Plans were shelved during the recession but revived in 2013, when Jim Allen, chairman of Hard Rock International and CEO of Seminole Gaming, said, "Remember that guitar tower?" Klai Juba Wald architect Steve Peck told ENR. A tight timetable was set so the hotel could open before Miami hosts the Super Bowl in 2020.

Maroon 5 is slated to play the grand opening at the rebuilt 7,000-seat, on-site concert venue, Hard Rock Live. The guitar tower will have gaming suites on the upper floors, and two units on the 29th floor have private pools. LED lights serve as "strings" that go up the "neck" of the guitar.

One other fun fact about the project: The construction team that built it had about 109 employees on the site, and 30% were female. Nationally, only 3% of the construction industry is female.

Chen said the most challenging aspect of executing the project was that each floor was different because of the distinctive shape.

"There is no typical floor, like in other high-rise buildings," Chen said. "The guitar is not perfectly symmetrical by design, so there is no real flow, as from floor-to-floor the plate sizes change. From a Virtual Design and Construction perspective, Suffolk-Yates’ structural coordination, specifically the in-slab coordination, was extremely critical. With the pace of construction, our team submitted sleeve and opening drawings for design review for each level."

The existing facilities were operational throughout construction, so there were weekly logistics meetings with construction, hotel, casino and property operations teams so that neither revenue nor the guest experience were disturbed much during construction. During those meetings, Chen shared the VDC coordination models so that the staff could understand the construction processes and see the moving parts of the project. The builders were also able to get feedback on how the new construction ties into the existing structures and utilities.

Chen said she has been in construction for 25 years and seen the gender balance in the industry change considerably. She said the women she supervised have both confidence and technical expertise.

"Construction managers like Suffolk are investing in educating, training and enabling more women to enter and thrive in construction," she said.

She said that the Hard Rock was also supportive of women, and was named one of Forbes’ best employers for women in America.

"I’ve had the privilege to serve as project executive to the brightest, most hard-working, dedicated, and innovative men and women that collaborated and made both towers a reality," Chen said.