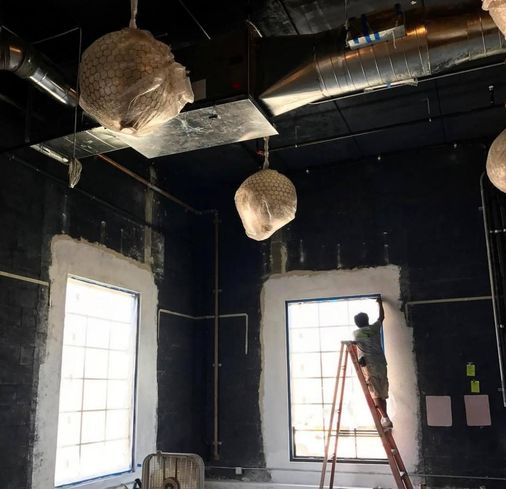 It will be the first such food hall in South Florida. Grandview Public Market will open this fall, a spokesperson announced Monday.

The 12K SF repurposed midcentury warehouse market was inspired by venues like NYC’s Chelsea Market and Krog Street Market in Atlanta. The facility will serve a major function as a meeting spot and hangout in the revitalized Warehouse District, also called "The District." Johnstone Capital Partners bought and has been updating eight vintage industrial buildings to the southwest of downtown West Palm Beach, along Elizabeth Avenue, catty-cornered from the Kravis Center for the Performing Arts.

The entrepreneurs envision an eclectic collection of vendors selling food, drinks and art, as in Miami's Wynwood District. Johnstone developer Hunter Beebe told the Palm Beach Post he is working on adding an indoor cycling facility, a squash club, and a pedestrian greenway along adjacent abandoned railroad tracks.

The younger Vila is a native of Palm Beach (his father, famous for the pioneering home remodeling show "This Old House," is from Miami) and founder of Vila Built, a renovation and development company that serves as the owner/operator of Grandview Public Market.

“West Palm Beach is experiencing growth as a community through development, the arts and an influx of young professionals, and we wanted to be a part of it," Vila said in a statement. "For GPM, we carefully curated select vendors that are as excited as we are to be involved and doing business in such a vibrant, flourishing community.”

The 12 vendors so far include three concepts from New York-based Three Kings Restaurant Group, which is comprised of "Top Chef" alumnus Dale Talde and his partners David Massoni and John Bush.

They will open Clare’s, a "premier chicken joint," and The Corner, a Detroit-style pizza eatery. They will also operate Little Red Truck, selling beer, wine and cocktails.

Other food vendors include Celis Produce, a boutique farm-to-table grocer; Grace’s Fine Foods, a full-service butcher offering fresh sausage and prepared foods; Rabbit Coffee; a Taiwanese shaved ice-cream, bubble-tea and breakfast cereal bar; Olive Oil of the World, an Italian specialty shop; and Zipitios, selling tacos and pupusas. There will also be a flower shop that offers floral workshops, a gift shop and two event spaces with free WiFi, The Loading Dock and The Living Room.

Vila hopes to expand to other Southern cities.